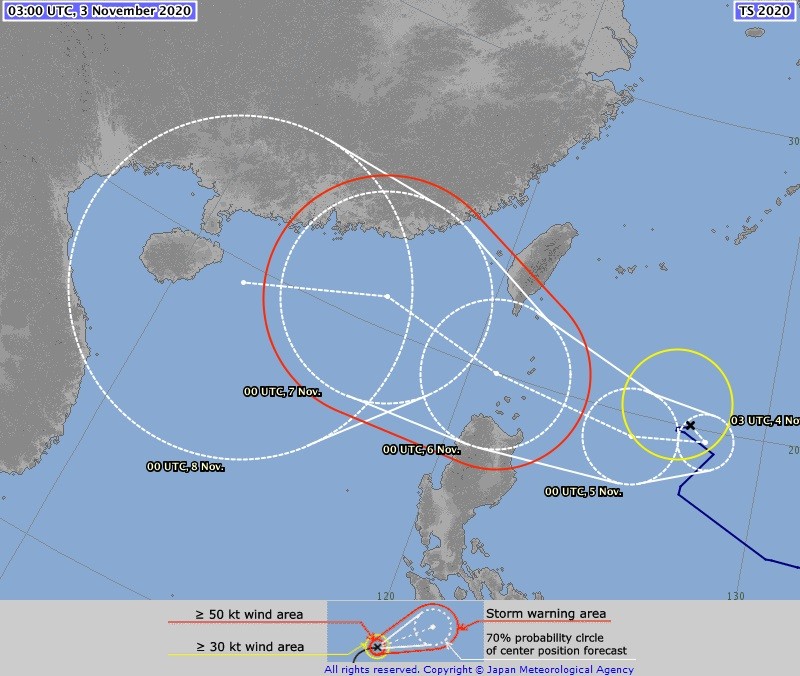 TAIPEI (Taiwan News) — Although the path of Tropical Storm Atsani is still uncertain, forecasters believe that the cyclone will bring rain and possibly more to Taiwan on Friday (Nov. 6), depending on the path it ultimately takes.

As of 2 a.m. Tuesday morning (Nov. 3), Atsani was located 740 kilometers southeast of Taiwan's southernmost point of Eluanbi moving east at a speed of 6 kilometers per hour (kph). The storm has a radius of 80 kilometers and is packing maximum sustained winds of 72 kph, with gusts of up to 100 kph. Taiwanese weather expert Peng Chi-ming (彭啟明) said the tropical storm is currently loitering to the southeast of Taiwan. He predicted that by Thursday (Nov. 5), a strengthening high-pressure system will push Atsani west towards the Bashi Channel.

The forecasted path for Atsani has shifted north compared to Monday (Nov. 2), and there is a chance that it could hit Taiwan directly. If it makes landfall in Taiwan, it would likely occur on Friday, when heavy rain could be expected throughout the country, especially the eastern half.

Peng said that if the storm passes through the Bashi Channel and its center is closer to the southern tip of Taiwan, as opposed to Luzon in the Philippines, the Central Weather Bureau (CWB) will likely issue a sea warning. If it follows a more northerly path through the Bashi Channel, Peng predicts that eastern Taiwan and the Hengchun Peninsula will see significant rain on Friday and unstable weather on Saturday, until Sunday, when conditions should improve.

The red lines on the CWB's predicted path for the tropical cyclone have expanded since yesterday, indicating that the path of uncertainty is high. Meteorologist Wu Der-rong (吳德榮) said that Atsani will reach a point of divergence today. Wu said some models predict the storm will shift north to the seas off the coast of eastern Taiwan, while more models have the cyclone moving over Luzon and into the South China Sea. Wu said that due to the high degree of uncertainty of the weather models, more observation is required to determine the extent to which the storm will affect Taiwan on Friday.