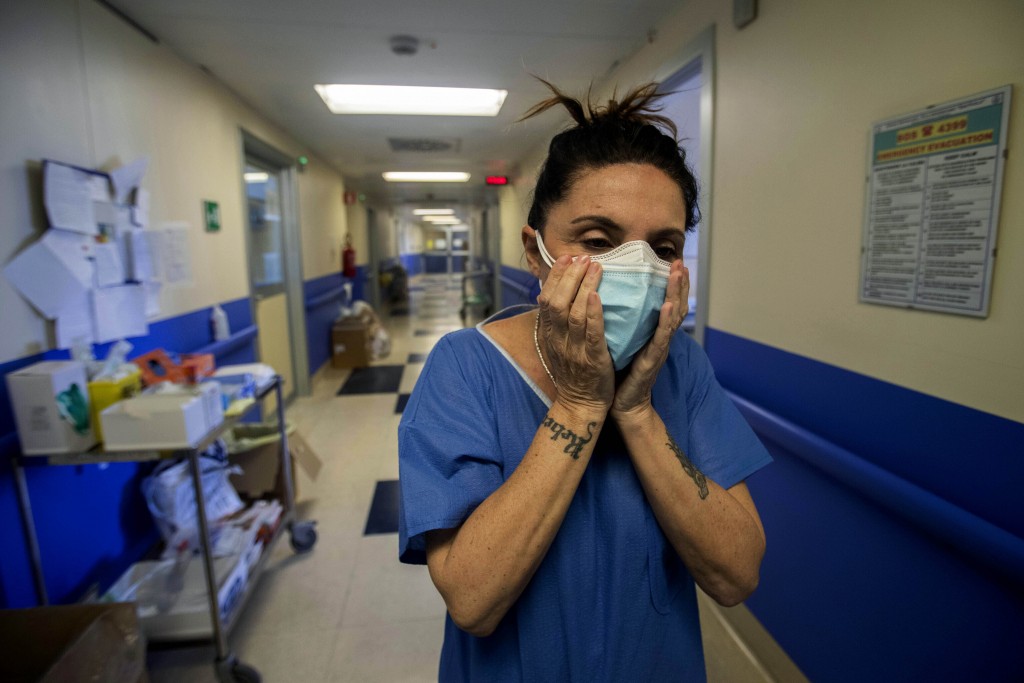 In the winter of 2019, a new disease spread from Wuhan, China, to other parts of the world.

The pathogen was found to be a coronavirus and was named by the World Health Organization (WHO) as CoViD-19 (CoronaVirus Disease 2019).

In the fall of 2020, CoViD-19 continues to rage on. Some areas seemed to have gained control only to see a surge of the case numbers, forcing them into further lockdowns.

Some even verbally or physically attack others who do not wear masks because CoViD-19 can cause death.

However, how does a person get “confirmed” with CoVid-19? What are the meaning and consequences of being “confirmed”?

To treat a disease, the goal should be to reduce either mortality or morbidity. Effective treatment requires accurate diagnosis; accurate diagnosis relies on correct history, meticulous examination, and precise sample testing or imaging (collectively called “tests").

Nevertheless, few things in the world are absolute. The basis of statistics is to improve the accuracy of events using probability.

Bayes’ Theorem illustrates that whenever there is additional good evidence, the diagnosis becomes more accurate. Sometimes even the diagnosis of “death” may not be exactly “confirmed,” which is why there is a distinctive definition of cardiopulmonary death versus brain death.

Being confirmed does not always represent 100% certainty. Rather, it is a decision made when there is a high enough probability to do so.

For the symptomatic patients who require remedy, straightforward and concise treatment is often more economical, although the cost of making a diagnosis may be increased by the use of tests to improve the accuracy of the diagnosis; on the other hand, there will be more variables when we are dealing with asymptomatic patients.

How positive can a “positive” test be?

All students of statistics know that every piece of information has its sensitivity and specificity. The sensitivity of tests represents the proportion of positive results among the patients who truly have the disease, i.e. true positives divided by the sum of true positives plus false negatives; the specificity represents the proportion of negative results among the people who truly do not have the disease, namely true negatives divided by the sum of true negatives plus false positives.

The problem is how we determine who really has or does not have the disease. This requires a pre-existing gold standard. The denominators in the calculations above will be unclear if there is no such standard.

Another problem is how one determines what is true or false in the test results. To diagnose the people suspected to have the disease based on the materials used, the developer of a test usually needs to perform the test on the “normal” subjects to derive the “normal value/range.”

But what is the definition of “normal” subjects? How wide should the range of the “normal value” be to be reasonable? Without solving these problems, it will be difficult to “confirm” the asymptomatic patients with simply the tests.

“Screening,” the process of using reasonable tests to identify the diseased from a cohort of asymptomatic people, is like casting a net to catch fish. To be cost-effective, one needs to go where there are more fish (the cohort with more diseased) to cast the net (screening). To catch more fish in one shot (to increase the sensitivity), one can increase the size or the density of the net (raising the positive rate or reducing the “normal range”), although the size of the fish will become more varied (decreased specificity due to increased false positives).

Conversely, to catch big fish only (to increase specificity), the net has to be loosened to the desired density (raising the negative rate or widening the “normal range”), though fewer fish will be caught (reduced sensitivity because of increased false negatives). Therefore, successful screening requires a balance between the sensitivity and specificity of tests in order to reach the maximum benefit with the most reasonable minimum cost.

With improved knowledge, there have been several revisions to the diagnosis, pathophysiology, and treatment of CoViD-19. However, there are still different opinions on how tests should be conducted.

Should one test the nucleic acid, the antigen, or the antibodies? How should the screening be performed? Which data sets are useful?

There are proteins on the capsid of CoViD-19 that can be identified by the immune system as antigens for antibody production. As antigens and antibodies are proteins, detection of their presence is mostly accomplished by using their monoclonal antibodies as the testing reagents. The testing procedure is faster; however, it takes longer to develop the tests.

The core of CoViD-19 is made of ribonucleic acid (RNA). The existence of RNA can be amplified and demonstrated with a polymerase chain reaction (PCR). Taking advantage of the heat resistant characteristic of the polymerase, the 1993 Nobel Chemistry Prize-winning method repeatedly alternates the temperature of the chemical reaction in cycles to replicate the copies of the nucleic acids in the order of 2n.

Although the test procedure takes a longer time, it is simpler to set up the tests. As a result, PCR has become the most commonly used test for viruses, with the results reported as “positive” or “negative.”

A negative PCR or antigen result can be due to insufficient target in the sample to detect, which can be related to incorrect sampling location, inactive reagents, non-exposure, low viral count in the body, or cured status, etc. Therefore, a negative result does not provide the status of the disease in the past or near future.

A “positive” PCR test occurs when there is enough RNA in the sample to be replicated to the point of being “seen.” This is the “confirmed” result most people understand.

However, many “confirmed” patients have no symptoms. Besides, most patients do not transmit the disease ten days after the symptoms occur.

At the beginning of the pandemic, data from Wuhan suggested that the “reproduction number” (R0) was two to three, which was later revised to 5.7, as the doubling time of the infected patients changed from five to six days to two to three days.

This means each host can transmit the virus to 5.7 patients. If this is true, the pandemic will not end until 82% of the population acquires the disease.

Another popular quote is that “herd immunity” will not occur until 50 to 60% of the population is infected. The truth? Let us examine the extreme examples of what happened on the ships with outbreaks.

On the Taiwanese military vessel Panshih, 36 of the crew of 337 came back positive with PCR testing while eight showed the presence of CoViD-19 antibodies in their blood (13%) after a month-long mission.

Obviously, the estimate based on an R0 of 5.7 is unrealistic.

Moreover, even if 87% of the sailors on the Panshih had eradicated CoViD-19 in one month, antibodies should not be detected in only eight soldiers. If one argues that the ships do not have enough sample size, then Sweden, with its population of over 10 million may offer some useful information on the spreading of CoViD-19, as it never had mandatory lockdown or mask-wearing.

After 10 months, we now realize that CoViD-19 indeed is another coronavirus, spreading in clusters from a “superspreader” while some hosts never transmit the virus. The problem is that no one can predict the “superspreader.”

Without an effective vaccine, to reach the magic number of 20% CoViD-19 positive rate, it still will take a long time, especially if an additional lockdown is applied.

Meaning of a “Positive” CoViD Test

Other issues that have been debated are the relationship between “positive” PCR results and either severe consequences or death as well as whether the lack of generalized screening leads to a lower “confirmation” rate.

In PCR, a positive result is obtained when a small quantity of nucleic acid is amplified with multiple cycles of chain reaction. The question is how many cycles are considered reasonable for a positive result. The cycle threshold (CT) is the cycle number required for a PCR test to be called positive.

An article from the New York Times on Aug. 29, 2020, indicated that in Massachusetts, Nevada, and New York, 90% of the positive CoViD-19 tests had only a barely detectable amount of nucleic acid.

Some required 40 cycles, while most virologists feel that a threshold of 35 cycles is too sensitive. Likewise, the Centers for Disease Control and Prevention (CDC) in the U.S. found that there was rarely any live virus when the CT was above 33 cycles.

If the CT were lowered to 30, then in Massachusetts, 85 to 90% of the cases “confirmed” to be positive with a CT of 40 in July 2020 would have to be reclassified as negative.

Therefore, the consensus is that a reasonable CT should be between 30 and 35 cycles because it is not practical to have too many “confirmed” cases that do not transmit the disease. Additionally, to reap the maximum economical benefit, PCR should be used to screen the people with a need for the test, and the test should be repeated every six to 15 hours to detect the disease early.

What about generalized screening? After it was implemented in Germany for two weeks, the laboratories were already overburdened.

Are We All Going to Die?

In 1918, the Spanish Flu caused 50 million deaths. The population then was 1.8 billion.

The death rate has continued to decrease since the summer of 2020, despite the increase of “confirmed” cases after the lockdown was lifted. The mortality could have been lower, if not for the >10% death rate in some areas due to the lack of understanding and insufficient preparation in the early stage of the pandemic.

Should we be scared? Without an effective vaccine, the high-risk population must be protected. Using the current criteria, many “confirmed” CoViD-19 positive patients are not symptomatic or contagious.

With the media reporting only the number of cases or deaths without the prevalence or death rate, mental stress and excessive waste of resources have been observed.

Public health institutions and testing sites can consider adjusting the threshold values of the PCR, antigen, and antibody tests to reach the best balance between sensitivity and specificity.

Most healthy people have a low likelihood of serious symptoms and death. They should be able to continue their lifestyle after the symptoms subside, even when they are infected.

The healthcare systems should maintain an adequate reserve of equipment, supplies, and personnel to minimize long-term sequelae and mortality. The people and the government will have to seek a balance between the duration of an epidemic and the economy.

Without self-discipline on interpersonal contact, healthcare systems may collapse when too many patients have to visit the hospitals at the same time; too much restriction may also bring down the economy if the epidemic drags on too long.

The media reports should be accurate and useful without spreading misleading or politicized information that can lead to panic.

Dr. Hue-Teh Shih (施惠德) is a cardiology specialist in Houston, Texas. Shih obtained his M.D. degree from the Harvard School of Public Health in 1982 and was appointed as a public health advisor by ChinaAid in early 2020. He has operated his own practice and served as the President of the Chinese American Doctors Association of Houston.