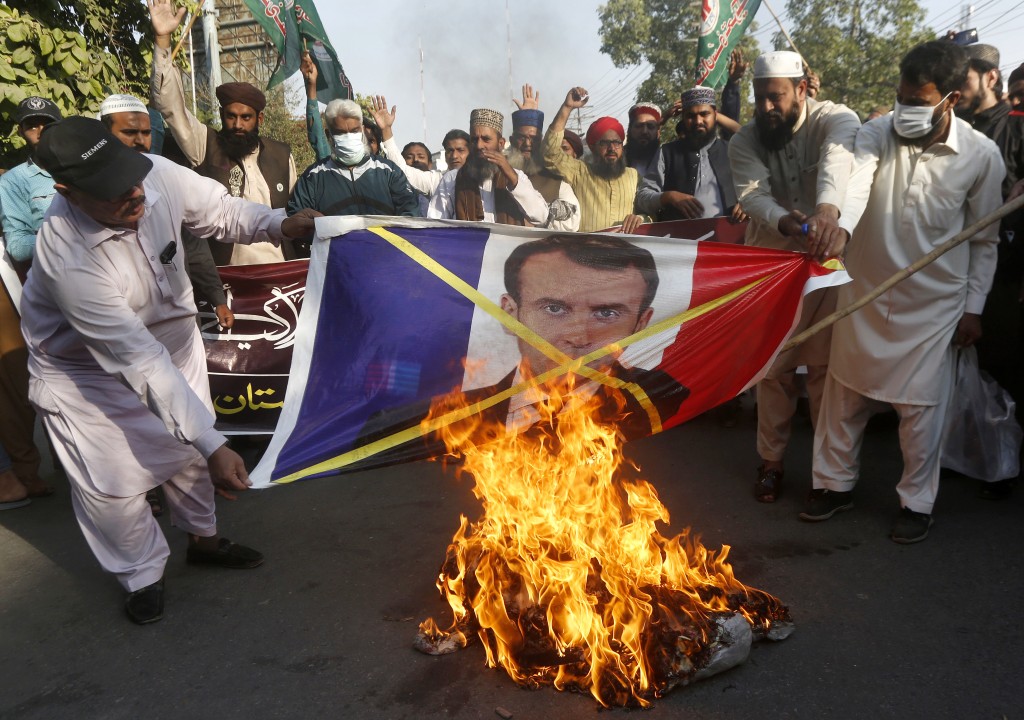 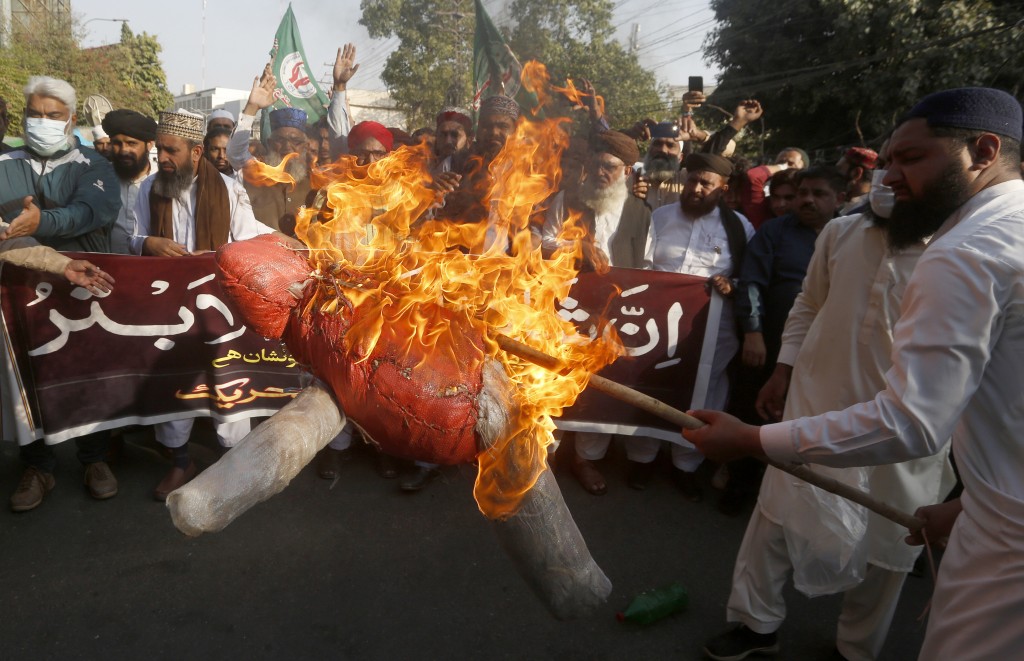 KARACHI (AP) — Hundreds of protesters in Pakistan on Sunday burned effigies of France's leader and chanted anti-French slogans, as President Emmanuel Macron tried to send a message of understanding to Muslims around the world.

The demonstrations, which followed anti-France protests across the Muslim world last week, came after President Macron's interview late Saturday in which he said that he understood the shock Muslims felt at caricatures depicting the Prophet Muhammad. Macron was speaking in with the Qatar-based Arabic TV station Al-Jazeera, where he also defended freedoms of expression and France's secular values.

Macron’s office said the interview was aimed at clarifying misunderstandings around France’s position and the president's words which they say have been taken out of context.

“I have never said that,” Macron told the Al-Jazeera interviewer, explaining that some false translations of his words in the media showed him to support the cartoons mocking Prophet Muhammad. “Those are lies.”

Macron explained that all religions are subject to the freedom of expression and “these drawings.”

“I understand and respect that people can be shocked by these cartoons,” he said. “But I will never accept that someone can justify the use of physical violence because of these cartoons. And I will always defend freedom of speech in my country, of thought, of drawing.”

The interview set off a storm on social media, as many argued the Qatari station erred by giving space to the French President, whom they said failed to apologize for offending Muslims. Others criticized Macron for choosing Al-Jazeera, a station that has been at the center of political disputes between Arab Gulf nations and viewed by many as giving airtime to hardliners and Islamist groups, outlawed in many countries in the Middle East.

The protests in Muslim-majority nations over the last week, and calls for boycotts of French products, began initially after Macron eulogized a French teacher in Paris who was decapitated for showing caricatures of the Prophet Muhammad in class. Two attacks followed on a group of worshippers in a church in Nice, and a Greek priest in Lyon.

Islamist groups and hardliners around the Muslim world have rallied their supporters against the caricatures and the French government’s staunch secularist stance, keeping up protests over the last week targeting Macron.

On Sunday in the Pakistani city of Karachi, hundreds of supporters of the main Islamist party, Jaamat-e-Islami, set an effigy of Macron on fire. The crowd of about 500 chanted against Macron and called for the boycott of French products.

Earlier Sunday in Karachi, Shiite students marched for three kilometers (1.8 miles) chanting and pledging to sacrifice their lives for the honor of Islam and its prophet. Some 500 students, including a couple hundred women, dragged French flags on the floor and carried pictures of Macron. One banner depicted Marcon’s face with a big cross.

“We condemn blasphemy of Islam and Prophet Muhammad by French President,” read a slogan scribbled on a French flag.

In central Pakistani city of Multan, hundreds of merchants rallied in a demonstration to call for a boycott of French products. The crowd also burned an effigy of Macron and chanted: “Muslims cannot tolerate blasphemy of their prophet” and “the civilized world should give proof of being civilized.”

In Beirut, a dozen protesters marched to the French Embassy in the Lebanese capital, raising banners that read: “Anything but Prophet Muhammad,” and chanted in defense of Islam. Security was tight around the embassy.