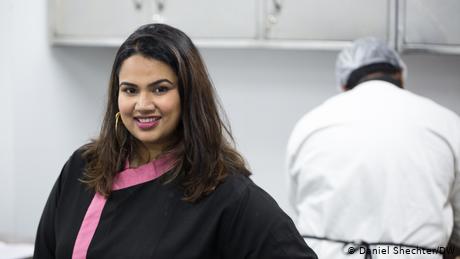 Pastry chef Pooja Dhingra (main picture) runs a successful chain of cafes in Mumbai. She had many plans for this year, but the coronavirus pandemic has pushed her to the brink of losing everything she had worked for over the last decade.

After India entered a 21-day nationwide lockdown in March this year, business owners didn't know what to expect. Dhingra closed her Le15 Cafe & Patisserie in Mumbai's Colaba area and halted operations for what she had hoped would only be 10 days.

"I thought it would be only for 10 days," Dhingra told DW. "At that point, I hadn't taken a break in nearly 10 years. I thought I was going to embrace it and, in 10 days, would figure out a way forward."

Weeks later, Dhingra had no choice but to announce the closure of her cafe. It was impossible to run the business when customers were no longer allowed to dine out. At first, she called lawyers to see if she could file for bankruptcy.

At that point, she had two choices: shut everything down, or take control. She chose the latter, after realizing the pandemic could in fact give her a new opportunity.

As businesses were shutting their doors across the country, Dhingra saw that more people were also beginning to bake at home. She decided that a good long-term plan would be to enter the packaged goods market and convert her Le15 cafe into something that could be "found on shelves" nationwide.

She launched a range of packaged cake mixes and "dipkies" — cookies to be dipped in hot beverages.

"We put our heads down and published an e-book to cover the salaries of our employees. I also started taking online workshops," said Dhingra

"This did not happen overnight," she added. "In the past, I would work on something until it fit my image of perfection. With the pandemic, I understand that I can't take another day for granted. If something needs to be done, it should be done today."

The pandemic has also allowed some home-based businesses to flourish. Boju's Kitchen ­— or, "grandmother's kitchen" — is run by 83-year-old Maiyya Thapa, her children and grandchildren — all from their home kitchen.

Each year, Thapa travels from the town of Siliguri to her daughters' homes in New Delhi to escape the northeastern cold.

This year, however, she was forced to stay much longer in New Delhi than usual due to the coronavirus. Thapa has earned a reputation for making some of the city's best homecooked dumplings, known locally as momos.

"Our journey began during the lockdown, with my friends spending hours under our house — all for a taste of my grandmother's momos," said Chitrangada Gupta, who started Boju's Kitchen alongside her grandmother and her mother Arati Thapa.

Only Arati and Thapa know the recipe behind the dumplings' "secret filling," which Gupta told DW makes all the difference.

But running the new business is not short of its own challenges. "The orders are increasing with each passing day, which means we need a new kitchen," said Gupta, who recently signed a lease for a new space for their growing business.

The family said most customers don't want to pay a delivery fee with their order, which then eats into their own costs. But the team is optimistic and have begun adding special dishes to their menu for the festive season.

"We have received so much love, which makes it worth it. The small team that we've put together — from the help in the kitchen to those responsible for delivery — work hard every day to deliver 'Boju's' love to more homes."

India's migrant communities, meanwhile, have been particularly hard hit by the impacts of the coronavirus lockdown. As workplaces shut down, thousands of migrant workers have had their incomes suspended.

One Rajasthan community, located inGurgaon's Banjara Market, southwest of Delhi, witnessed the immediate impacts of the lockdown. Their once popular flea market, home to unique antiques and vintage furniture, abruptly turned into a ghost town.

Srishti Tehri, a 25-year-old fashion media graduate, was shocked to find the once bustling market deserted when she stopped by one day hoping to purchase a mirror, only to realize she was their first customer of the day.

Tehri immediately felt compelled to take action. She returned home with photos of the market's ceramics, designed a logo, and posted the photos on Instagram in the hopes of catching people's interest.

The response was overwhelming. In her first sale, Tehri received 131 orders and sold nearly 800 items. Tehri officially launched the "Artisans of Banjara."

"This wasn't a fundraiser, but a platform for Banjara Market's artisans to harness the power of the internet," she told DW, adding that it wasn't easy. Tehri was responsible for successfully delivering the fragile ceramic works to clients and ensuring customer satisfaction.

But it was all worth it in the end, she said. Money was finally flowing back into Banjara Market, and as the country lifts further coronavirus restrictions, more customers are returning.

For now, Tehri is taking some time off to travel. But she doesn't want her relationship with the artisans of Banjara to end just yet. "I will come back, scale up, and get back to helping as many people as I can," she said.