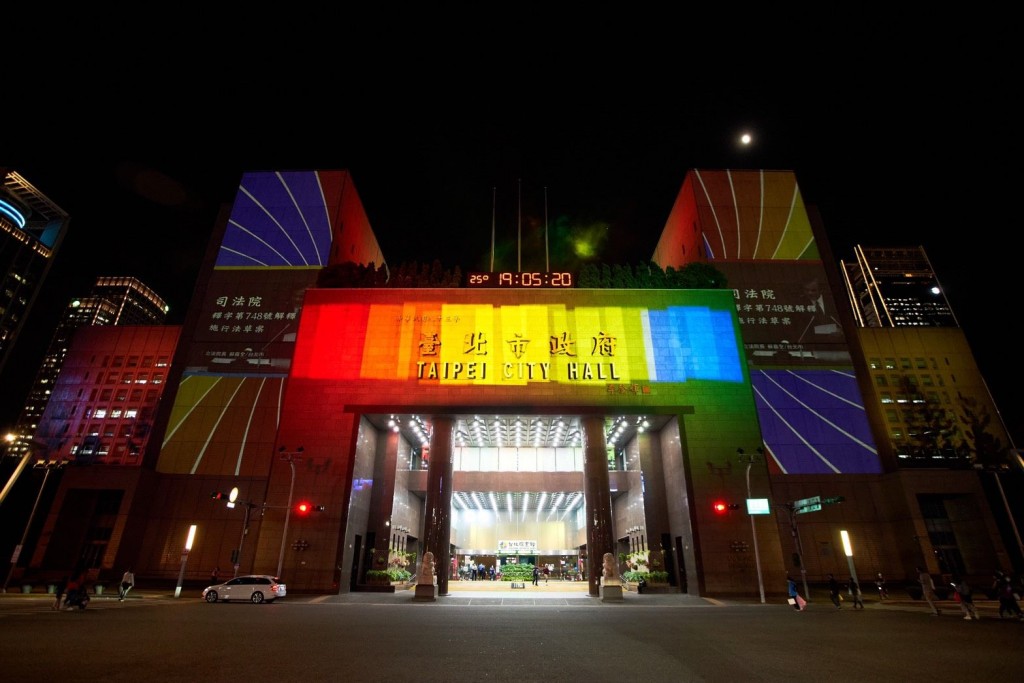 TAIPEI (Taiwan News) — The facade of the Taipei City Government building was lit up in rainbow colors on Thursday evening (Oct. 29) in honor of the Taiwan Pride parade, which will kick off Saturday afternoon (Oct. 31).

The light show comprises a series of projections that sketch out the development of the capital and tell the story of Taiwan’s legalization of same-sex marriage, according to the city’s tourism chief Liu Yi-ting (劉奕霆). He added the office has launched a number of activities in October to honor the Pride parade, which celebrates its 18th anniversary this year, and to promote tourism. The display was scheduled to run from 6 to 10 p.m. on Thursday and Friday and from 7 to 10 p.m. on Saturday due to the Pride's follow-up performances at Taipei City Hall Saturday afternoon. The show starts every 30 minutes and lasts about five minutes.

At 7:30 p.m. on Friday, the projection was to feature a one-hour live show put on by DJ Ro.Z, noted Liu. The city government will continue its efforts to make Taipei one of the most liberal cities in the world in terms of equality, he added.

Taipei recently joined the Rainbow Cities Network, an initiative launched by the Netherlands to promote LGBT-friendly societies on a municipal level. Taipei is the first Asian city to be accepted into the network and the 31st member, the city government announced Tuesday (Oct. 27). The parade will set out from Taipei City Hall at 2 p.m. Saturday. Participants can choose to take either the “north” or “south” routes, which pass through Zhongxiao East Road and Xinyi Road, respectively, before returning to the starting point around 4:20 p.m. Taipei's Pride parade has billed itself as the largest such event in Asia and draws larger numbers of overseas revelers to Taiwan every year. However, the organizer, the Taiwan Rainbow Civil Action Association (TWRCAA), has said that in view of the pandemic, far fewer participants are expected to participate in this year's parade compared to 2019's, which attracted nearly 200,000.

Nevertheless, the parade is still likely to be the only and the largest LGBT parade held in the Northern Hemisphere in 2020. Dozens of local and international enterprises and NGOs have formed their own groups to join the procession.

Led by its representative Guido Tielman, the Netherlands Office in Taipei will take part for the first time. The office said it has prepared 200 T-shirts as gifts for those who take a picture with office staff at City Hall before the procession sets out.

Also joining the festivities Saturday are employees from the representative offices of the EU, U.K., and France. For those who cannot join the celebration in person, the TWRCAA, with funding from Google.org, will stream the parade on its YouTube channel.