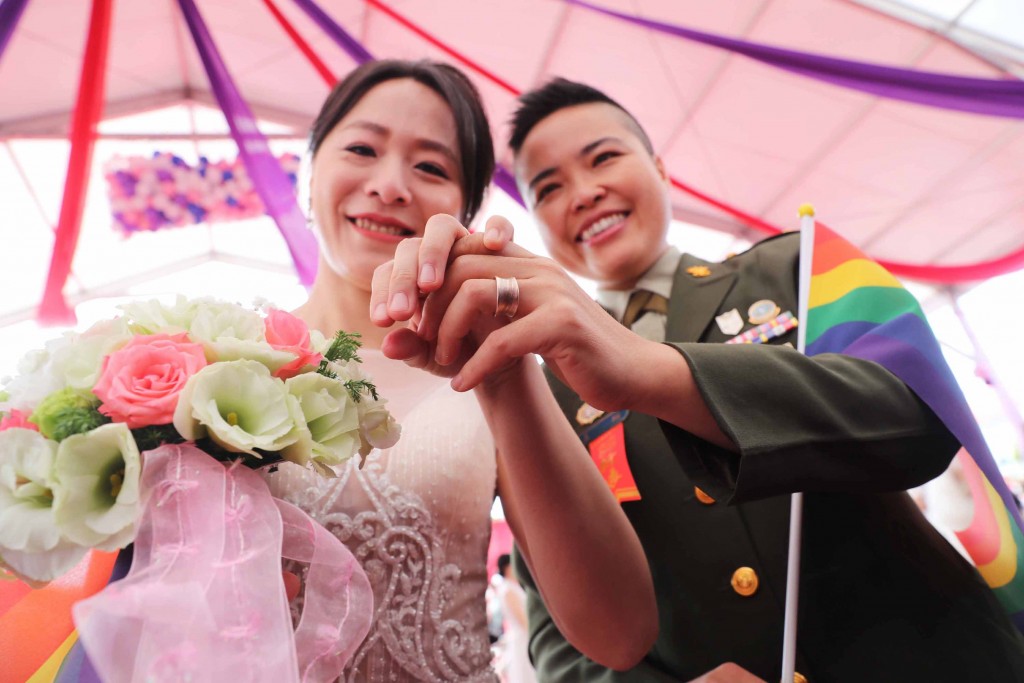 One and a half years since Taiwan became the first country in Asia to legalize same-sex unions, two same-sex couples took part in a military joint wedding for the first time in the country's history. The two same-sex pairs, Major Wang Yi (王翊) and Yumi Meng (孟酉玫) and Lieutenant Chen Ying-hsuan (陳瑩宣) and Li Li-chen (李沴稹), were among the 188 couples who took part in the ceremony. This year's joint weddings for the Army, Navy, and Air Force all took place on Friday, with the collective ceremony for the Army held at Dahan Base (大漢營區) at 8:30 a.m. The mass wedding for the Navy took place at Haiying Base (海鷹營區) at 2 p.m., and the Air Force's group ceremony was held at Tainan Air Base at the same time.

The "Enforcement Act of Judicial Yuan Interpretation No. 748” was passed on May 17, 2019, and same-sex couples could register for marriage starting May 24, 2019. In accordance with the law, the Ministry of National Defense also began allowing same-sex marriages for enlisted service members. Three same-sex couples initially signed up to be the first to take part in the joint military weddings last September. However, they later dropped out of the Navy and Air Force ceremonies before they took place, and the Army did not register any same-sex couples.

This year, it was the Army that led the way with two couples. Wang's mother told CNA that the military has a very progressive attitude toward same-sex marriage. She added that "more importantly, it enables those who come out of the closet to live with peace of mind. The happiness of the children is the expectation of the family."

Meng said her parents' view on the marriage is still "in the works." Nevertheless, she said she believes they will ultimately give her recognition and support in the future. Chen expressed hopes to AP that the couples' participation in the ceremony will inspire others in the LGBT community: “We are hoping that more LGBT people in the military can bravely stand up, as our military is very open-minded. In matters of love, everyone will be treated equally." Chen and Li both wore rainbow wristbands at the ceremony, and Chen said that she has "always been open about her sexual orientation while serving." The two couples together. (AP photo)