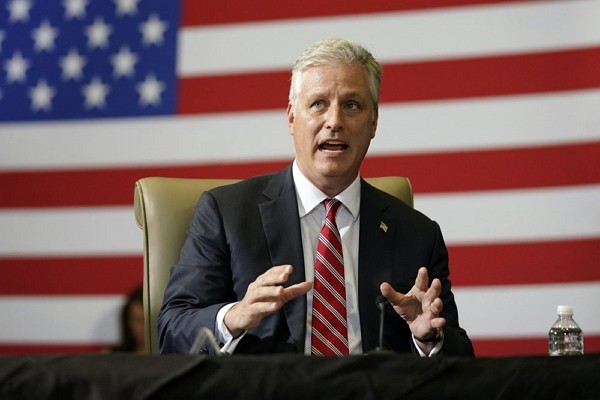 TAIPEI (Taiwan News) — U.S. National Security Advisor Robert O'Brien has promised that the American government will ensure freedom of navigation in the Taiwan Strait in response to Beijing's sweeping claim over the public waterway.

During a speech at the Hudson Research Institute on Wednesday (Oct. 28), O'Brien highlighted the importance of the U.S. confronting Chinese threats to democracies. He said the idea that Beijing would reform its political system after economic success has proven unrealistic and that the U.S. must directly challenge the authoritarian regime over its attempts to control the "free world."

O'Brien pointed out that a global trend against Chinese interference has emerged as a result of U.S. President Donald Trump's sledgehammer approach to the country's relationship with China. He said the president has held Beijing responsible for its forced transfers of technology and intellectual property theft around the world.

The White House official warned that Beijing would monitor individuals outside of China if it gains control of global 5G networks. He further stated it would have access to "every bit of personal data," including medical records, financial transactions, and emails, worldwide without restriction.

O'Brien stressed that Chinese technology giant Huawei "takes direct orders" from the Chinese Communist Party (CCP) and that its 5G products are serious security threats to users. He added that the UK, Denmark, Taiwan, Poland, Sweden, and the Czech Republic have all joined the U.S.' push to switch to more trusted suppliers instead.

In regard to developments in the Indo-Pacific region, O'Brien remarked that the U.S. will help safeguard freedom of navigation in the Taiwan Strait and South and East China Seas. He said the U.S. has collaborated on maritime security as well as terrorism prevention with Australia, New Zealand, India, Japan, Thailand, and the Philippines.

O'Brien also expressed concern that the CCP is collecting people's DNA by offering free genetic testing in countries around the world. He said this is extremely worrisome, as such information could be used to set up a large database for specific groups and ethnicities, reported VOA.