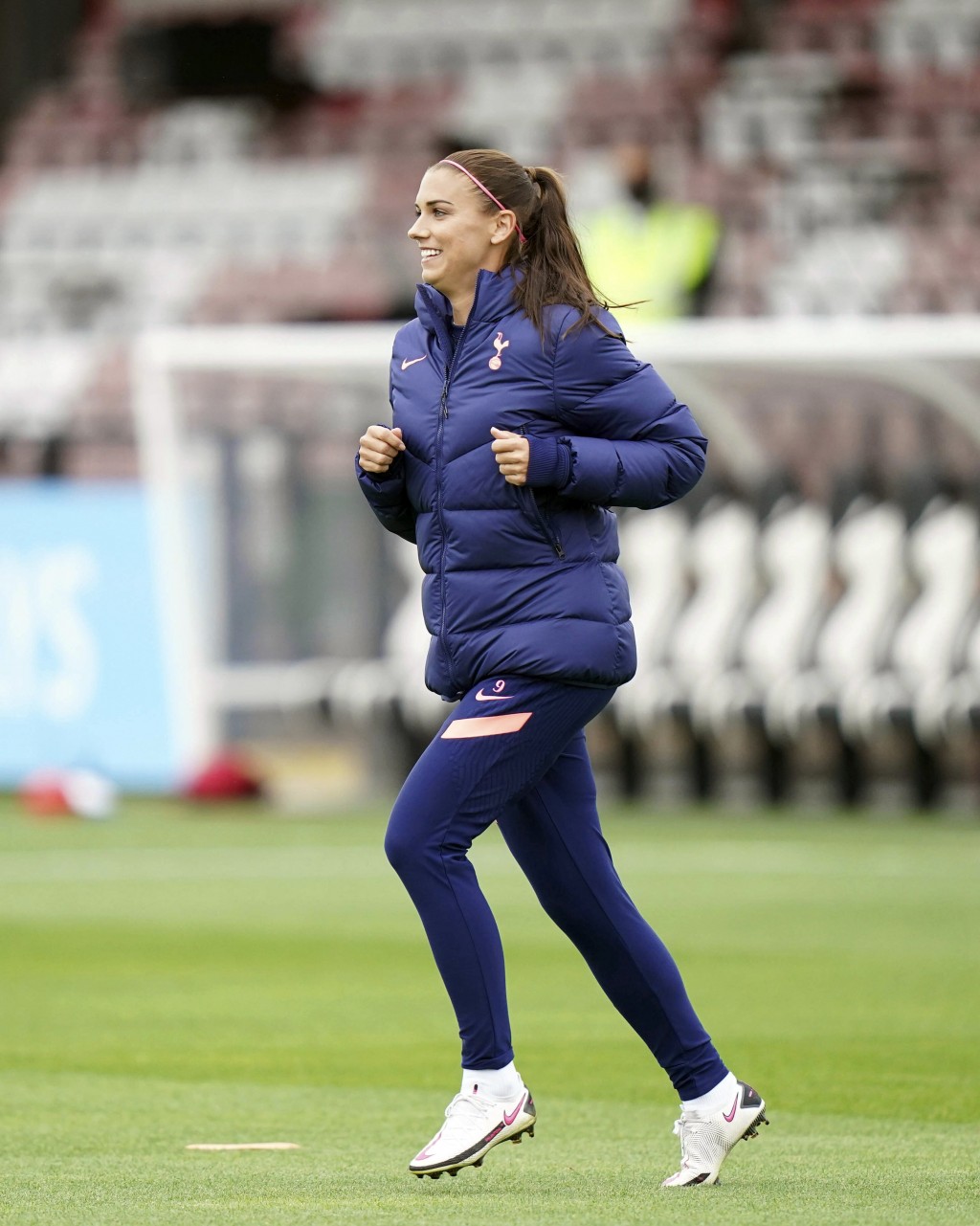 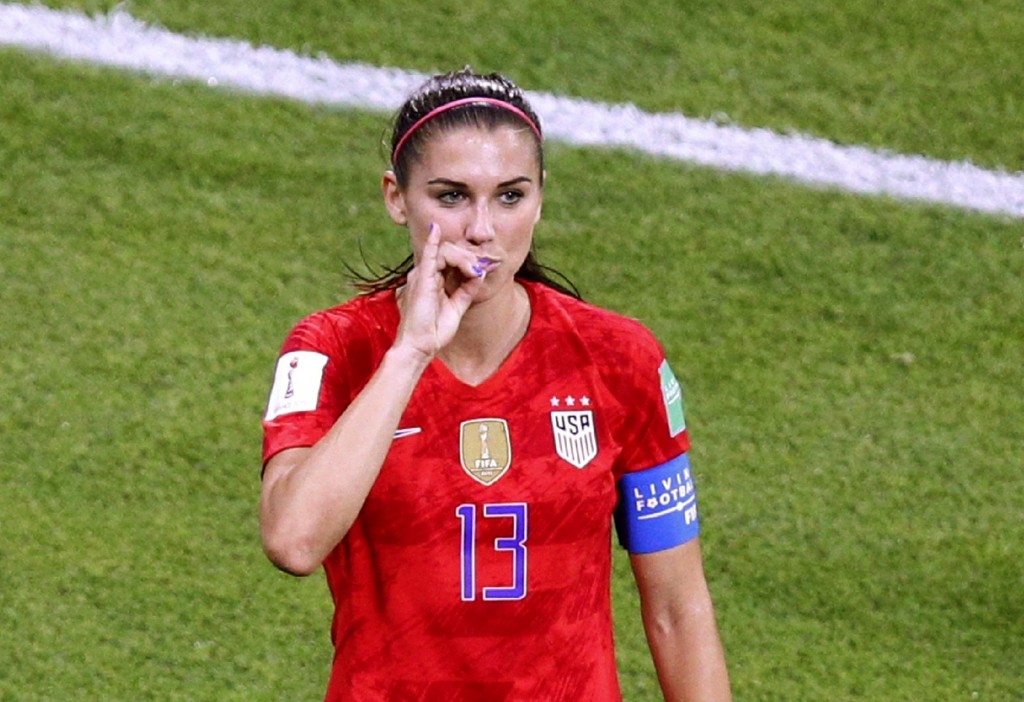 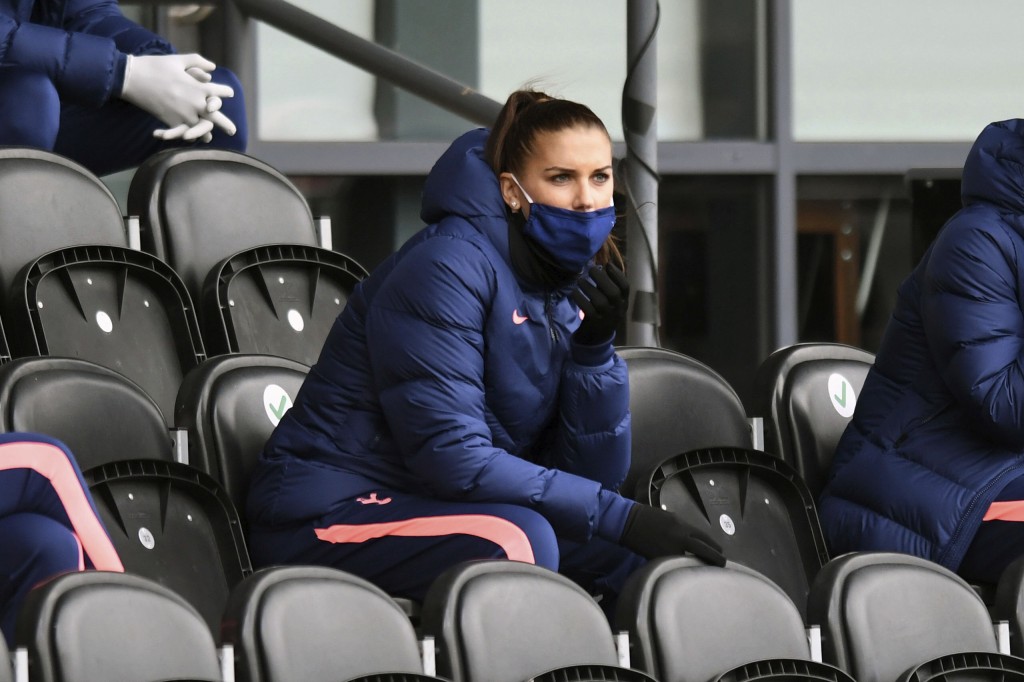 LONDON (AP) — A dog barks on a neighbor’s balcony as Alex Morgan hankers for what she’s missing in London.

“I’m pretty upset they aren’t here with me,” the American World Cup winner says of Kona and Blue, the dogs she rescued from an animal shelter. “It was such a spontaneous thing signing for Tottenham that I wasn’t able to get all the paperwork set up in time for them. So, they’re still in Florida, but they have a pretty good life.”

Life for Morgan is still a waiting game at Tottenham. A month after hoping to make her debut in the Women's Super League, the 31-year-old forward is still trying to regain match fitness after giving birth in May to daughter Charlie Elena Carrasco.

“There’s times definitely where I think stress builds up or I kind of get a little too anxious, but I think that I’ve handled it quite well,” Morgan said in an interview with The Associated Press. “Hopefully in the next two weeks I’ll get on the field with team because we’ve had quite a tough run, especially in the month of October. So, I really want to help the team.”

That requires patience and has been helped by the WhatsApp group with fellow players she taps into for tips on returning to action after pregnancy.

“It starts with just getting your core strength ... stretching a lot,” she explained. “Doing balance work because your balance is all off when you’re pregnant.”

It's been 14 months since Morgan played a match after being initially sidelined with an injury before taking maternity leave.

“You just can’t replicate all the changes of direction,” she said. “The amount of decelerations and that puts a toll on your body, especially my body, that’s just gone through building and creating, growing a human. So, I kind of had a little setback with my knee. It’s nothing too serious.”

Morgan feels she is already making an impact at Tottenham, without contributing in games -- particularly when it comes to striving for greater equality between men's and women's teams. Morgan is part of the group of American players embroiled in a legal fight with the U.S. Soccer Federation over discriminatory working conditions and pay.

“I’ve had conversations with the club about that,” she said. “Obviously, a lot of companies, a lot of clubs and organizations are struggling right now financially because of COVID. I think that there’s always progress that needs to be made within the women’s game, not only for pay even, but just equality in terms of treatment, in terms of facilities, in terms of resources within the club.

“And ... I’m always looking to make those better, and especially here at Tottenham. I know that this is only their second year in the WSL so it’s been a little bit of a transition, I think, for them from the second division to the first. But they’re looking to get better both on the field and off the field and I hope I can help."

She is also helping to pass on tactical advice to her new teammates at Tottenham, going through video analysis of matches and trying to instill what she calls the “U.S. mentality” -- one that has seen her win two World Cups.

“You give 100% every single day, you show up and you get your work done,” she said. “If you’re showing up and you don’t feel like training and you feel a little under the weather, this or that, it doesn’t matter. You have to hold yourself accountable because your teammates are counting on you.”

This isn’t a path to a career taking charge of players, though.

“I love it right now being able to help and encourage my teammates,” she said. “But that’s as far as it’ll go with the coaching, I don’t have the hunger for it like I do for playing.”

Morgan just isn’t sure yet how long, once she starts playing for Tottenham, she will be part of the north London team. She could stay until the end of the season in May or leave in December and return to the Orlando Pride. Regular calls are taking place to determine the National Women’s Soccer League’s pandemic-disrupted plans for 2021 when Morgan’s priority is game time ahead of the delayed Tokyo Olympics.

She would also like to fly home for Christmas so Charlie can be introduced to her extended family — before she starts sounding like a Londoner.

“I’ve kind of snatched her away and took her to England with me,” Morgan said. “I’ve got her some new toys and stuff that sing and they’re all with the English accent. So, I’m afraid her first word might be like ‘Mummy.’”

There’s Kona and Blue for Charlie to meet, too. And Morgan is also hoping to encourage more people to rescue dogs and cats over the age of seven.

She is working with pet food firm Stella & Chewy’s to promote a campaign that will see costs of adoption fees from a shelter in the U.S. or Canada in November.

“The natural gravitation for someone is to adopt a puppy,” she said. “As much as I feel like I rescued Blue and Kona, I feel like they rescued me because they unconditionally love you.”