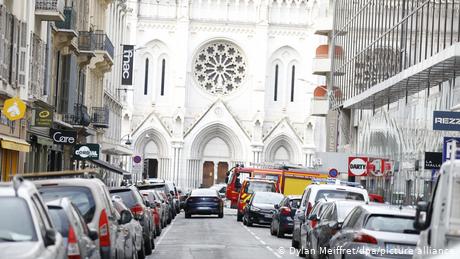 French police on Thursday morning said three people had been killed in a knife attack in the city of Nice, with several others injured.

Nice Mayor Christian Estrosi said the suspect behind the attack had been arrested. Estrosi said it appeared that the incident had been a terrorist attack on the city's Basilica of Notre-Dame.

"I ask the people of Nice to avoid the area to let the police and the emergency services work," wrote Estrosi.

Speaking to reporters, the mayor said the man suspected of carrying out the attack had been shouting "Allahu Akbar" (God is great) after his arrest. He added that French President Emmanuel Macron would be arriving in the city.

The individual, who was shot and injured by police, left "no doubt... about the meaning of his action," Estrosi said. He added that the victims had been killed "in a horrible way."

French broadcaster Europe 1 reported that a man had attacked several people and that the fatalities included a woman who had been decapitated.


Two of the victims are believed to have died in the church while another escaped but later succumbed to injuries they had sustained.

French Interior Minister Gerald Darmanin said a police operation was underway and that he would be chairing a crisis meeting. France's anti-terrorism prosecutor's department said it was investigating the attack.

It is believed that the attacker was acting alone and police are not thought to be searching for other assailants in Nice.

In Paris, lawmakers in the National Assembly observed a minute's silence in solidarity with the victims. The mayor of Paris, Anne Hidalgo, said the people of Nice "can count on the support of the city of Paris and of Parisians."

Also on Thursday, in the city of Avignon, police said they shot a second person dead after he threatened passers-by with a weapon, also shouting "Allahu Akbar." Meanwhile, a man in the Saudi Arabian city of Jiddah reportedly stabbed and wounded a guard at the French Consulate.

Read more: The French battle for freedom of speech: 'It's all about the principle'

The Nice incident took place less than a kilometer (just over half a mile) from the site where an attacker in 2016 plowed a truck into a Bastille Day crowd, killing dozens.

The attack comes with the country still reeling from the beheading of a middle school teacher, Samuel Paty, earlier this month in Paris by a man of Chechen origin.

The attacker had said he wanted to punish Paty for showing pupils cartoons of the Prophet Mohammad in a civics lesson. It was not immediately clear if Thursday's attack was connected to the cartoons, which some Muslims consider to be blasphemous.