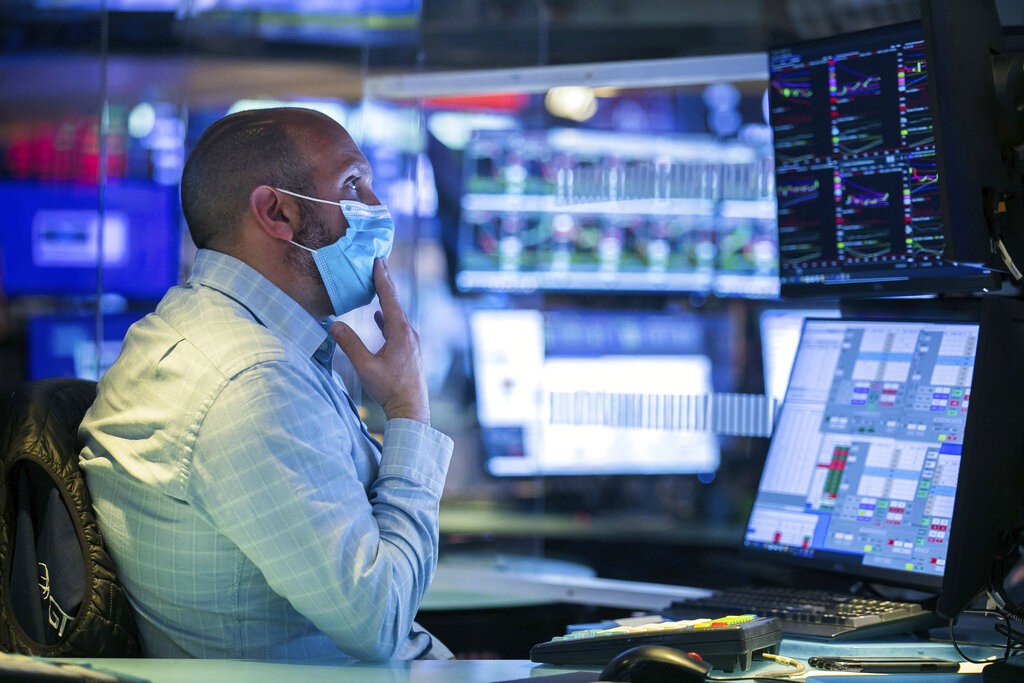 The S&P 500 slid 3.5%, its third straight loss and its biggest drop since June. The benchmark index is already down 5.6% this week, on track for its biggest weekly decline since March. That's when the market was in the midst of selling off as strict lockdowns around the world choked the economy into recession.

The selling in U.S. markets followed broad declines in Europe, where the French president announced tough measures to slow the virus’ spread and German officials agreed to impose a four-week partial lockdown. The measures may not be as stringent as the shutdown orders that swept the world early this year, but the worry is they could still hit the already weakened global economy.

In the U.S., cases are increasing in just about every state and the number of deaths and hospitalizations due to COVID-19 are on the rise. Even if the most restrictive lockdowns don’t return, investors worry that the worsening pandemic could scare away customers of businesses regardless and sap their profits. The U.S. economy could lose momentum just as prospects for more economic support from Washington have dwindled as Election Day nears.

“Many people had come to believe we were at least stable, and now we’re having a second uptick, which throws potential GDP and everything else up in the air,” said Randy Frederick, vice president of trading and derivatives at Charles Schwab. ”I did not expect this level of volatility or this degree of a sell-off.”

Crude oil tumbled on worries that an economy already weakened by the virus would consume even less energy and allow excess supplies to build higher. Benchmark U.S. crude dropped 5.7% to $37.39 per barrel. Brent crude, the international standard, fell 5.4% to $39.12 per barrel.

A measure of fear in the stock market touched its highest level since June, when the market suddenly tumbled amid concerns that a “second wave” of coronavirus infections had arrived. The VIX measures how much volatility investors expect from the S&P 500, and it climbed 20.8% Wednesday.

Even the continued parade of better-than-expected reports on corporate profits for the summer failed to shift the momentum.

Microsoft, the second-biggest company in the S&P 500, reported stronger profit and revenue for its latest quarter than expected. That’s typically good for a stock, but Microsoft nevertheless slumped 5%. It gave a forecast for the current quarter that was relatively in line with Wall Street forecasts, but analysts noted some caveats in it.

UPS fell 8.8% after also reporting better-than-expected earnings, though it said the outlook for its business is too cloudy due to the pandemic to offer any forecasts for its revenue or profits in the current quarter.

Companies broadly have not been getting as big a pop in their stock prices as they typically do after reporting healthier-than-expected profits. Analysts say that suggests good news on profits has already been built into stock prices and that the market’s focus is elsewhere.

Investors' hopes that Congress and the White House could soon offer more big support for the economy as it struggles through the pandemic have largely faded. House Speaker Nancy Pelosi and Treasury Secretary Steven Mnuchin have continued their talks, but investors see little chance of a deal happening before Election Day next week.

Economists say the economy likely needs such aid after the expiration of the last round of supplemental unemployment benefits and other stimulus approved by Washington earlier this year.

Uncertainty about the upcoming presidential election has also been pushing markets around.

The race seems be getting tighter than it was just a few weeks ago, said Jamie Cox, managing partner for Harris Financial Group. “It has markets somewhat unnerved that the prospects of a contested election are back in the mix,” he said.

Cox said he expects more calm in the markets in November after the election passes and some of the uncertainty over a new aid package fades.

“Aid is coming regardless. There’ll be no political motivation to hold it back after the election,” he said. “There’s plenty of desire to get money out to people so I think it will happen one way or another in November.”