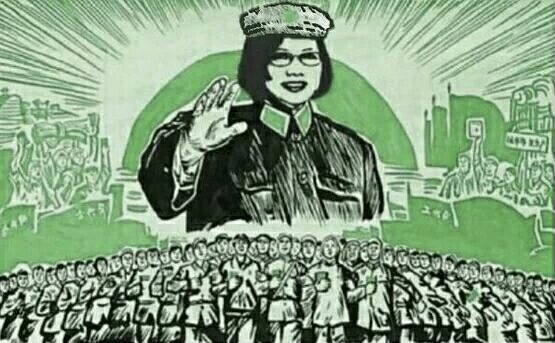 On Oct. 26, the National Communications Commission's (NCC's) held a session to review Chung T'ien Television's (CTiTV's) broadcast license, which expires on Dec. 10. CTiTV is part of the Want Want China Times Group, which has repeatedly come into conflict with the authorities due to its pro-China stance and over the past six years has been fined for 21 violations ranging from spreading disinformation to biased reporting.

The KMT complained that the review was unprecedented, calling it an attempt by the ruling Democratic Progressive Party (DPP) to suppress news coverage that is critical of the party. KMT Chairman Johnny Chiang (江啟臣) called on the government to uphold freedoms of the press and speech, asking whether there is "a future for Taiwan's democracy" if "the media that monitors the government" is shut down, reported UDN.

On its Twitter feed, the KMT then uploaded a Chinese propaganda poster that had originally shown Mao waving over masses of Red Guards holding his infamous "Little Red Book." In the KMT version, Mao's head has been replaced with that of a smiling Tsai.

In the caption, the KMT wrote that Taiwan's people deserve a "non-partisan, independent, and professional" NCC. The KMT claimed that it stands for freedom of speech and asked Tsai: "Where do you stand?"

Taiwanese and foreign netizens responded by criticizing the KMT for going too far:

"An official account actually posted this kind of image?'

"It seems that the KMT still doesn't know how it lost in January this year."

"Does the KMT think it is not polling low enough? This really is continuous self-harm."

"Comparing Tsai Ing-wen to Mao Zedong? Seriously!? You guys are sick. Shame on the Kuomintang."

"No one trusts you. Your depiction of Tsai Ing-wen is disgraceful and disrespectful of history."

"Freedom of speech doesn’t include the right of faking the news. That is quite a simple concept but of course KMT couldn’t understand. Yes, we deserve a non-partisan, independent, and professional NCC. And we got it."