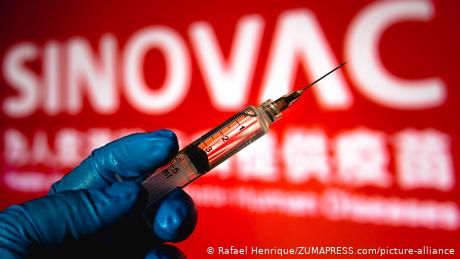 China has the pandemic under control. But is that also true of the collateral damage it has suffered on the international stage? Beijing faced massive international criticism for its nontransparent conduct at the beginning of the coronavirus crisis.

In its bid to ward off the accusations, it resorted to the full range of its propaganda tools, smashing a lot of diplomatic china on the way. US President Donald Trump also did his best in this regard, among other things by coining the term "China virus."

Beijing wasn't content with a mere tit-for-tat response to Trump. Chinese diplomats used all available platforms, including Twitter and Facebook, both banned in China, to defend the Communist Party's course.

"Sweden, Britain, the Netherlands and France, for instance, noted aggressive statements on how the pandemic was being dealt with outside of China, some of which were also perceived as racist — including accusations about inefficient health care systems or cynical behavior by foreign politicians in the face of countless deaths," wrote Heike Holbig of the Hamburg-based GIGA Institute for Asian Studies in an essay entitled "From a Crisis of Health to One of Diplomacy: China’s COVID-19 Response."

A 'community of a common destiny'

What international media called "wolf warrior diplomacy" was only a phase in China's political communication that waned at the end of May. China's leadership alternated flexibly between defense and attack modes, but also signaled a willingness to cooperate, such as at a virtual G20 summit at the end of March.

At the summit, Chinese leader Xi Jinping described the fight against the pandemic as being guided by the concept of a "community of a common destiny of humanity." This grandiose concept has, in fact, been part of the CCP's party statutes and the Chinese constitution for several years now.

One area where it has been put into practice is in the cooperation on developing vaccines. The German pharmaceutical company Merck, for instance, says it is involved in more than 50 projects for vaccines "that are working extremely well in global networks. Americans, Chinese, Europeans, Japanese and others work together," wrote the Frankfurter Allgemeine Zeitung.

Apart from the fight against the virus, however, relations between China and the West remain tense, and they have even worsened in the pandemic. The tension is more or less inherent in Sino-American relations — the two powers are usually referred to as global rivals — but this aspect is not quite as evident in relations with the EU. However, the virtual China-EU summit held under the German EU presidency, high-level talks between the EU and China that began in June, and Foreign Minister Wang Yi's European trip at the end of August/beginning of September allowed the differences to become very apparent.

In particular, Berlin and the EU criticize the new national security law for Hong Kong that gives Beijing comprehensive powers to suppress dissidents. The Chinese side rejects the criticism as interference in internal affairs.

Beijing glossed over the differences for its domestic audience and simply did not mention any criticism. "The Chinese side also failed to emphasize fundamental differences in values and systems," wrote Heike Holbig.

Instead, according to Holbig, the Chinese Foreign Ministry stated that the EU continued to regard China as a partner and not an opponent, and that there were no fundamental conflicts of interest. "Chinese readers were also told that the EU wanted to hold on to multilateralism and expand multilateral cooperation with China, in particular in the areas of health, climate change, sustainable development and cooperation with Africa," she wrote.

These "targeted reinterpretations," Holbig said, indicate that Beijing sees the EU and other powers, though not the US, as "temporarily misguided, but not (yet) fundamentally opposed" states that "need a strict but benevolent approach" to be won over for China's cause.

China's goal of achieving "carbon dioxide neutrality" by 2060, announced by Xi Jinping in a video message to the UN General Assembly at the end of September, could be a way to win them over. Almost overnight, the pledge turned the main emitter of carbon dioxide worldwide into a global trailblazer of climate protection.

It is not clear how China intends to achieve the goal, but people want to take Xi at his word: Hopes of getting China on board with international climate policies are too great. "The lack of an obvious road-map makes Mr. Xi's commitment all the more remarkable," according to Britain's Economist. "His ambitions will require a new approach to economic development that will need to become obvious soon."

It is being hoped that the new Chinese five-year plan, which was scheduled to be discussed beginning on October 26 at the 5th plenary session of the party congress in Beijing and to be presented early next year, will shed a light on such an approach.

The short-term focus, however, is on coping with the economic consequences of the coronavirus pandemic. Here, too, people are looking to China with hope. The country is the only one that emerged from the temporary downturn and recovered in what is known as a V-shape. The 4.9% growth in the third quarter was almost back to the pre-coronavirus level recorded in the same period last year.

"China is the only major economy in the world to emerge from the coronavirus crisis relatively unscathed," Jörg Zeuner, chief economist at Union Investment, is quoted as saying in the Frankfurter Allgemeine Zeitung daily. The International Monetary Fund (IMF) believes that China will make up the lion's share of a predicted global economic growth of 0.6% for 2021.

Read more: Are German carmakers too dependent on China?

Economic dependencies are mutual, however, and China, too, depends on trade and foreign investment. The country aims to diversify in these areas by expanding relations with Asian and European trading partners and becoming more independent of the US.

With this in mind, perhaps there is still a chance for the EU to conclude an investment protection agreement with Beijing designed to guarantee fair competitive conditions between Chinese and European companies.

The fact that it is highly unlikely to be concluded this year is more serious than China's behavior in the pandemic, said Mikko Huotari, head of the Berlin-based Mercator Institute for China Studies (Merics). The latter only reinforced a general pessimistic trend in the view of China, but did not trigger that perception, he argued.

Huotari has not completely ruled out the chance of an investment agreement being concluded before the end of Merkel's chancellorship, however. In a Merics podcast series entitled "ChinaPower," he said that would show you can reach negotiated solutions with China, which is something "no one would probably claim possible at the moment."

If it were to happen, memories of the accusations at the start of the pandemic and debates about mask deliveries that seemed generous but were actually self-serving would be completely eclipsed. They have already been muted by China's obvious success.

This article has been translated from German by Dagmar Breitenbach.