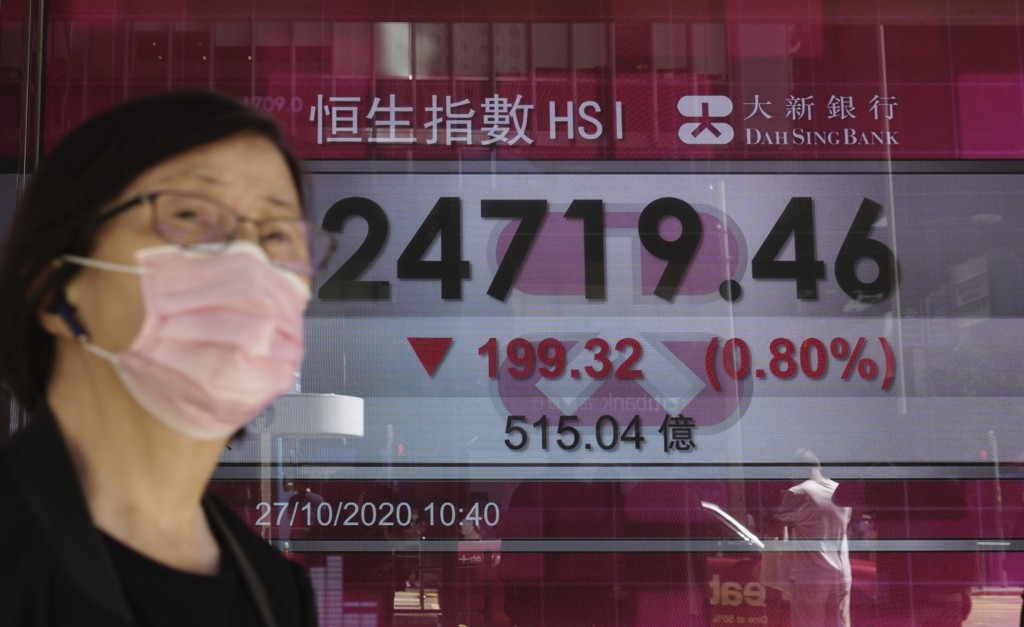 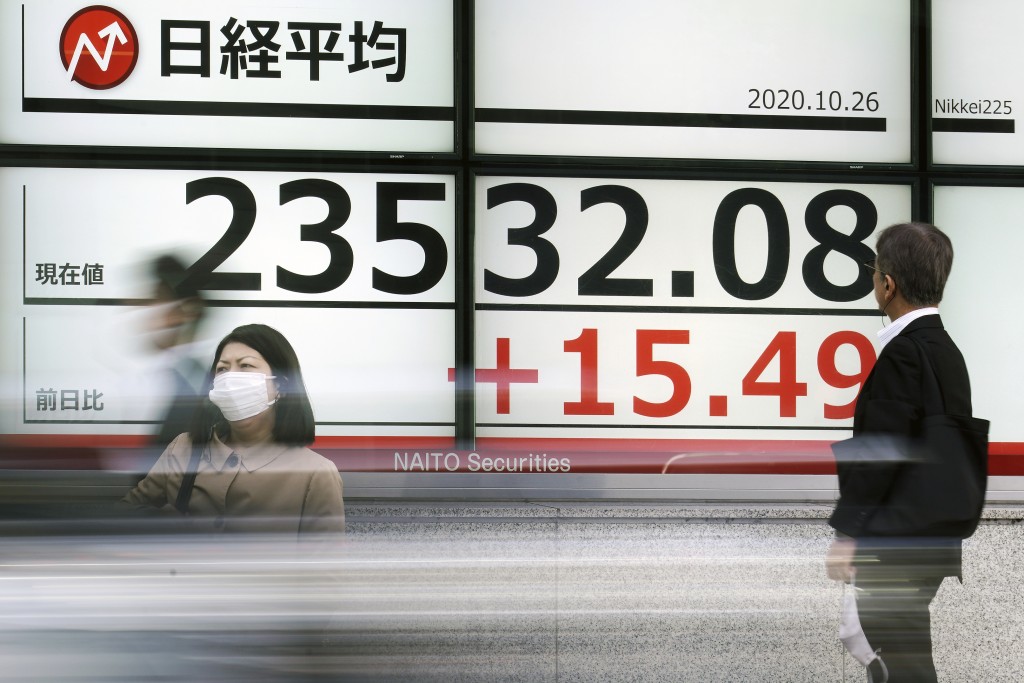 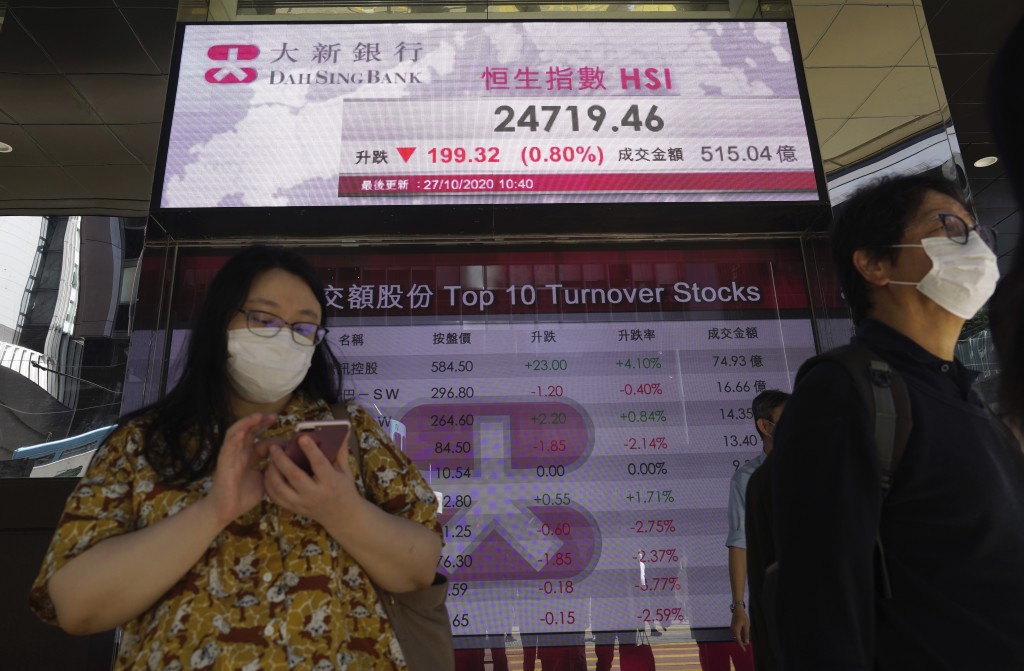 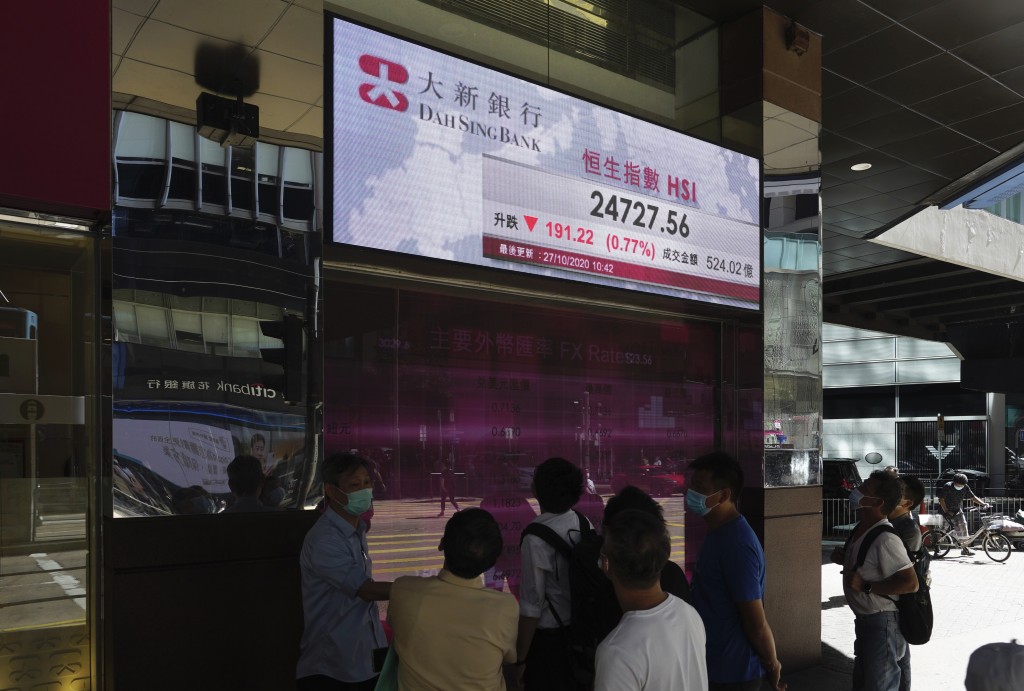 Shares skidded in Asia on Tuesday after surging coronavirus cases and waning hopes for U.S. economic stimulus gave Wall Street its worst day in a month.

Overnight, the S&P 500 fell 1.9%, deepening its losses from last week. Stocks of companies worst hit by the pandemic logged some of the biggest losses. Cruise lines, airlines and energy stocks tumbled in tandem with crude oil prices.

In another sign of caution, Treasury yields pulled back after touching their highest level since June last week and were steady at 0.80% on Tuesday.

South Korea reported better than expected 1.9% quarter-on-quarter economic growth in the last quarter, following a 3.2% quarterly decline in April-June. On an annual basis, the economy contracted 1.3%, compared with expectations for a 1.8% decline according to FactSet. Strong exports led the rebound, economists said.

But unease over possible disruptions due to a resurgence of COVID-19 outbreaks has added to uncertainties, with the U.S. presidential vote just one week away.

Doubts are mounting that Washington will come through with more stimulus for the economy before the Nov. 3 Election Day after House Speaker Nancy Pelosi and Treasury Secretary Steven Mnuchin failed to reach an agreement in a phone call Monday, according to a Pelosi aide. The two have been discussing a potential deal to send cash to most Americans, restart supplemental benefits for laid-off workers and provide aid to schools, among other things.

Any compromise reached between House Democrats and the White House faces stiff resistance from Republicans in control of the Senate. Another concern is that possible delays in sorting out the results of next week’s elections could end up pushing a stimulus deal back indefinitely.

Coronavirus counts are surging in much of the United States and Europe, raising concerns about more damage to still-weakened economies. In Europe, Spain’s government has declared a national state of emergency that includes an overnight curfew, while Italy ordered restaurants and bars to close each day by 6 p.m. and shut down gyms, pools and movie theaters.

“While we are seeing nations attempt to stifle the spread of the virus through more localized and tentative restrictions, it seems highly likely that we will eventually see a swathe of nationwide lockdowns if the trajectory cannot be reversed,” said Joshua Mahony, senior market analyst at IG in London.

The U.S. economy has recovered a bit since stay-at-home restrictions that swept the country earlier this year eased. Economists expect a report on Thursday to show it grew at an annual rate of 30.2% during the summer quarter after shrinking 31.4% during the second quarter.

But momentum has slowed after a round of supplemental unemployment benefits and other stimulus that Congress approved earlier this year expired.

Stocks of companies that need the virus to abate and the economy to return to normal logged some of the sharpest losses Monday.

Energy stocks dropped to the largest loss among the 11 sectors that make up the S&P 500, falling in concert with oil prices. All told, about 92% of the stocks in the S&P 500 closed lower.

On Tuesday, oil prices steadied, with U.S. benchmark crude gaining 29 cents to $38.85 per barrel in electronic trading on the New York Mercantile Exchange. It skidded $1.29 to $38.56 on Monday. Brent crude, the international standard, picked up 32 cents to $41.13 per barrel.

This week is the busiest of this quarter's earnings season, with more than a third of the companies in the S&P 500 index scheduled to report. Besides Amazon and Apple, Ford Motor, General Electric and Google's parent company, Alphabet, are also on the docket.

Across the S&P 500, profit reports for the summer have been mostly better than Wall Street had feared, though they’re still on pace to be more than 16% lower than year-ago levels. Still, by Friday, 84% of S&P 500 companies had reported better results than analysts had forecast, according to FactSet. If that level holds, it would be the best since at least 2008, when FactSet’s records began.