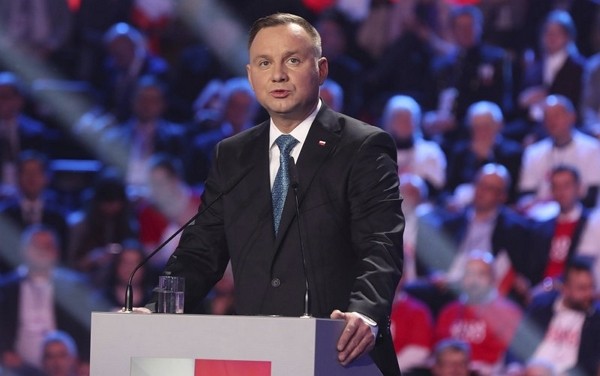 The president of Poland, Andrzej Duda, has tested positive for the coronavirus but is "feeling well." Poland reported it's highest daily new infections as new measures come into force to slow the spread of the virus.

Polish President Andrzej Duda tested positive for coronavirus, as the country faces a surge in new infections in October. His infection was announced by the presidential minister, Blazej Spychalski, who said Duda, an ally of the ruling nationalist Law and Justice Party, was "feeling fine" at the time of the diagnosis. The day before officials announced his infection, the number of new cases in the country of 38 million hit a daily record of more than 13,600.

The 48-year-old conservative leader was tested on Friday (Oct. 23). There was no immediate word on how the diagnosis would affect government operations.

While it was initially unclear when Duda was infected, he had attended an investment forum in the Estonian capital, Tallinn, on Monday, where he met with Bulgarian President Rumen Radev, who went into quarantine after being directly exposed to the virus.

"The president is a young man, I think that he will get past the infection without problems," Deputy Health Minister Waldemar Kraska told private radio station RMF. He added that he expects that all people who had contact with Duda in recent days will be quarantined.

The announcement comes as Poland faces a spike in new infections, with cases hitting a daily record of more than 13,600 on Friday.

Poland went into a "red zone" lockdown on Saturday, resulting in a two-week partial closure of primary schools and restaurants. During the lockdown, restaurants will only be able to serve takeaway meals, while fitness clubs and pools will also be closed.

The government also sent text messages to Poles, calling on them to stay home and help elderly people.

Under the new measures, gatherings are limited to five people, with weddings banned and new restrictions placed on the numbers of people allowed to enter shops, take public transport, and attend religious services. The country has seen large protests following a ruling that limits abortions.

The ruling nationalist party has faced criticism in recent days from the opposition that the country is not prepared enough for the second coronavirus wave.

Recent opinion polls have also shown a drop in support for both the governing Law and Justice party and Duda. Poland, a country of 38 million people, has reported over 228,000 cases and a death toll of 4,172.