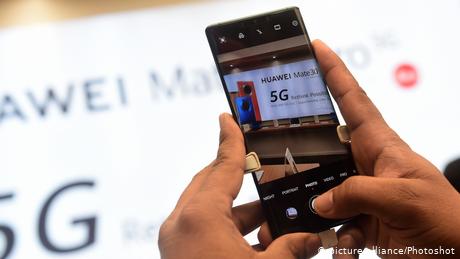 North Macedonia, Kosovo and Bulgaria signed an agreement with the US this Friday on high-speed broadband network security.

The "Clean Network" initiative aims to eliminate "long-term threats to data privacy, security and human rights posed to the free world from authoritarian malign actors, such as the Chinese Communist Party," according the US Department of State.

The US has become increasingly concerned about the dominance of Chinese companies in constructing 5G internet networks.

The Trump administration has heavily restricted Chinese telecoms company Huawei's actions in the US and urged allies to do the same.

It claims the tech giant is a back door for Chinese intelligence services to conduct espionage operations via critical infrastructure, which Huawei denies.

Read more: 5G in Africa set to bring green benefits — but not everywhere

The US embassy in Bulgarian capital Sofia tweeted that the signing was "historic," adding Bulgaria was joining a "growing coalition of countries and companies committed to protecting their 5G networks from untrusted vendors."

Bulgarian Prime Minister Boyko Borissov said the European Union has already provided guidelines on 5G network security and that they should be built on fair competition and transparency.

North Macedonia Prime Minister Zoran Zaev tweeted that the agreement was "vital" for the future prosperity of the country.

The signings took place as top officials from the US and the EU on Friday launched a bilateral dialogue on China.

The EU High Representative for Foreign Affairs Josep Borrell and US Secretary of State Mike Pompeo "welcomed the start of this dialogue as a dedicated forum for EU and US experts to discuss the full range of issues related to China," a statement said.

Read more:Opinion: Europe will not follow the US 'China-free' 5G strategy

The bilateral talks will discuss "themes including human rights, security, and multilateralism."

The next meeting is set for mid-November.