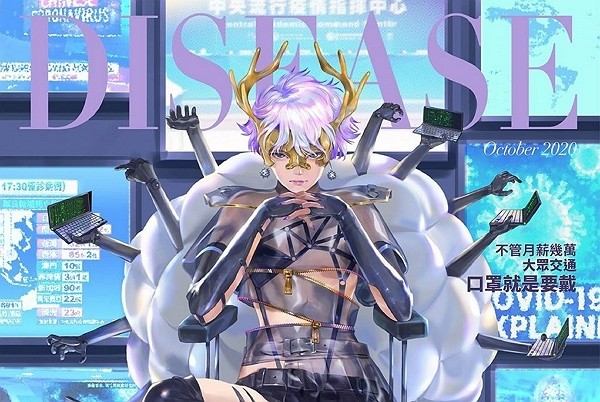 A series of illustrations commissioned by Taiwan's Centers for Disease Control (CDC) showing various diseases as anime characters has caught on in the United States after being uploaded on the meme sharing platform 9GAG.

The series, which was launched in 2018 to build public health awareness among people under 35, has rolled out illustrations of26 diseases to date, the most recent of which, released last week, was COVID-19.

Each re-imagined illness appears as the cover model on the magazine "Disease," with their appearance, outfit, accessories, and even the background art representing aspects of the disease pathology, while the cover blurbs offer tips on how to stay healthy.

After capturing the interest of Japanese netizens last year, the illustrations caught on in the U.S. this week after a user uploaded them to 9GAG, which shared them on its Facebook page under the caption "Why are they so attractive?"

The main answer to that question, according to Chiyou (蚩尤), the New Taipei-based artist behind the COVID-19, ebolavirus and plague illustrations, is that taking diseases out of "the textbooks" and giving them a human form makes them more approachable and easier to understand.

In the case of COVID-19, which he said had been the hardest to create, Chiyou associated the disease's "mysterious and unpredictable" nature with a computer hacker: "always changing, possessing many faces, and able to spread from country to country the moment people let their guard down."

The structure of the virus also informed the illustration, he said, noting how its spherical shape is represented in the model's chair, while the spike proteins on the virus' surface appear as outward-reaching metal arms.

Say HANa (林花), who spent a month creating both syphilis and rubella illustrations, said the greatest challenge for her had been reconciling the diseases' sometimes gruesome symptoms with their "cute" personifications.

As an example, she explained her inspiration for the illustration of syphilis -- a sexually transmitted disease that takes its name from a mythical shepherd.

Based on this origin story, Say HANa said, she decided to represent syphilis as a shepherdess while including a veiled image of a sexual organ on her corset and depicting the disease's characteristic rash in the red ornaments on her clothing.

Reacting to its sudden popularity in a Facebook post on Friday night, the CDC thanked people for their interest and announced that it is planning to feature the illustrations in a 2021 desk calendar.

Despite foreseeable criticism that the pictures make light of deadly diseases, it is undeniable that people are enjoying the campaign, and maybe even learning something in the process.