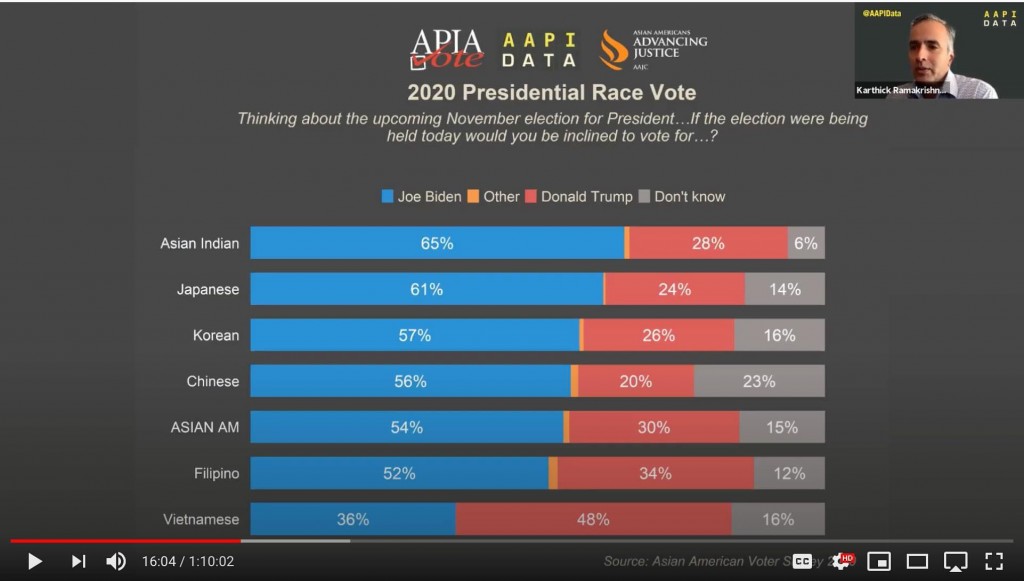 TAIPEI (Taiwan News) — A recent survey shows that all Asian American groups polled plan to vote for Joe Biden, with the exception of Vietnamese Americans, who favor Trump.

The "2020 Asian Voter Survey (AAVS)," carried out by AAPI Data and based on telephone interviews conducted online from July 15 to Sept. 10 on 1,569 registered voters who identify as Asian American. The groups included in the survey included Asian Americans, Asian Indians, Chinese, Filipinos, Japanese, Koreans, and Vietnamese.

Understanding where these groups stand on the candidates is important, as Asian Americans are the fastest-growing ethnic group in the U.S., and in some competitive states, such as Arizona, Pennsylvania, and North Carolina, they form a critical mass. They are also expected to play a role in the congressional races in Texas, New Jersey, and Californa, a state where they account for 10 percent of registered voters.

When asked the question "If the election were being held today would you be inclined to vote for…?" 56 percent of Chinese Americans chose Joe Biden, 20 percent picked Donald Trump, 23 percent selected "Don't know," and 1 percent opted for "some other candidate." The majority of Asian Indians (65 percent), Filipinos (52 percent), Japanese (61 percent), Koreans (57 percent), and Asian Americans overall (54 percent) also chose Biden.

The exception was Vietnamese Americans. Only 36 percent backed Biden and 48 percent chose Trump, with 0 percent selecting "some other candidate" and 16 percent opting for "Don't know." The same pattern held true when it came to the House and Senate races, with all groups but Vietnamese Americans supporting Democratic candidates.

Nearly half of those surveyed, 48 percent, expressed concern about election interference, while almost half said they worry about the safety of voting in person amid the Wuhan coronavirus (COVID-19) pandemic. As a result of coronavirus fears, 54 percent stated they prefer to vote by mail or absentee ballot, as opposed to 26 percent who will vote in person on Nov. 3.