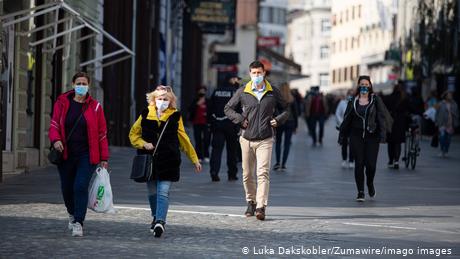 Skofja Loka is a small town with almost 12,000 inhabitants to the northwest of the capital, Ljubljana. According to official statistics, 348 people in the municipality have been infected with COVID-19 since the start of the pandemic.

At the local center for the blind, the visually impaired and the elderly, more than 30 residents have been infected. The center is severely short-staffed, with 10 of its workers infected with the virus.

As hospitals across the country approach full capacity, the center in Skofja Loka decided, in collaboration with the Ministry of Labor, Family, Social Affairs and Equal Opportunities, to set up a so-called "red zone" for infected residents in a nearby primary school gym.

Here, beneath the basketball hoops, staff erected movable partition walls and set up beds in preparation for the arrival of 45 residents.

"It's actually a suitable space, but they don't heat the primary school at night, so we had to get extra blankets for the residents on the first night. We solved the problem first thing the next morning," says Silva Kosnjek, director of the center, speaking to public broadcaster RTV Slovenia.

Some relatives, however, were not happy about their infected relatives being moved to the gym. "We asked relatives to understand the move. Otherwise it would be better for their parents to be at home. We don't know what the alternative would be," Kosnjek said.

The number of new coronavirus cases in Slovenia has more than doubled in one week. On Tuesday, October 13, the public was shocked to learn that 707 new cases had been recorded the previous day. A week later, on October 20, 1,503 new cases were recorded and 5,891 tests conducted. Some 313 people needed hospital care; 55 were in intensive care. Within the space of a week, 29 people had died.

Epidemic for the second time

On October 19, the Slovenian government declared an epidemic for the second time this year, this time for 30 days. It also imposed a curfew from 9 p.m. to 6 a.m. The 14-day incidence rate per 100,000 population for Slovenia has risen to 423, which puts the country in fifth place in the European Union. Since the beginning of the pandemic, 202 people in the country have died of COVID-19.

Not everyone agreed with the order, and at 9 p.m. on the first evening of the curfew, a small group of about 50 protesters took to the square in Maribor, Slovenia's second city, to vent their anger. Prime Minister Janez Jansa from the biggest coalition party SDS was characteristically direct in his Twitter response: "Get serious!"

At present, all statistical regions except "Obalna" (the Adriatic Seaside at the town of Koper) are in a "red area" which means that all pubs, bars and restaurants are closed, except those that deliver food and drink.

Read more: COVID-19 vaccine update: Who are the front-runners?

Gyms are also closed and sports activities are prohibited for all but professional athletes. With a few exceptions, people are not allowed to cross from one statistical region into another except to travel to work, to seek emergency medical care and a few other exceptions. The same rules apply for travel across national borders.

All religious ceremonies, weddings and events have been prohibited. Public transport is still running, shops and shopping malls remain open. Masks are mandatory both indoors and in public spaces across the country. Gatherings of a maximum of six people are permitted with exceptions for those living in the same household.

The government is encouraging people to work from home. Most schoolchildren are attending school from home, with the exception of those in primary schools up to fifth grade.

The coronavirus pandemic has shone a harsh light on the state of the Slovenian health care system, which has been in poor condition for many years. "In Slovenia too, we will have to do something about health care infrastructure," Dr. Vojko Flis, general director of the University Medical Center Maribor, told Radio Slovenia.

"All our hospitals are in relatively old buildings. At the same time, we don't have buildings that are suitable for accommodating patients who could spread serious infectious diseases." Flis went on to say that the situation should be addressed between pandemics, adding that "whether we actually do something is, of course, another story."

As elsewhere in Europe, there are daily stories of overburdened Slovenian health care workers in the media. According to the Slovenian nongovernmental statistical project "Covid Follower" there were 8,860 active cases in Slovenia as of October 20, 5 to 10% of which are thought to be health care workers. According to Dr. Flis, employees are suffering from the mental strain even more than from physical fatigue.