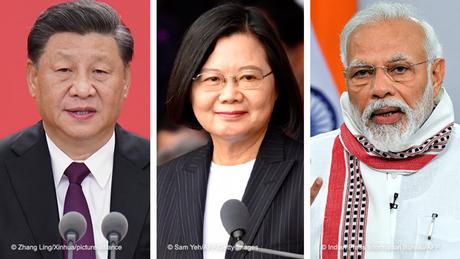 When the Chinese embassy in New Delhi sent an advisory to journalists in India earlier this month, it could not have anticipated the move to backfire so spectacularly. An event that would have otherwise gone underreported by most newsrooms, and largely unnoticed by the general public, made headlines in major news outlets and became a top trend on social media.

It all started with the Chinese embassy issuing a note to journalists in India, asking them not to violate the "one China policy" while reporting on the Taiwan National Day.

The "guidelines" to the Indian press sparked outrage among journalists and social media users. The following day, India's Foreign Ministry said that India has "a free media that reports on issues as they see fit."

Taiwan's Foreign Minister Joseph Wu also responded to the Chinese statement in a rather undiplomatic manner.

On Taiwan National Day, celebrated on October 10, thousands of Indian users posted wishes for the people of Taiwan.

Among them were politicians from India's ruling Bharatiya Janata Party (BJP). Tajindra Singh Bagga, a spokesperson for the party's Delhi unit, went a step further and put up posters outside the Chinese embassy with the message: Taiwan, Happy National Day.

India, like most other nations, does not have formal diplomatic ties with Taiwan. But relations between the two Asian democracies have significantly improved since the mid-1990s when the two sides established informal ties.

Namrata Hasija, an expert on cross-strait ties, believes that the relationship between India and Taiwan has not progressed as it should have, because of Beijing.

"In 1995, India's then-prime minister PV Narsimha Rao had said that our relationship with Taiwan should never affect our ties with mainland China," said Hasija, a research fellow at the Centre for China Analysis and Strategy in New Delhi."Since the very beginning, China's shadow has loomed large over India-Taiwan relations," she told DW.

Experts in Taipei also agree that China plays an outsized role in the bilateral ties between the two democracies.

"Unless India withstands Beijing's pressure and disregards Chinese concern over its external relation with Taiwan, the bilateral ties may not be able to take off," Professor Fu-Kuo Liu, director of Taiwan Center for Security Studies in Taipei's National Chengchi University, told DW.

Several Indian commentators have argued that New Delhi should not be "overly deferential to Beijing" or pay heed to Chinese objections.

Read more: Taiwan: The threat that the world ignores

But Hasija, despite being an ardent advocate of closer ties between India and Taiwan, admits that recognizing Taiwan as a country is not a realistic possibility.

Neither can India afford to engage with Taiwan the way the United States has; formally recognizing the one China policy while maintaining deep political and military ties.

"Establishing full diplomatic relations is not going to work for India, but a strategic partnership between the two is quite possible," Hasija said.

"India will have to slowly build a stronger partnership. India is not in the same position as the US, economically or militarily," she said. "Also, China is India's immediate neighbor," she added, referring to a potential fallout on the hotly contested borders.

Over the past decade, a potential point of convergence emerged in the two countries' foreign policy outlook: India's "Act East Policy," which seeks to advance ties with Indo-Pacific countries, and Taiwan's "New Southbound Policy," an effort to wean off Chinese markets.

But according to Lui, these two policy initiatives have not been jointly pursued by the two sides so far, and thus failed to boost cooperation.

"They have to be explored together and analyzed jointly so that common goals may emerge," he told DW.

New Delhi, however, has been cautious in going beyond educational and cultural ties with Taipei. India and Taiwan signed a bilateral investment agreement in 2018, and recently there were media reports that both sides were considering going forward with talks on a trade deal, drawing a rebuke from Beijing.

China this week asked India to approach ties with Taiwan "prudently and properly," insisting that Beijing would "firmly oppose" any official exchanges between New Delhi and Taipei.

Any Indian advance toward Taiwan is promptly met with sharp reactions from Beijing.

At the event held in May, the MPs congratulated the president on winning a second term and referred to the island as a "democratic country," in contravention to India's adherence to the one China policy.

Anti-Beijing sentiments have been simmering among the Indian public since the border clashes with China this summer, which left at least 20 Indian soldiers dead.

This has also led to a growing sense of solidarity with the pro-independence movements in Hong Kong and Taiwan.

As a result, the 109th Taiwan National Day this year saw an unprecedented level of support in India.
"I have never seen such widespread celebration of the Taiwan National Day among Indians," said Hasija, who has been tracking the region for nearly a decade. "People in India are also more aware of Taiwan now and see it as a separate country."

The outpouring of support and a wave of new social media followers from India prompted President Tsai to not only thank "dear friends in India," but also shared photos of her 2012 trip to the South Asian nation.

"We are grateful for the strong support we have seen from Indian friends," said Kolas Yotaka, spokesperson for Taiwan's presidential office.

"Taiwanese and Indian people should have had more interaction in the past," Yotaka told DW. "I believe going forward we will have more opportunities to strengthen and solidify this partnership," she said.
But the recent surge in support for Taiwan is underpinned by the growing animosity toward China. This is not lost on observers in Taipei.

"There is a general feeling in Taiwan that after each India-China border conflict, the Indian attitude toward Taiwan becomes warmer," Fu-Kuo Liu said. "Taiwan would expect a genuine desire for cooperation from India, as such a relationship would last longer."

Read more: How realistic is India's 'Made in China' boycott campaign?

In the aftermath of the border clashes, some commentators have made the case for India to use Taiwan as leverage against its Asian rival.

Namrata Hasija believes that such a strategy would be counterproductive. "India should not think of Taiwan as a card to be played just because tensions with China are running high," she said.

"While China will continue to be a factor, even with the Indian masses, India and Taiwan should continue making slow, yet steady progress," Hasija said. "It's about time that India stopped looking at Taiwan from a Chinese prism."