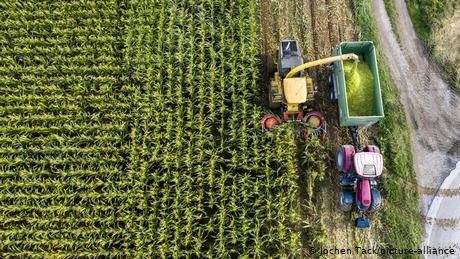 Better late than never. The EU has finally understood that agriculture and the environment are two sides of the same coin. The bloc has agreed to ensure that in future the common agricultural policy (CAP) takes the environment and climate change into account, in an attempt to lessen environmental damage. If the European Commission gets its say, member states themselves will be responsible for implementing strategies to achieve climate goals.

What is new and controversial are the eco-schemes that it has introduced so that farmers can receive additional subsidies if they partake in them.

The idea might sound good at first, but on closer inspection there seems to be a few inconsistencies. Most of the farming subsidies will continue to be allocated according to hectare. Business as usual then: The bigger a farm is, the more money it will get from Brussels.

Not only are larger factory farms, which damage the environment and contribute to the loss of biodiversity, at a greater advantage than small and medium-sized companies, so are larger countries, such as France, Germany and Spain.

It's known that every year farmers in the EU receive billions of euros worth of subsidies, which make up the largest share of the bloc's budget. Most of these subsidies come in the form of direct payments, which are handed out rather arbitrarily.

So long as this is the case and farms can continue receiving subsidies without having to adhere to stricter environmental regulations, there will be no real ecological reform of agricultural policy in the EU, even if Brussels says it wants to become greener.

Moreover, the new ecological regulations, which are not particularly strict, could well end up being voluntary. So far, the EU member states have agreed to 20% direct payments being earmarked for the environment. The parliament's compromise was 30%. Environmental groups say that at least 30% of direct payments should go towards fighting climate change, and this percentage should gradually be raised in order for there to be an impact.

Right now, the EU is still debating the issue anyway. It had to postpone a decision on the coming budget because of the coronavirus pandemic. And the agricultural reforms are only due to come into force in 2023, because of the resistance of certain member states to the new ecological regulations .

Biodiversity and sustainable food chains, which are key components of the Commission's Green Deal, are not even mentioned in the proposed agricultural reforms.

So, there will be no green agricultural revolution for now. The reforms may be a step in the right direction, but the bar really needs to be much higher if the environment is to be protected.