TAIPEI (Taiwan News) — President Tsai Ing-wen (蔡英文) on Tuesday (Oct. 20) shared a postcard she received from a Taiwanese scientist in Antarctica and expressed thanks for the greeting from afar.

Tsai revealed in an Instagram post that she had received a postcard from National Central University (NCU) Space Science and Engineering associate professor Lin Ying-Tsen (林映岑), who is conducting research for a year in Antarctica. The president said it took nearly two months for the postcard to arrive in Taiwan and that she looks forward to hearing about Lin's adventure upon her return.

The postcard, which was dated in August, features a drawing of a person standing bundled up in a snowy landscape. The words "winter," "summer," "evening wear," "menswear," and "ladies' fashion" can be seen at the bottom.

On the back of the postcard, Lin wrote that she feels privileged to have witnessed the beauty of Antarctica, including the polar night. She said she is aware of the destruction the pandemic has brought to the world as well as Taiwan's successful containment of the coronavirus.

Lin expressed gratitude to Tsai for her leadership in safeguarding Taiwanese. She also asked the president to continue supporting overseas researchers like herself.

Tsai pointed out that there are Taiwanese in every part of the world, including scientist Lin Ying-Tsong (林穎聰) who recently became the first person from Asia to descend into the Mariana Trench, the deepest point in the Pacific Ocean. Tsai also noted that the first-ever image of a black hole was captured by members of Taiwan's Academia Sinica, along with researchers from five other countries. 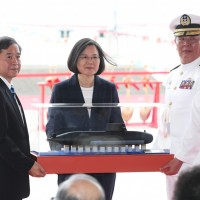