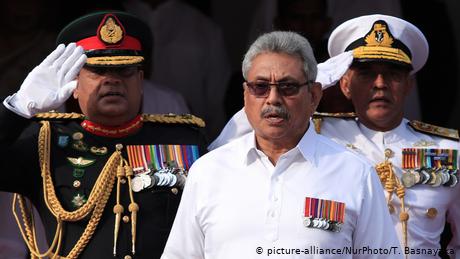 Sri Lanka's Parliament is gearing up for two days of heated debate starting Wednesday on the proposed constitutional amendment, called 20A, which would restore many executive powers stripped away from the president during the last legislature.

Critics say it's an attempt at centralizing power in the hands of President Gotabaya Rajapaksa and would lead to the president exercising extraordinary executive authority.

At the end of September, the nation's Supreme Court ruled in favor of the proposed amendment, saying that four clauses in the legislation require a referendum and the rest can be passed by the parliament with a two-thirds majority.

Opposition political parties, influential sections in Sri Lankan society, including Buddhist clergy, the Catholic Church and the National Christian Council of Sri Lanka, and even some from Rajapaksa's own party, have urged the government to withdraw the bill.

'Many ambiguities and uncertainties'

During his presidential campaign, Gotabaya Rajapaksa and Prime Minister Mahinda Rajapaksa, who is his brother, were critical of the "19th amendment" passed by the previous government that allowed independent commissions to appoint posts to key institutions.

These include the judiciary, public service and the elections commission. The amendment also paved the way for a right to information act, which provided for easy public access to information and has been widely used by journalists and civil rights groups.

The current administration is now seeking to overturn the 19th amendment, although it has said it wants to retain the right to information provisions.

Rajapaksa said amending the constitution would be one of Parliament's "first tasks," touching on plans to remove what the ruling Sri Lanka Peoples' Party (SLPP) has called "obstacles" in governing the country.

"Our constitution, which has been amended 19 times from its inception in 1978, has many ambiguities and uncertainties, presently resulting in confusion," Rajapaksa said.

His party returned 145 members to the 225-seat parliament in the August 5 election and has since secured the support of minor parties to obtain a two-thirds majority needed to pass constitutional amendments.

If the proposed 20A amendment is passed, it would allow people with dual citizenship to enter the legislature, allow the president to dissolve parliament after one year, and provide the president with more power in appointing judiciary members and other top officials.

It would also bar the auditor general from inspecting the offices of the president and the prime minister, among others.

The government has defended the proposed amendment, saying the powers are required to maintain a stable government.

But critics say it would lead to a weak cabinet and prime minister, while allowing the president to change ministers at will.

"The 20A kills the function of an independent audit" of the government's expenses, Eran Wickramaratne, a member of Parliament and former state finance minister, told DW.

"In effect, it will free hundreds of institutions from parliamentary oversight. A major check and balance on finance, performance and corruption is being eliminated by the amendment," he added.

A provision of the amendment allowing those holding dual citizenship to enter Parliament has also stoked controversy.

The opposition argues that the provision is a legal tool that would allow President Rajapaksa his get his brother Basil, who holds US citizenship, into the legislature.

The other two Rajapaksa brothers already dominate the leadership in both the party and government, sharing the defense and finance ministries between them. Their elder brother Chamal Rajapaksa holds the portfolio of internal security, which includes presiding over the police force.