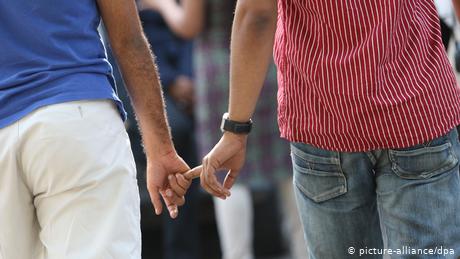 Ayesha (name changed), who identifies as bisexual, lives with her girlfriend in the southern Indian city of Bengaluru.

"My mother knows about my relationship, but my father doesn't," the 26-year-old told DW. "I hope same-sex marriage becomes a reality in India. Then I would have validation for my relationship. We wouldn't have to hide it or pretend to be roommates," she said.

After decriminalizing homosexuality in 2018, the legality of same-sex marriage is now being raised in Indian courts.

A public interest litigation (PIL) seeking to legalize same-sex marriage under the Hindu Marriage Act has been filed in the country's Supreme Court. The petitioners Gopi Shankar M., Abhijit Iyer-Mitra, G. Oorvasi, and Giti Thadani argue that there is no language in the act preventing same-sex marriage and that nowhere in the act is marriage restricted to "only between man and woman."

India's solicitor general has taken a stance against the legalization of same-sex marriage, telling the Delhi High Court in September that "our laws, our legal system, our society and our values do not recognize marriage, which is a sacrament, between same-sex couples."

India's LGBT+ community does not hold the same view as the government. For them, same-sex marriage does not go against Indian culture, citing Indian mythology, art and folklore with their many depictions of homosexuality and intersex people.

"What is Indian culture? There are so many differences in how people live across the country," Rituparna Borah, co-director of Nazariya Queer Feminist Resource Group, told DW.

"When the central government talks about our culture, they are referring to the Hindu upper-caste culture. This particular petition doesn't seem to challenge Hinduism. In fact, it tries to glorify the fact that Hinduism allows for transgressions," she said.

There is no uniform law for marriages in India. Marriages are registered under specific acts such as the Hindu Marriage Act, the Christian Marriage Act, Muslim personal law and the Special Marriages Act. There have even been modern instances of trans couples getting married in religious ceremonies in India.

The couple argued that things like opening a joint bank account or buying family health insurance, transactions heterosexual couples take for granted, are extremely challenging for them.

"Economic rights, adoption rights and protection against domestic violence are just some of the things that happen within the purview of marriage. Legalizing gay marriage will afford these rights to same-sex couples as well," added Borah, who does not personally subscribe to the institution of marriage.

A further hearing at the High Court has been scheduled for January 8, 2021.

However, activists say that the current Supreme Court petition is not inclusive. Sukhdeep Singh, editor of Gaylaxy magazine, an online news portal for the queer community, called the petition misguided as it doesn't include non-Hindus or inter-religious couples. He also does not think that it is the right time to be pushing for same-sex marriage.

Read more: Indian transgender politician Apsara Reddy: 'I want to be looked upon as an equal'

"India's LGBT community is not focused on marriage equality right now. What they want is acceptance from their families, communities and society. Can marriage really fix this issue?," Singh told DW.

Singh and Borah agree that the Indian queer community has a lot of work to do before same-sex marriage can become a legal reality.

"We face a lot of ill-treatment and discrimination in education, employment, housing and other aspects of daily life," he said. "I believe minorities in India — sexual and others — should come together to fight for an anti-discrimination law."