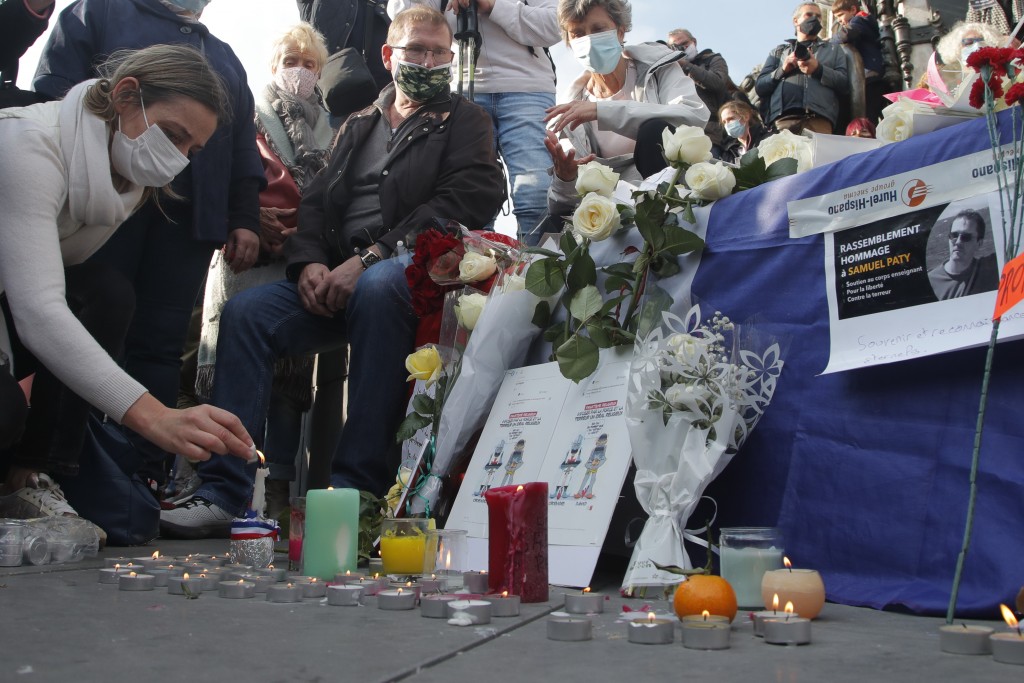 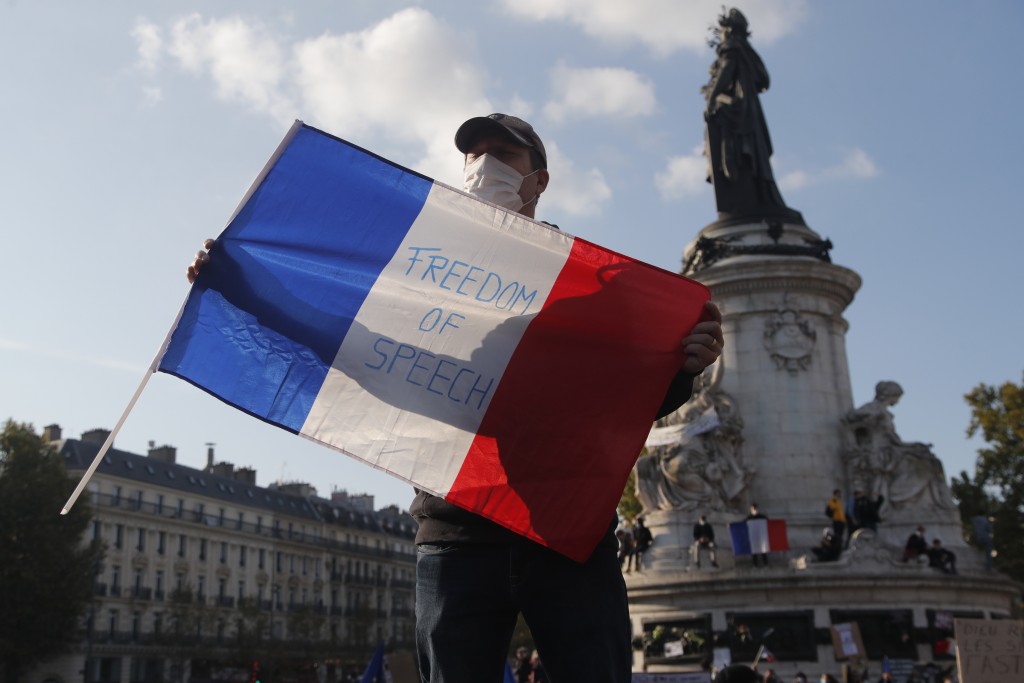 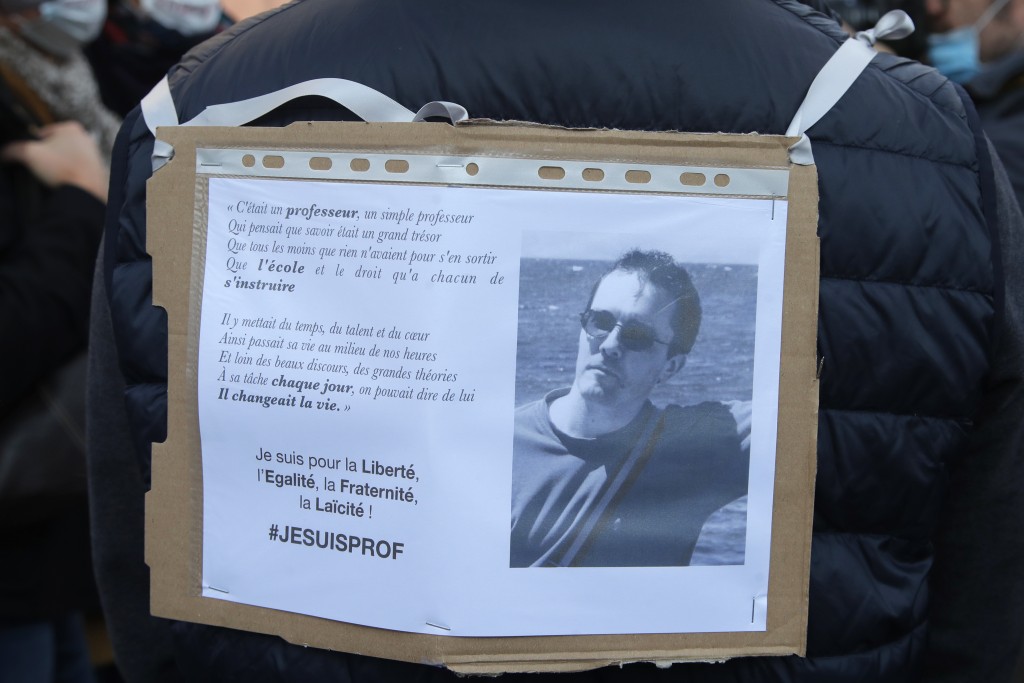 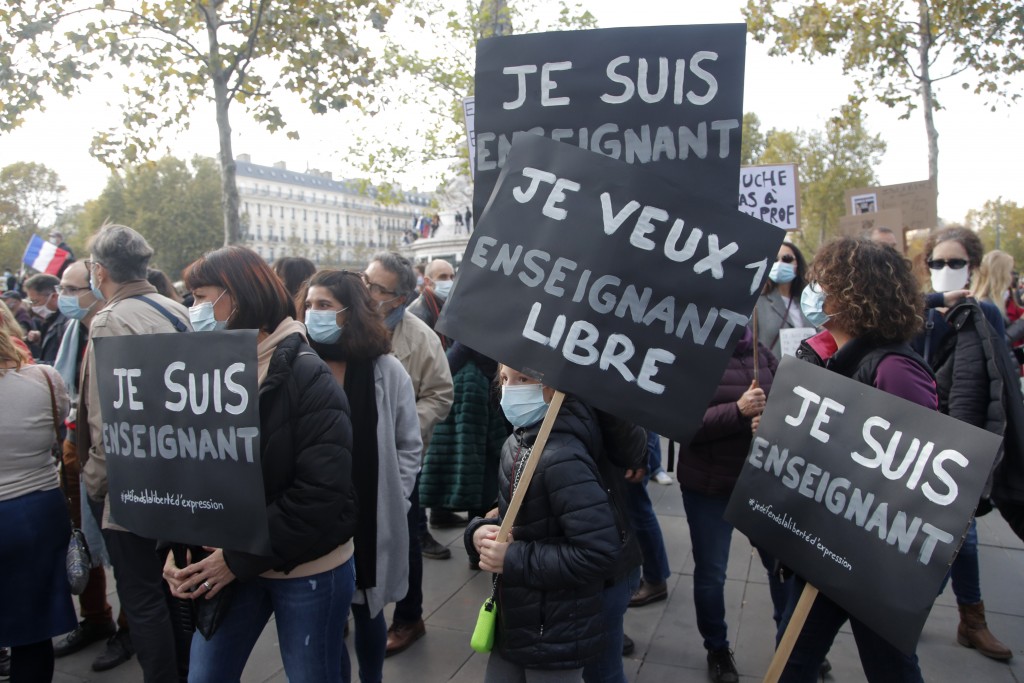 PARIS (AP) — France's interior minister said Monday that police operations are underway into dozens of people who allegedly issued messages of support for the attacker after the beheading of a history teacher near Paris.

Gerald Darmanin said on French radio Europe 1 that at least 80 cases of hate speech have been reported since Friday’s attack.

Samuel Paty was beheaded in Conflans-Sainte-Honorine, northwest of Paris, by a 18-year-old Moscow-born Chechen refugee, who was later shot dead by police. Police officials said Paty had discussed caricatures of Islam’s Prophet Muhammad with his class, leading to threats.

French President Emmanuel Macron held a defense council on Sunday at the Elysee presidential palace. The government will reinforce security at schools when classes resume on Nov. 2 after two weeks of holidays, Macron's office said.

A national homage is to be held for Paty on Wednesday.

Dozens of thousands of demonstrators gathered on Sunday across France in support of freedom of speech and in memory of the slain 47-year-old teacher.

Darmanin said they include the father of a student and an Islamist activist who both “obviously launched a fatwa," or religious ruling, against the teacher.

A man who said he was the father of a student had posted a video on social media asserting that Paty had shown an image of a naked man and told students it was “the prophet of the Muslims.” He called on other angry parents to contact him, and relay the message.

Darmanin said authorities were also looking into about 50 associations suspected of encouraging hate speech. Some will be dissolved, he said.

The president of the Conference of imams in France, Hassen Chalghoumi, said “we are hurt, we are condemning this barbaric act," on French news broadcaster BFM TV. “Samuel is a martyr of freedom.”

“Barbarism has no place in schools nor elsewhere in France,” he said.

Chalghoumi, who is an imam in Drancy, a suburb northeast of Paris, said he had received death threats and insults on social media from radical Islamists in recent days.

Justice authorities opened an investigation for murder with a suspected terrorist motive. At least four of those detained are family members of the attacker, who had been granted 10-year residency in France as a refugee in March. He was armed with a knife and an airsoft gun, which fires plastic pellets.

Anti-terrorism prosecutor Jean-Francois Ricard said a text claiming responsibility and a photograph of the victim were found on the attacker's phone.