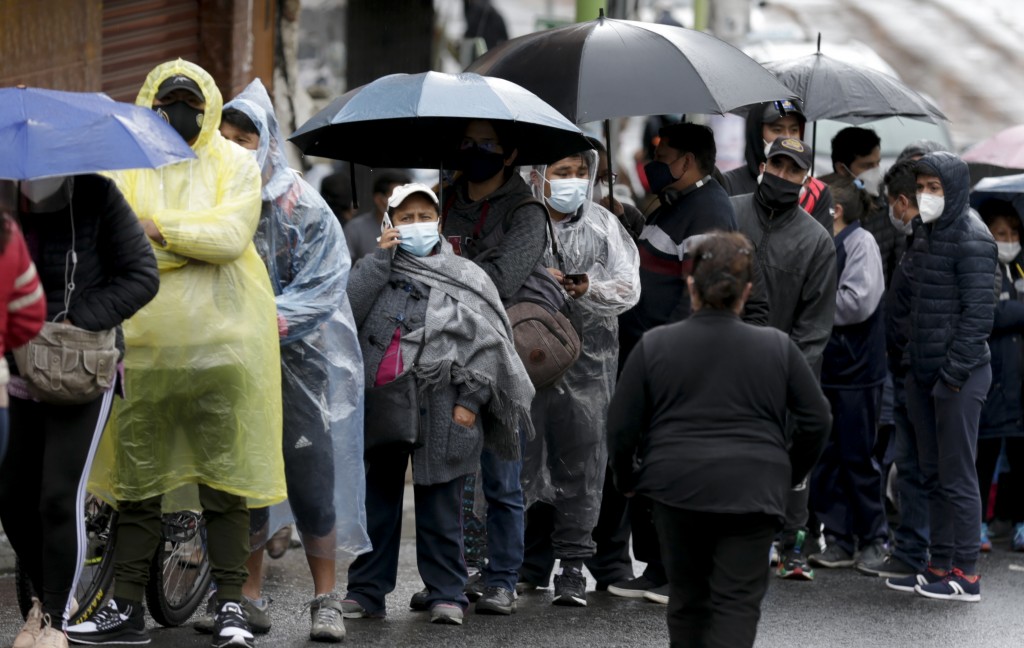 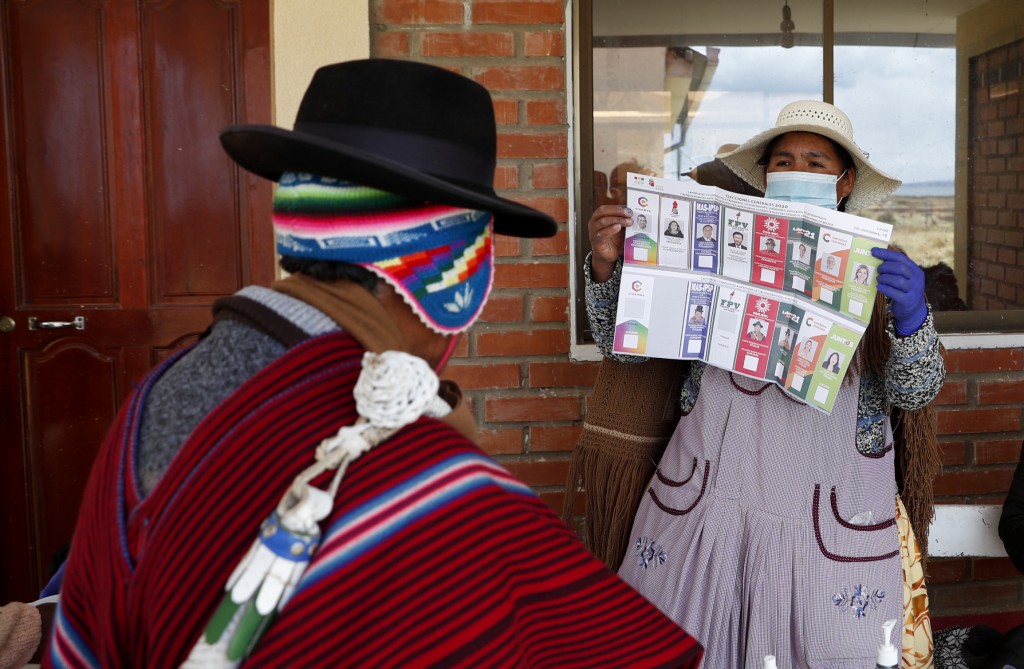 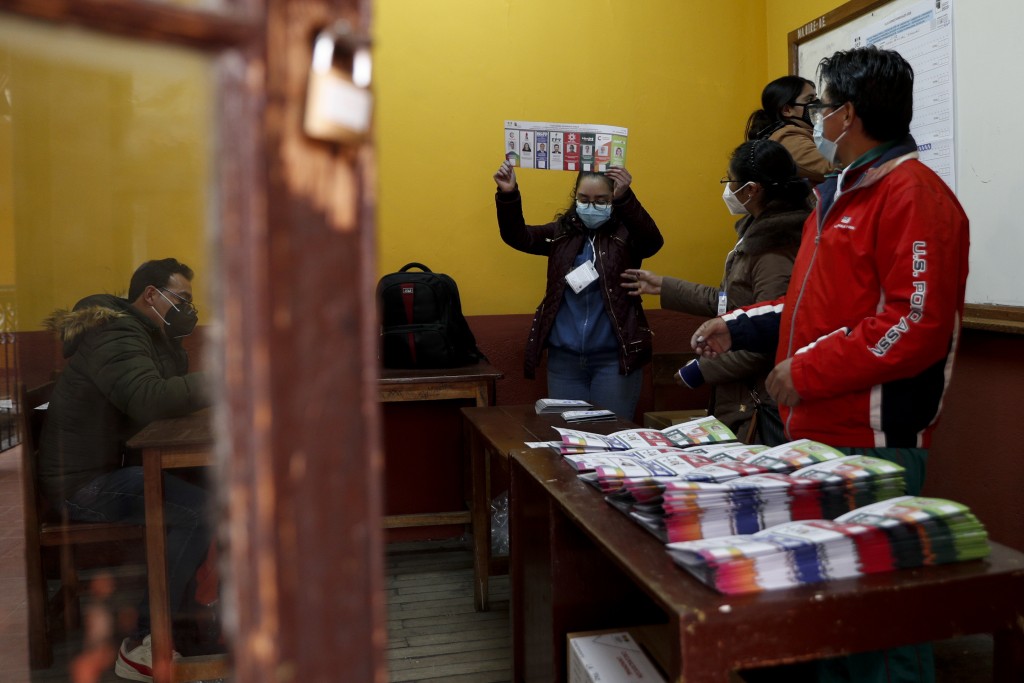 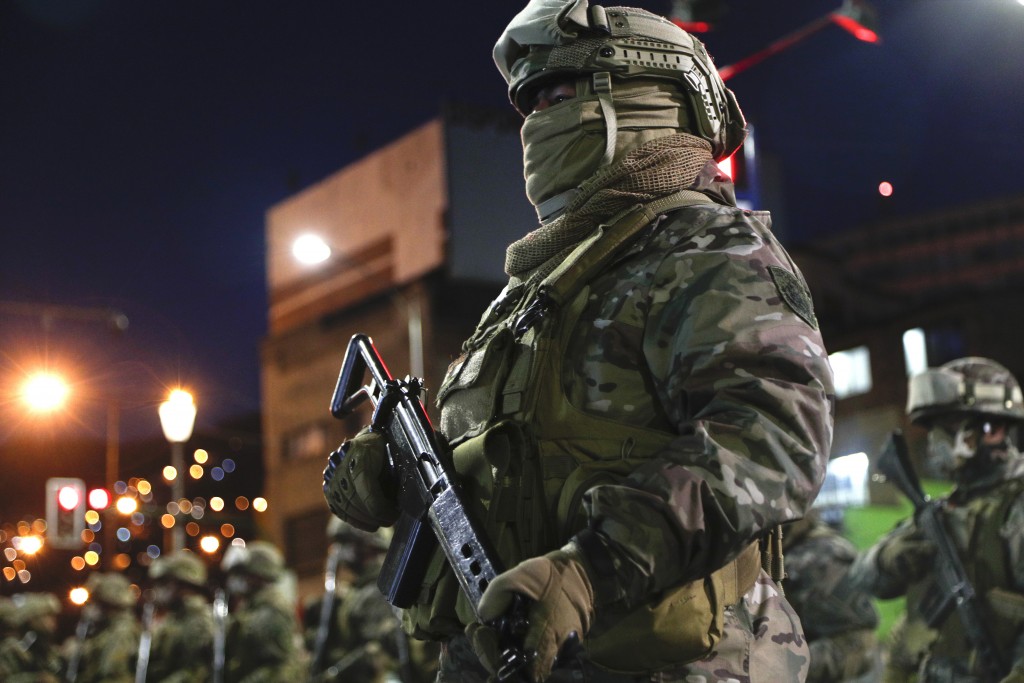 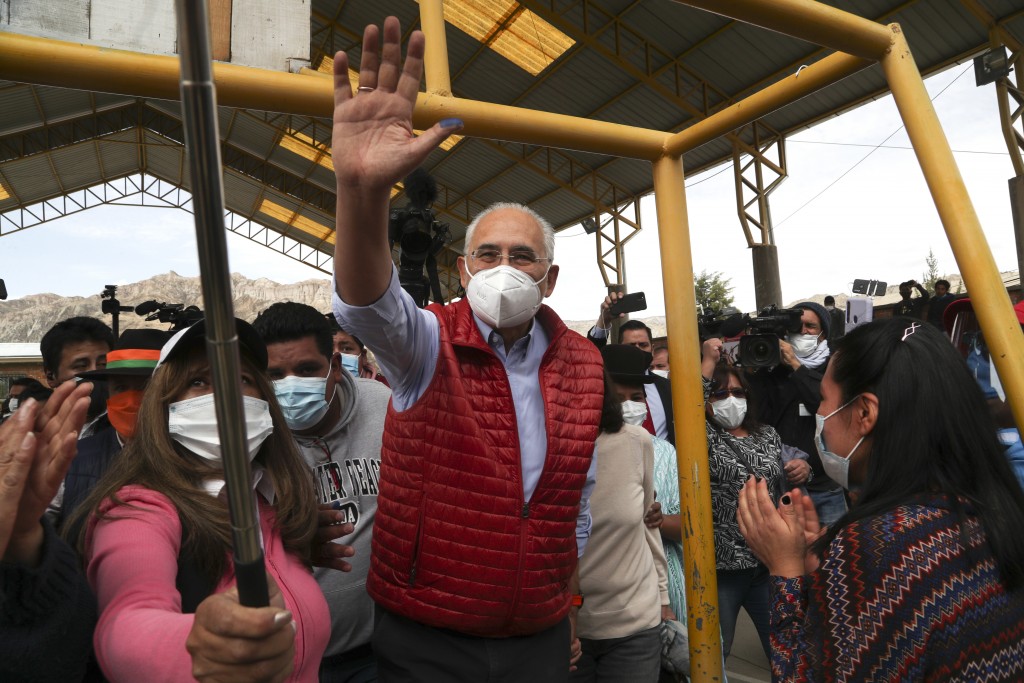 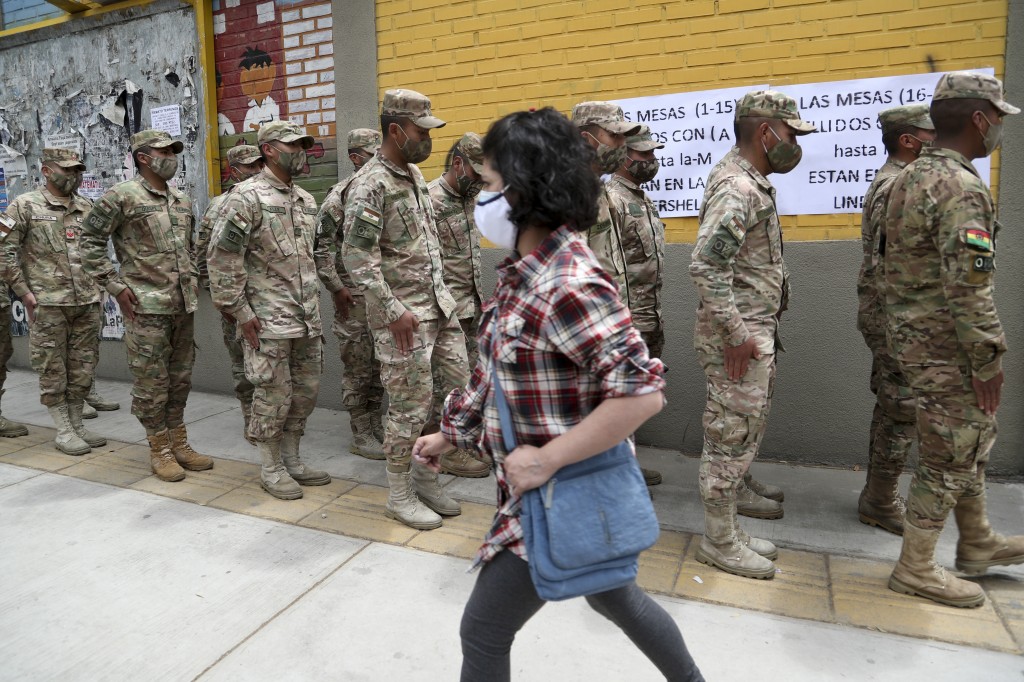 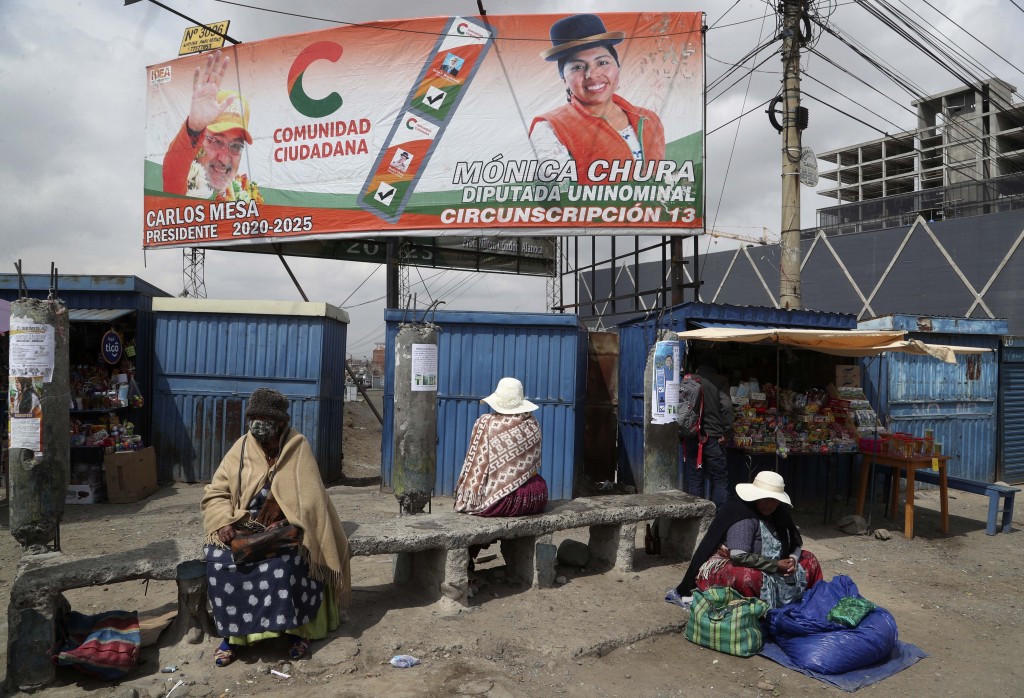 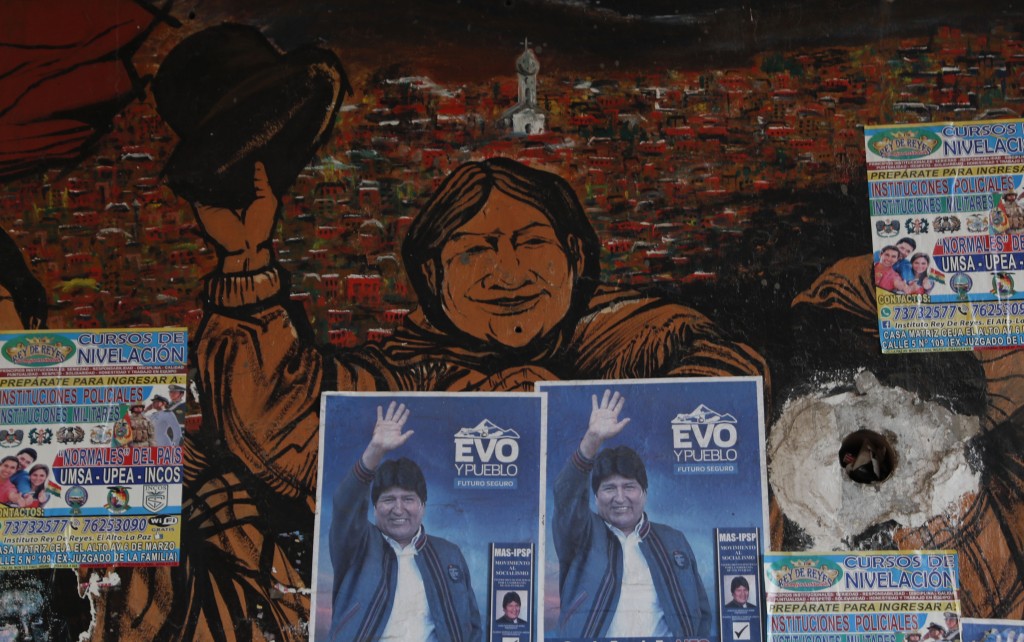 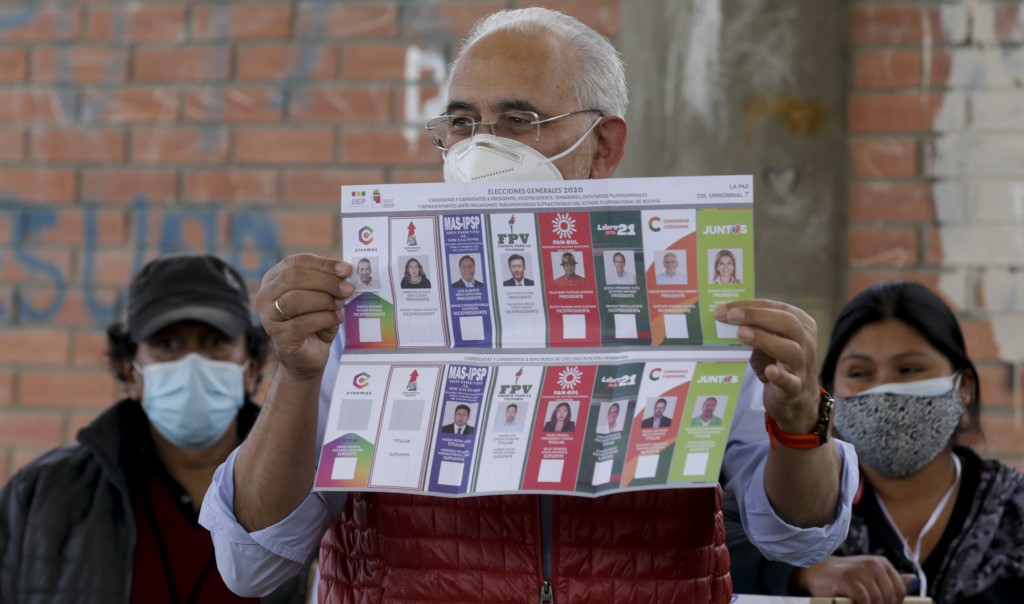 LA PAZ, Bolivia (AP) — Bolivians waited nervously for the results of Sunday’s high-stakes presidential election even as Evo Morales pre-empted authorities' slow vote count and declared his hand-picked candidate the victor in a high-stakes redo of last year’s annulled ballot that saw the leftist leader resign and leave the country.

More than six hours after polls closed, barely 4% of all ballot boxes had been counted, officials said. Adding to intrigue, publication of two exit polls were withheld after private pollsters said they didn’t trust their own survey results.

Morales, who resigned following allegations of fraud and days of violence that marred last year’s vote, broke the tense silence by declaring former Economy Minister Luis Arce the winner. A quick count of sampled polling stations by pollster Cies Mori said Arce had 52% of the votes, compared to 31% for former President Carlos Mesa, the top finisher of four conservative candidates.

“A victory has been produced for the Movement to Socialism,” Morales said in brief remarks from exile in Argentina. “Lucho will be our president.”

The early official results, which included tallies from Bolivians voting at embassies abroad, favored Mesa, the strongest of a number of conservative candidates trying to prevent a return of socialist rule. Mesa, a former journalist and historian, had 52% and Arce was second at 32%.

To win in the first round, a candidate needs more than 50% of the vote, or 40% with a lead of at least 10 percentage points over the second-place candidate. A runoff vote, if necessary, would be held Nov. 28.

Bolivians have long been accustomed to quick preliminary results in presidential elections. But after allegations of fraud and violent protests marred last year’s ballot, newly installed electoral authorities have been appealing for patience, reminding voters that they have up to five days to declare a winner.

“These are days that require maturity from each and every one of us,” interim President Jeanine Áñez said shortly after polls closed following a peaceful, mostly incident-free day of voting.

Bolivia, once one of the most politically volatile countries in Latin America, experienced a rare period of stability under Morales, the country’s first Indigenous president who resigned and fled the country late last year after his claimed election win was annulled amid allegations of fraud.

Protests over last year’s vote and later his resignation set off a period of unrest that caused at least 36 deaths. Morales called his ouster a coup and a non-elected conservative government has ruled ever since.

Sunday’s vote is an attempt to reset Bolivia’s democracy. All seats in the 136-member Legislative Assembly were also being elected.

Voting appeared to be peaceful Sunday, with long lines at some polling places but little of the hustle and bustle of past election days. Voters appeared to be wearing masks and following physical distancing restrictions.

The country’s Supreme Electoral Court announced late Saturday that it had decided unanimously against reporting quick preliminary vote totals as ballots are counted. The court said it wanted to rely on the slower official count and avoid the uncertainty that fed unrest when there was a long halt in reporting preliminary results during last year’s election.

Morales, who was barred from running, initially urged his followers to patiently wait for the results, saying from his refuge in Argentina that they should not be provoked into violence. “The great lesson we should never forget is that violence only generates violence, and with that, we all lose,” he said.

The election was postponed twice because of the coronavirus pandemic. On a per capita basis, few countries have been hit harder than impoverished, landlocked Bolivia: Nearly 8,400 of its 11.6 million people have died of COVID-19.

Overshadowing the vote is Morales, who led Bolivia from 2006 until 2019 and was a key figure in the bloc of leftist leaders who held power across much of South America. He was barred from running for the presidency or even the Senate by electoral authorities following his ouster.

Morales chose Arce, who oversaw an extended economic boom, as his stand-in for the Movement Toward Socialism party. A win by the party would be seen as a victory for Latin America’s left.

A boyhood llama herder who became prominent leading a coca grower’s union, Morales had been immensely popular while overseeing an export-led economic surge that reduced poverty during most of his rule. But support was eroding due to his reluctance to leave power, increasing authoritarian impulses and a series of corruption scandals.

He shrugged aside a public vote that had set term limits, and competed in the October 2019 presidential vote, which he claimed to have narrowly won outright. But a lengthy pause in reporting results fed suspicions of fraud and nationwide protests broke out.

When police and military leaders suggested he leave, Morales resigned and fled the country.

Jeanine Áñez, a conservative senator, proclaimed herself interim president and was accepted by the courts. Her administration, despite lacking a majority in congress, set about trying to prosecute Morales and key aides while undoing his policies, helping prompt more unrest and polarization.

She dropped out at as a candidate for Sunday’s presidential election while trailing badly in polls. That gave a boost to Mesa, a former journalist and historian who governed Bolivia following the resignation in 2003 of former President Gonzalo Sanchez de Lozada amid widespread protests.