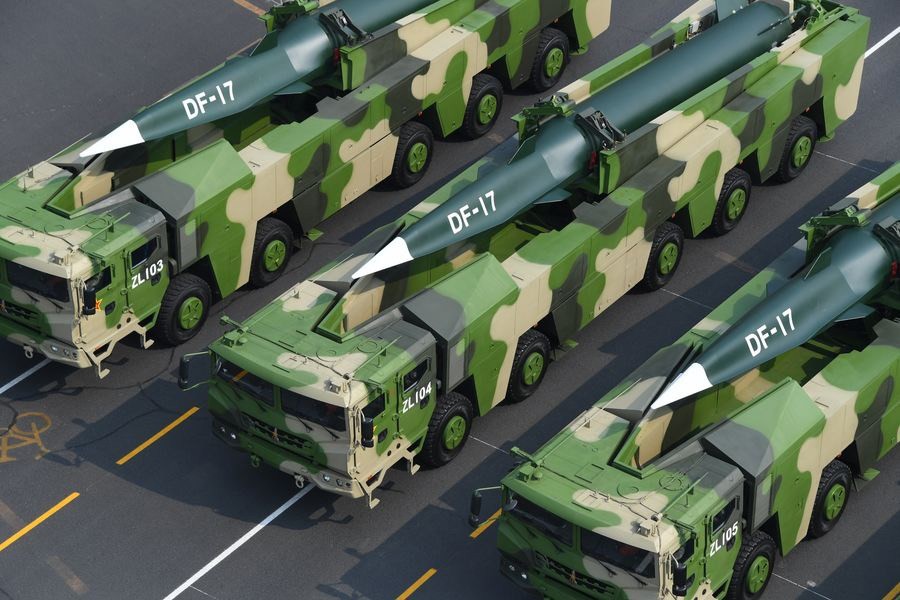 TAIPEI (Taiwan News) — China has reportedly deployed new hypersonic missiles across from Taiwan as it marshals forces in preparation for a future invasion.

On Sunday (Oct. 18), the South China Morning Post, which is owned by Alibaba Group, cited an anonymous military source as saying that China's most advanced hypersonic missile, the DF-17, is being deployed to People's Liberation Army (PLA) bases in the provinces of Fujian and Zhejiang, which sit right across from Taiwan. The deployment of the missiles is part of a PLA pattern of a beefing up of its forces along the coast of China in what some analysts are saying are preparations for an invasion of Taiwan.

According to the unnamed source, "The DF-17 hypersonic missile will gradually replace the old DF-11s and DF-15s that were deployed in the southeast region for decades." The source added that, “The new missile has a longer range and is able to hit targets more accurately.”

The DF-17 is a solid-fueled road-mobile medium-range ballistic missile that delivers a hypersonic glide vehicle with a range of 2,500 kilometers. It is feared that Taiwan’s Patriot Advanced Capability-3 (PAC-3) surface-to-air missile system may have difficulty intercepting the missile due to its ability to suddenly change direction, possibly at speeds of between Mach 5 and 10.

The deployments are part of an expansion of the Marine Corps and Rocket Force bases in Fujian and Guangdong provinces, said Andrei Chang, editor-in-chief of Kanwa Defense Review, to the newspaper. "Every rocket force brigade in Fujian and Guangdong is now fully equipped." Chang asserts that this is evidence of the communist regime's invasion plans: "The size of some of the missile bases in the Eastern and Southern theatre commands have even doubled in recent years, showing the PLA is stepping up preparations for a war targeting Taiwan."

On Sunday (Oct. 18), Democratic Progressive Party (DPP) legislator Wang Ting-yu (王定宇) reacted to the article by saying he believes the missiles have not necessarily been placed to attack Taiwan but to prevent other countries, such as the U.S. and Japan, from intervening in the event of a Chinese invasion, reported Liberty Times. Wang said that the more the Chinese Communist Party (CCP) increases its military deployments in the Indo-Pacific, the more obvious its role as "troublemaker" becomes and the more alliances such as the Quadrilateral Security Dialogue (Quad) become necessary.