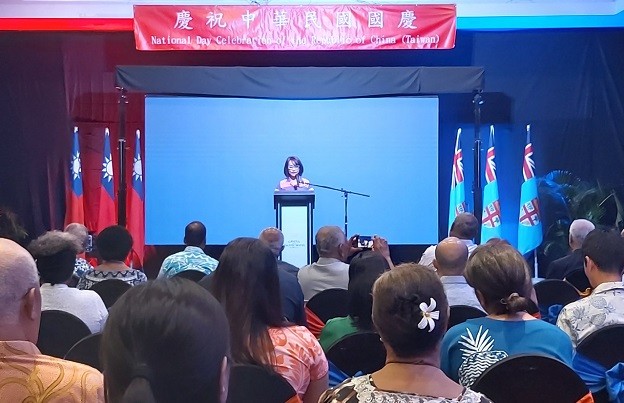 TAIPEI (Taiwan News) — A member of Taiwan's representative office in Fiji was reportedly hospitalized after being assaulted by two Chinese diplomats who crashed the office's National Day celebration earlier this month.

The Taipei Trade Office, Taiwan's de facto embassy in Fiji, on Oct. 8 hosted a reception at the Grand Pacific Hotel in Suva in celebration of Taiwan's 109th National Day. In attendance were over 100 guests, including an unnamed former prime minister, parliamentarians, and a number of civil servants, academics, and members of the overseas Chinese and Taiwanese communities.

At some point, two officials from the Chinese embassy arrived at the hotel and proceeded to photograph attendees as they entered the venue, according to Grubsheet Feejee, a blogsite run by journalist and former communications consultant Graham Davis, citing "well-placed sources."

A male Taiwanese diplomatic official asked them to leave, leading to an altercation in which he was injured to the point that he required hospital treatment. When local police arrived, they declined to take up the matter once the Chinese side claimed diplomatic immunity, per the report.

Taiwanese Ministry of Foreign Affairs Spokesperson Joanne Ou (歐江安) told Taiwan News Monday (Oct. 19) that the employee was hospitalized for a concussion but has since been discharged. She said that after the uninvited Chinese officials were removed by police, they pointed a finger at the Taiwanese man to "reverse the truth and confuse people."

Ou said the ministry had offered its condolences to the injured employee and asked the office to submit relevant evidence and statements to police and Fiji's Ministry of Foreign Affairs as well as work with local law enforcement on tightening security. MOFA has also lodged a protest with the Chinese embassy over the behavior of its staff.

In addition, MOFA has warned its representative offices elsewhere to be on guard against China's "wolf warrior" diplomacy. The ministry declined to comment why it took 11 days for the report of the incident to emerge.

The Chinese embassy in Fiji published a statement Monday saying that the allegations against its employees are "totally inconsistent with facts."

Most of the statement is focused on the perceived violation of the "one China" principle rather than on the scuffle itself, claiming that the Taiwanese side had flouted Fijian law by asserting the existence of "'two Chinas or 'one China, one Taiwan'" through the event. Fiji has official diplomatic relations with Beijing but not with Taipei.

The release does state that the Taiwanese staffer had "acted provocatively" toward the Chinese diplomats, who were "carrying out their duties" outside the venue, "causing injuries and damage to one Chinese diplomat." It does not elaborate on the nature of the "damage."

Fijian Police Spokesperson Anna Naisoro has confirmed that the authorities are investigating a complaint lodged by the Chinese embassy against the Taiwanese official in question, per Fijivillage.

Naisoro added that police have not received any report of a Taiwanese official being assaulted.

The Taiwanese representative to the country, Jessica Lee (黎倩儀) is expected to issue a statement later. Taiwan News has reached out to the Taiwan office and Fiji Police Headquarters but has yet to receive responses.

The Taipei Trade Office has only been so-named since last year when the Fijian government, under pressure from China, forced it to change its name from the "Trade Mission of the Republic of China." Taiwan has maintained a presence in the Oceanic country for almost 50 years, collaborating with it in areas such as agriculture, healthcare, and education.

Tensions between Taiwan and China continue to rise, with the latter sending military planes on regular sorties inside the former's air defense identification zone and deploying hypersonic missiles directly across from its neighbor. China has also stepped up its campaign to isolate Taiwan by excluding it from international organizations and poaching its few remaining diplomatic allies, scoring successes last year when Pacific Island nations Kiribati and the Solomon Islands switched ties.