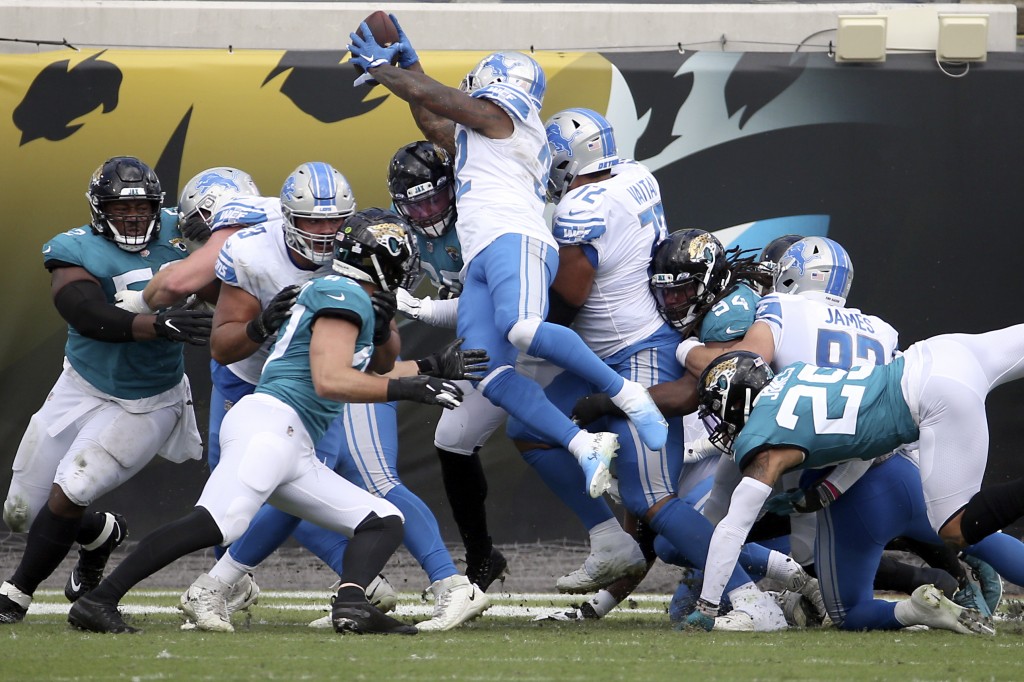 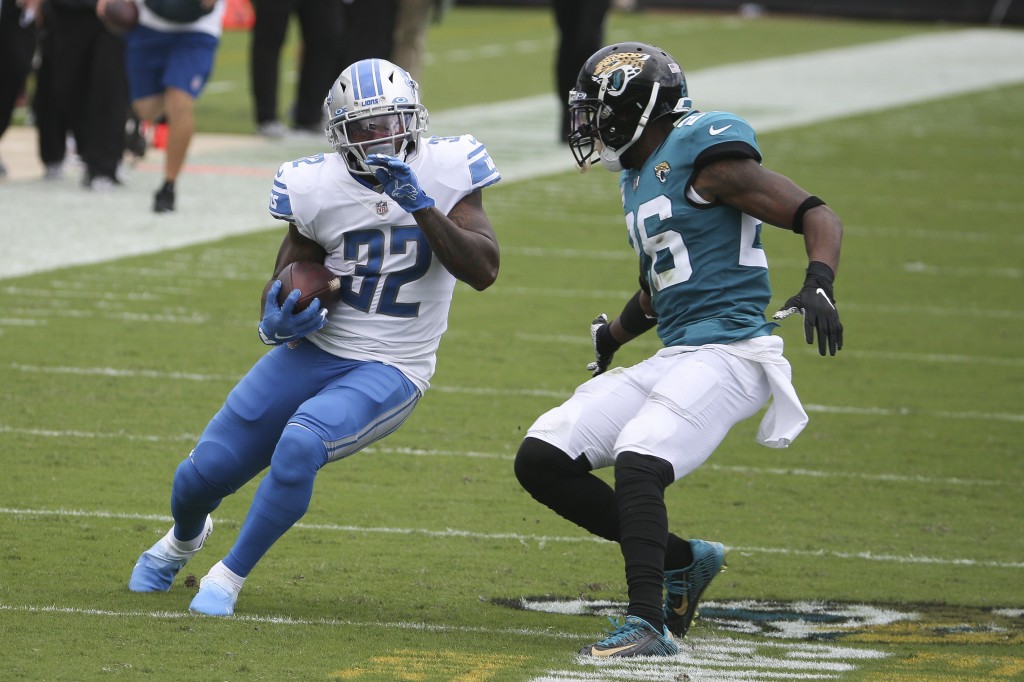 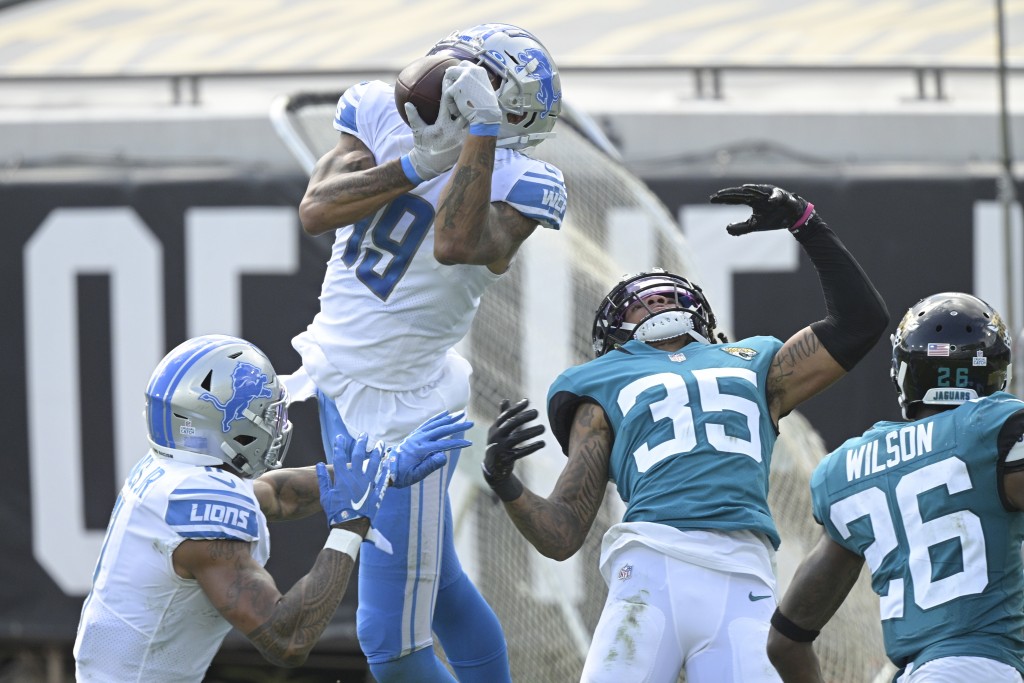 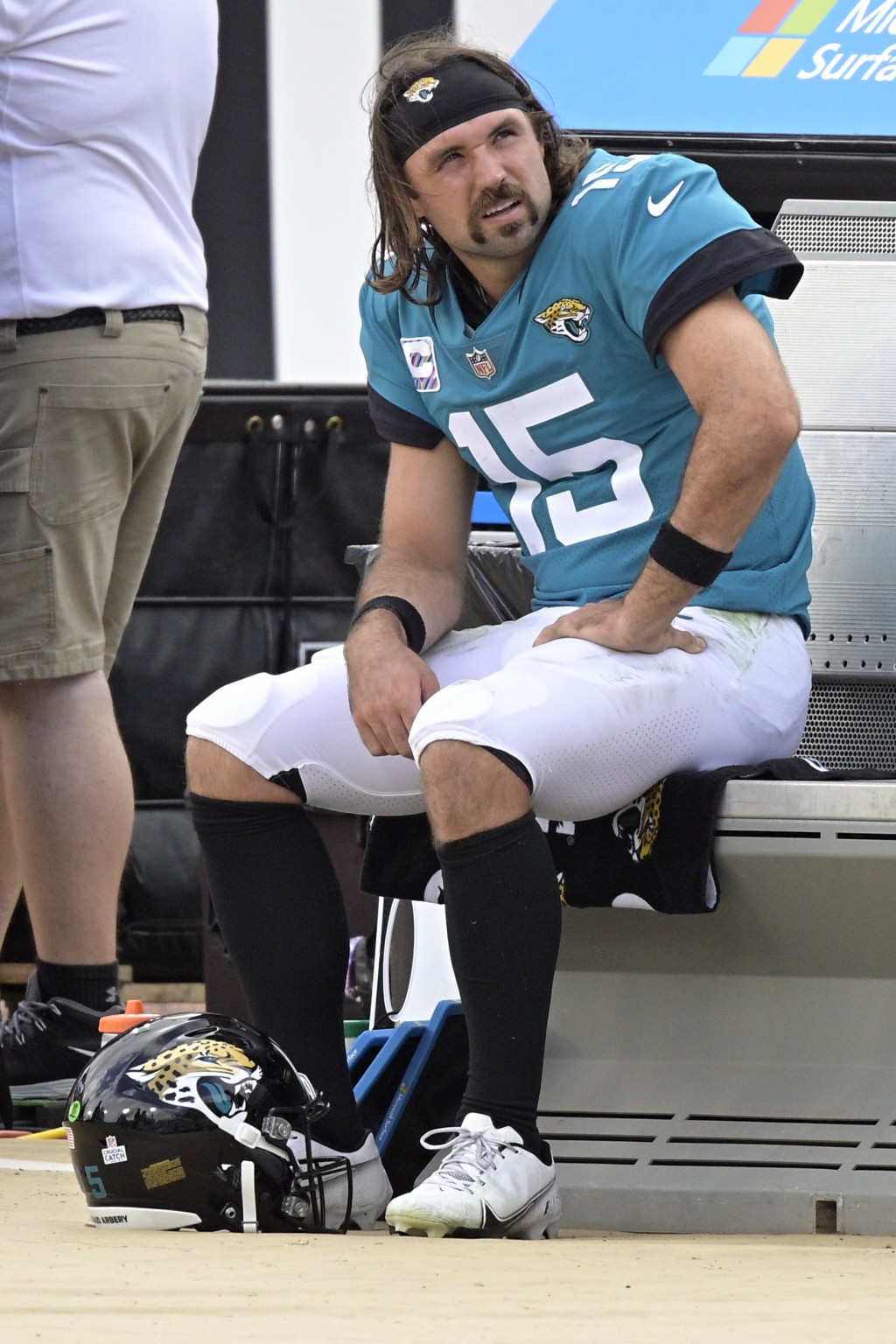 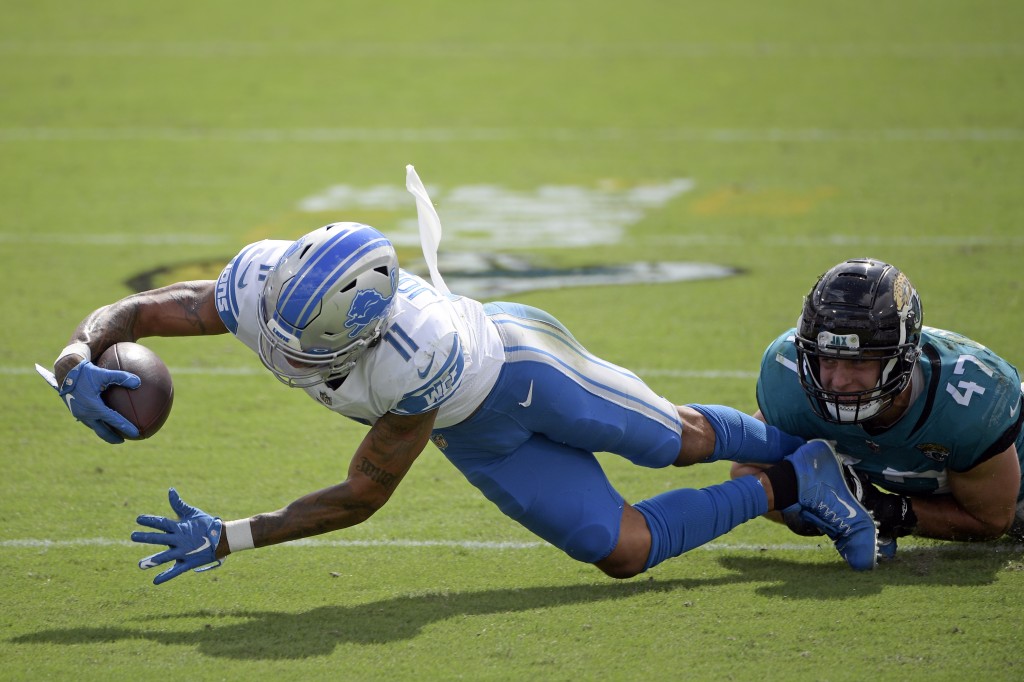 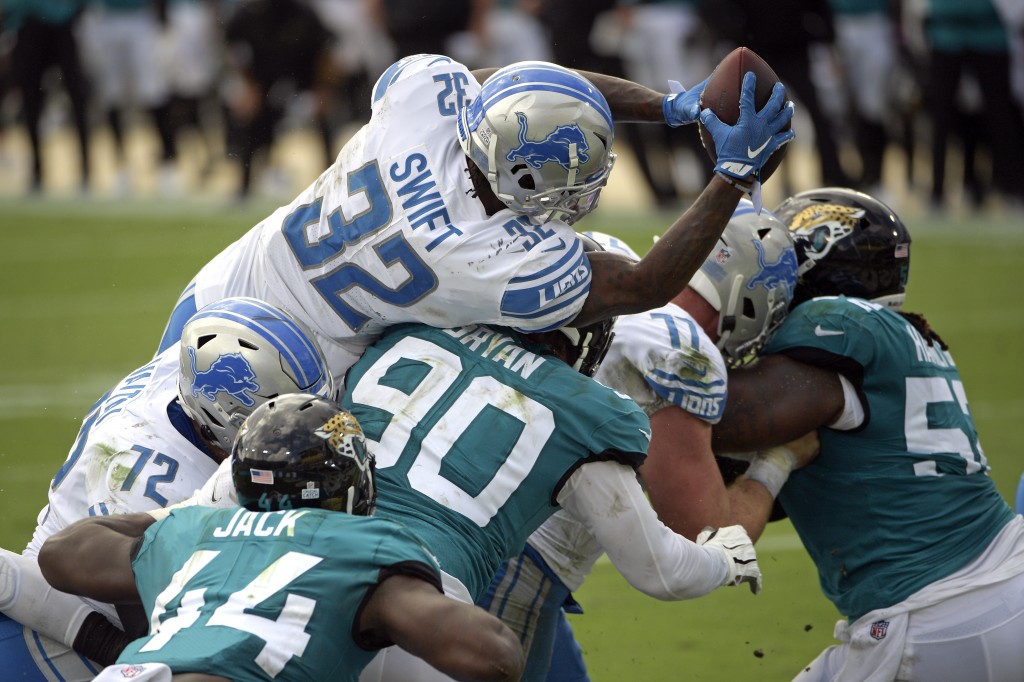 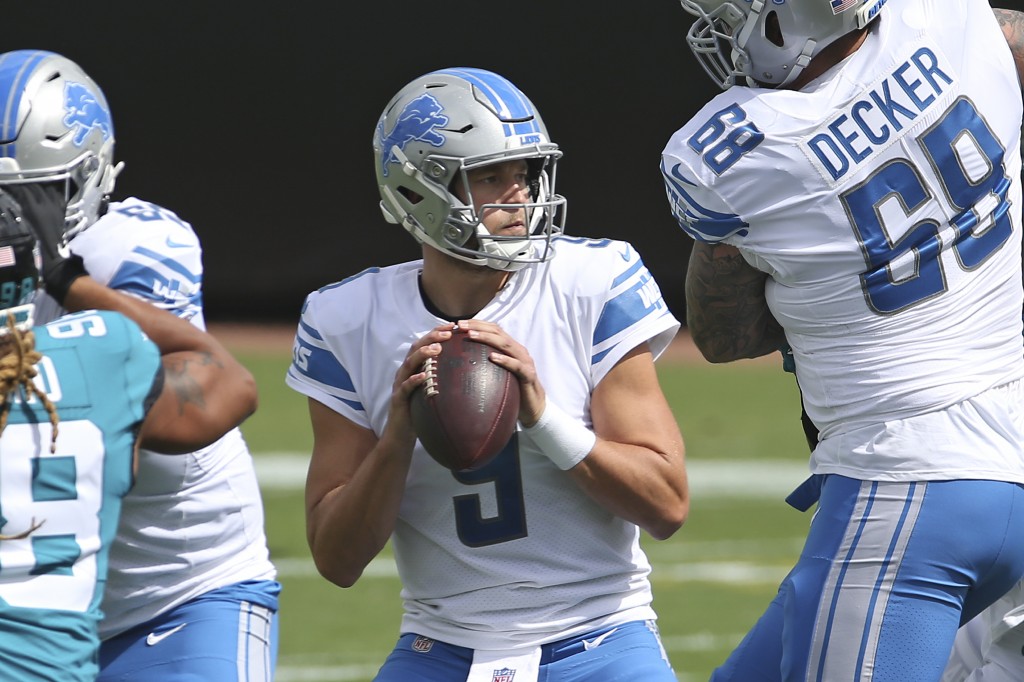 JACKSONVILLE, Fla. (AP) — The Jacksonville Jaguars have a new benchmark for bad defense.

The Jaguars allowed at least 30 points for a franchise-record fifth consecutive game in a 34-16 loss to Detroit on Sunday. They also gave up more than 400 yards for the fourth time in six games this season.

It should be enough to at least put defensive coordinator Todd Wash’s job in jeopardy. But coach Doug Marrone made it clear nothing could be further from the truth.

It was a stunning revelation considering Jacksonville’s defense is on pace to be the worst in franchise history. The Jaguars (1-5) can’t stop the run — rookie D'Andre Swift had a breakout performance as Detroit finished with 180 yards on the ground — and haven’t had much more success against the pass.

“I think we all have to get better,” Marrone said. “I’m going to acknowledge that. We’ve tried to do everything. We’ve done things. We’ve worked on them. We’ve changed things up. We’ve pressured. We’ve played defense. We need someone to step up and make plays.”

Marrone pointed to a litany of mistakes that aided touchdown drives Sunday. Stafford scrambled for 17 yards on one third down. Rookie K’Lavon Chaisson jumped offsides on another. The unit failed to plug a gap, and Swift broke free for a 54-yard gain.

“Right now, I don’t see any options,” Marrone said, making it clear the recurring mistakes are on players, not coaches. “We’ve just got to keep working to get these guys better and be able to make some plays, and that’s what’s hurting us.

“It’s not a lack of not trying to change things, which we have been.”

The defense isn’t getting much help, either.

James Robinson got nothing going on the ground, finishing with 29 yards on 12 carries. Gardner Minshew turned the ball over twice. And even punter Logan Cooke delivered a 29-yard dud that gave the Lions a short field and set up their first touchdown.

“There’s not a guy on this team that likes losing or even wants to tolerate losing,” Minshew said. “We’re definitely frustrated. This kind of feels like the same story each week, ‘All right, what’s our solution? What’s our solution?’ We’ve got to start finding it.

“I think the urgency right now should be at an all-time high. That being said, I believe we have the guys in our building to do it. We just have to come back together — I know y’all are sick of hearing it — but we’ve got to come back together, have a good week of practice and win one game at a time.”

Jacksonville has now dropped 11 of its last 14 games, the kind of futile stretch that has become all too familiar for the franchise.

Something needs to change. But it won’t be Wash, at least not right now.

“I’ve been here three years and still haven’t really won,” receiver DJ Chark said. “It makes it tough. It makes it hard. It makes football more difficult, but the only way out of it is to win. …

“Personally, I don’t feel like any of these teams are just better than us. I don’t know if you’re supposed to say that or not, but I don’t. But when you walk off the field and it’s 31-10 or 31-whatever it is, you can’t make that argument too much.”