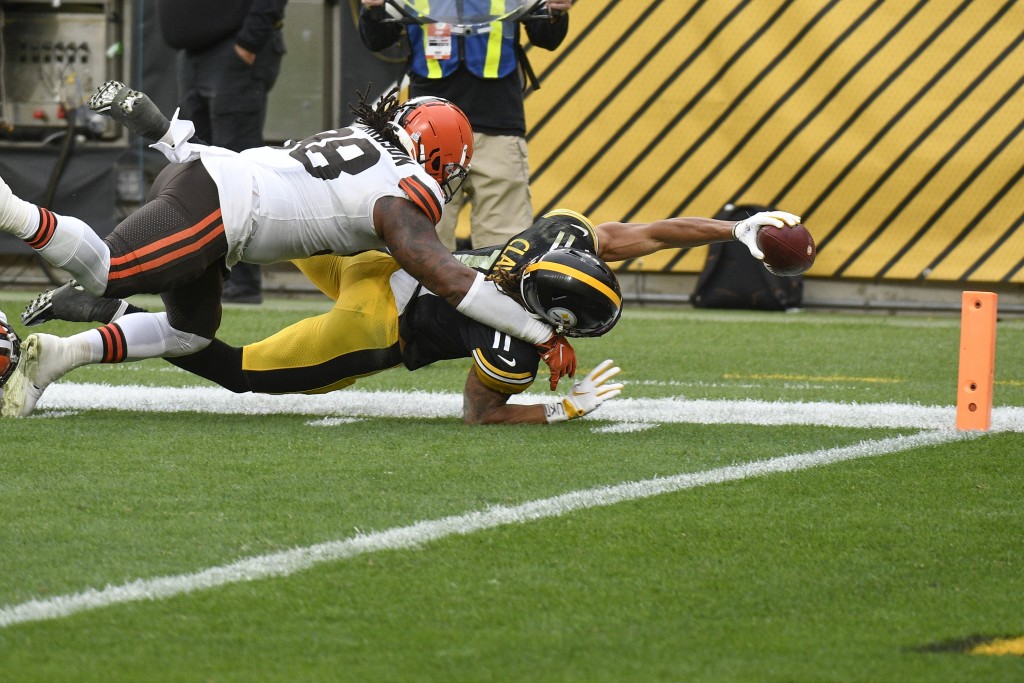 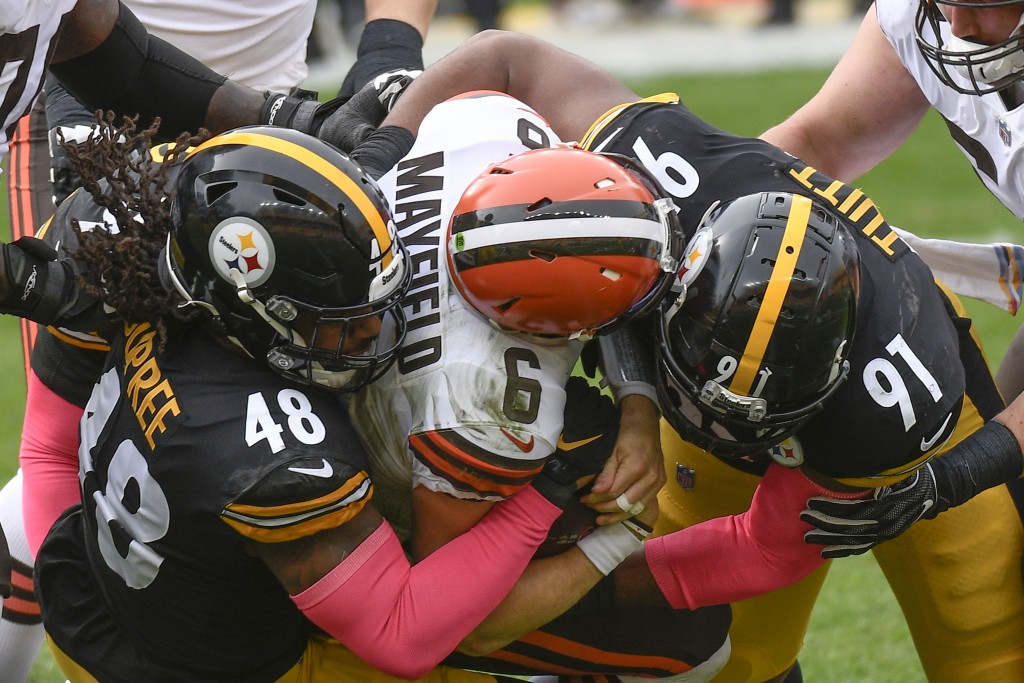 PITTSBURGH (AP) — Not yet Cleveland. At least, not in Pittsburgh.

James Conner ran for 101 yards and a touchdown and the Steelers battered the Browns in a 38-7 blowout victory on Sunday to improve to 5-0 for the first time since 1978. Ben Roethlisberger added 162 yards passing and a score.

The Browns (4-2) were unable to get anything going against a defense that sacked aching Baker Mayfield four times, picked him off twice and chased him late in the third quarter with the game out of reach. The NFL’s top rushing offense managed 75 yards on the ground — 113 below its season average — as the Steelers dominated both sides of the line of scrimmage in easily their best performance in 2020.

Safety Minkah Fitzpatrick stepped in front of a Mayfield pass and raced 33 yards to the end zone fors an early 10-0 lead. The Browns, off to the franchise’s best start since 1994, never really recovered in a stadium where they haven’t won since Mayfield was in elementary school.

PHILADELPHIA (AP) — Lamar Jackson threw for a touchdown and ran for a score and the Ravens held on.

The Eagles (1-4-1) came in missing seven offensive starters, including four offensive linemen, and then lost two more when running back Miles Sanders left in the third quarter and tight end Zach Ertz exited in the fourth.

Still, the Ravens (5-1) needed to prevent a 2-point conversion with 1:55 remaining to secure the win. Carson Wentz was stopped by L.J. Fort and Matthew Judon trying to run it in. The Eagles wouldn’t have needed the conversion after Wentz sneaked in from the 1 if coach Doug Pederson kicked the extra point when they scored early in the third quarter to cut Baltimore’s deficit to 17-6.

Wentz tossed two TD passes, was sacked six times and managed to finish the game along with center Jason Kelce as Philadelphia’s only healthy starters.

Jackson, the reigning NFL MVP, was efficient, passing for 186 yards. He ran for a 37-yard TD and had 108 yards on the ground.

Sunday’s game was originally scheduled for last week but got postponed twice, first by a day, then by seven. The delay was caused after multiple Patriots players tested positive for COVID-19, including quarterback Cam Newton and reigning Defensive Player of the Year cornerback Stephon Gilmore.

New England (2-3) rallied from an 18-3 deficit and nearly pulled off the comeback, but had three turnovers.

Drew Lock finished 10 of 24 for 189 yards in his first start since injuring his shoulder in Denver’s Week 2 loss to Pittsburgh. He was steady early, but had back-to-back interceptions in the fourth quarter to let the Patriots back into the game.

Denver’s defense entered the game with two takeaways on the season. It forced three on Sunday, coming up with two interceptions and a fumble recovery. That underscored a rough day for New England, which was held to 288 yards.

It was the first game back for Newton, who returned after missing New England’s Week 4 loss at Kansas City. He finished 17 of 25 for 157 yards. He also rushed 10 times for 76 yards and touchdown.

NASHVILLE, Tenn. (AP) — Derrick Henry took a direct snap and ran 5 yards for a touchdown 3:30 into overtime and the Titans remained undefeated.

The Titans (5-0) overcame two turnovers, Stephen Gostkowski having a field goal blocked and missing another, and the defense giving up 335 yards passing and four touchdown passes to Deshaun Watson.

Ryan Tannehill, who had three of his 19 career winning drives to start this season, drove the Titans 76 yards before finding A.J. Brown on a 6-yard TD pass with 4 seconds left. Gostkowski made the extra point.

Henry, last season’s rushing leader, ran for 202 yards in regulation, including a 94-yard TD sprint. In overtime, he took a screen pass 53 yards on the second play. He capped the six-play, 82-yard drive with a wildcat snap for his second TD, finishing with 212 yards rushing and 52 yards receiving.

The Titans have their second-best start in franchise history since winning the first 10 games in 2008. Their win, combined with Pittsburgh’s victory over Cleveland, sets up a showdown between the AFC’s last two undefeated teams here in a week.