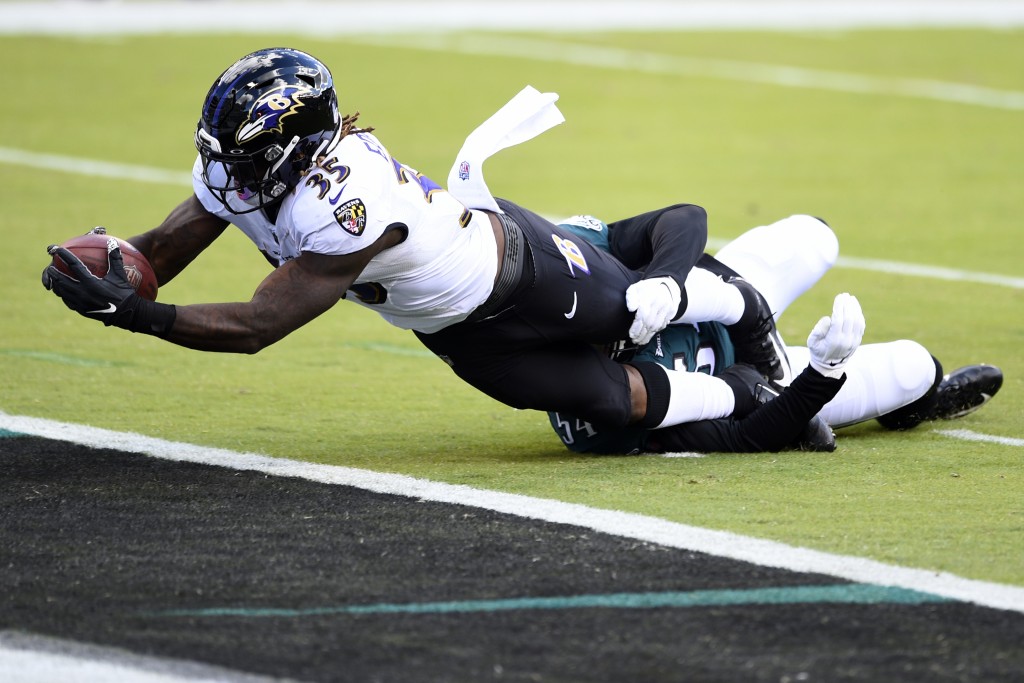 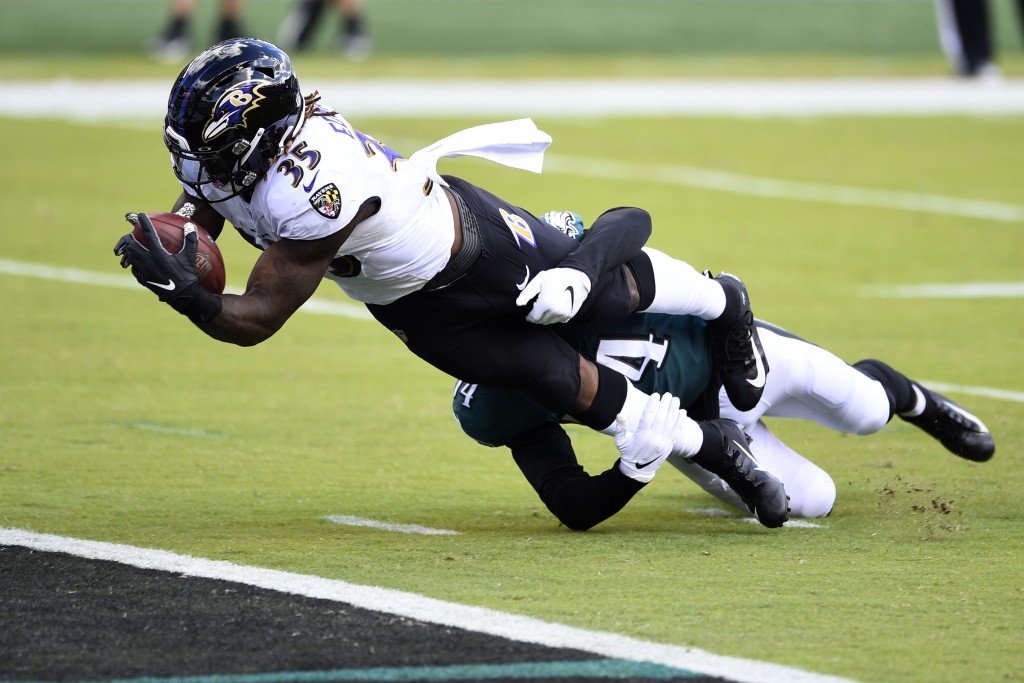 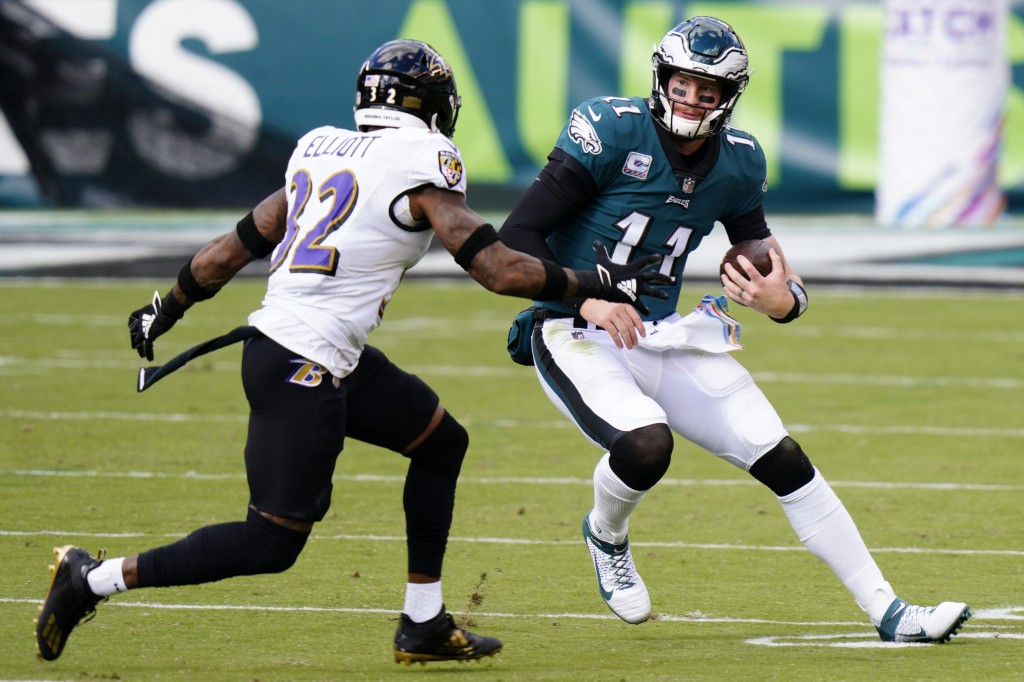 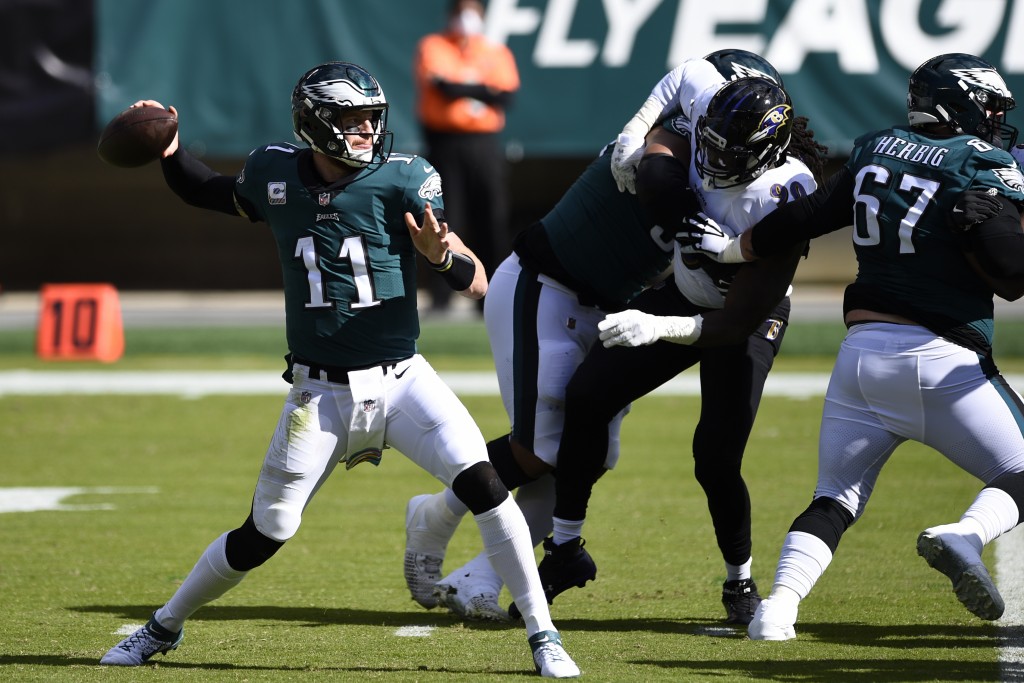 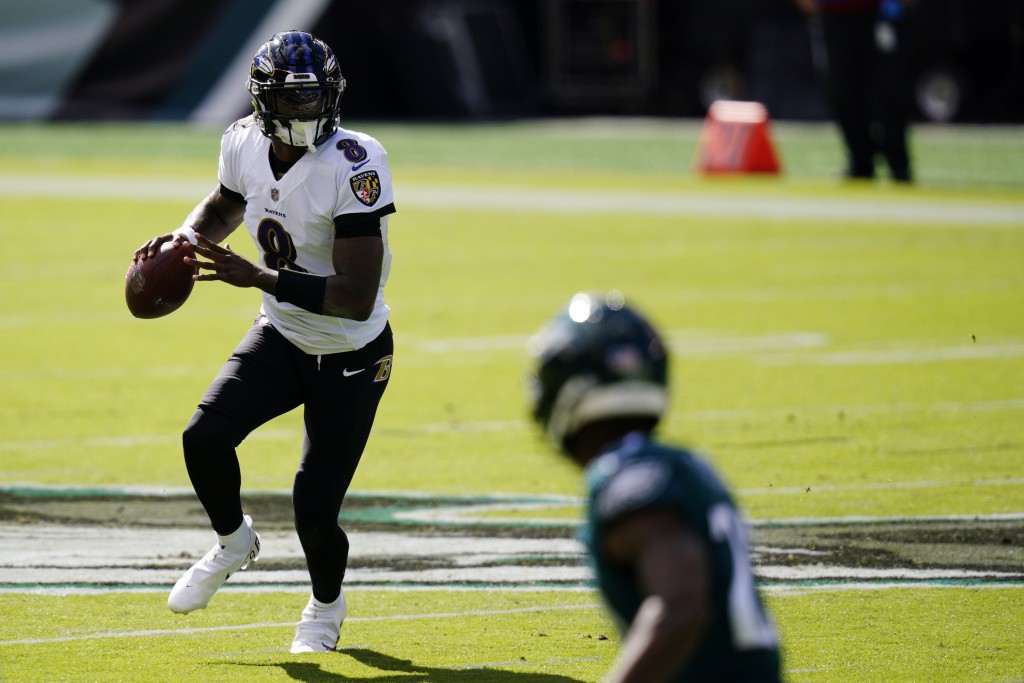 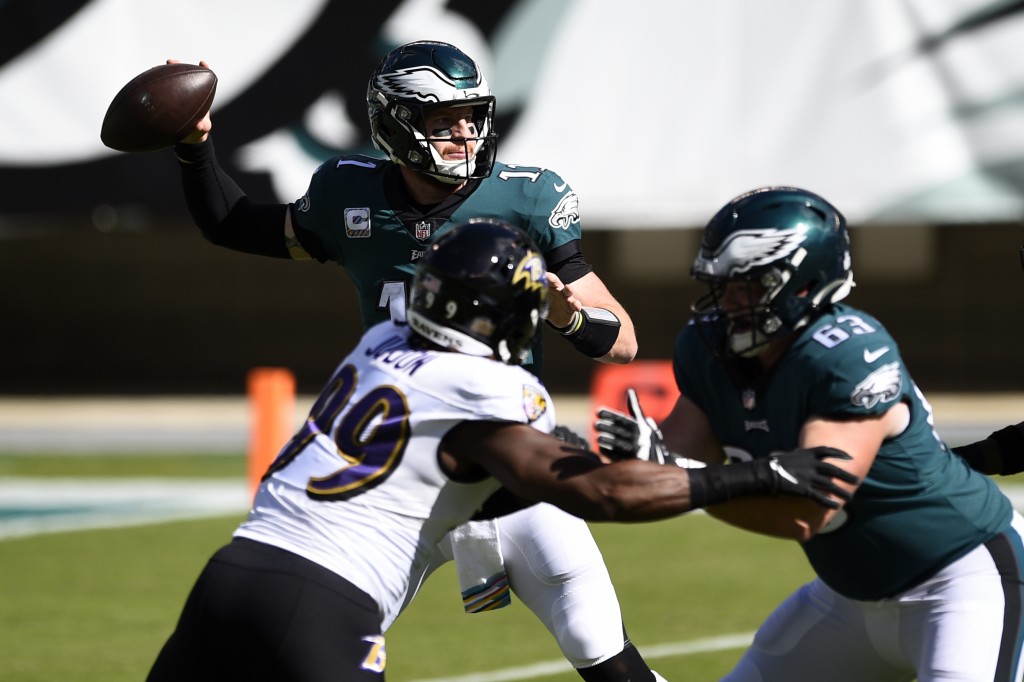 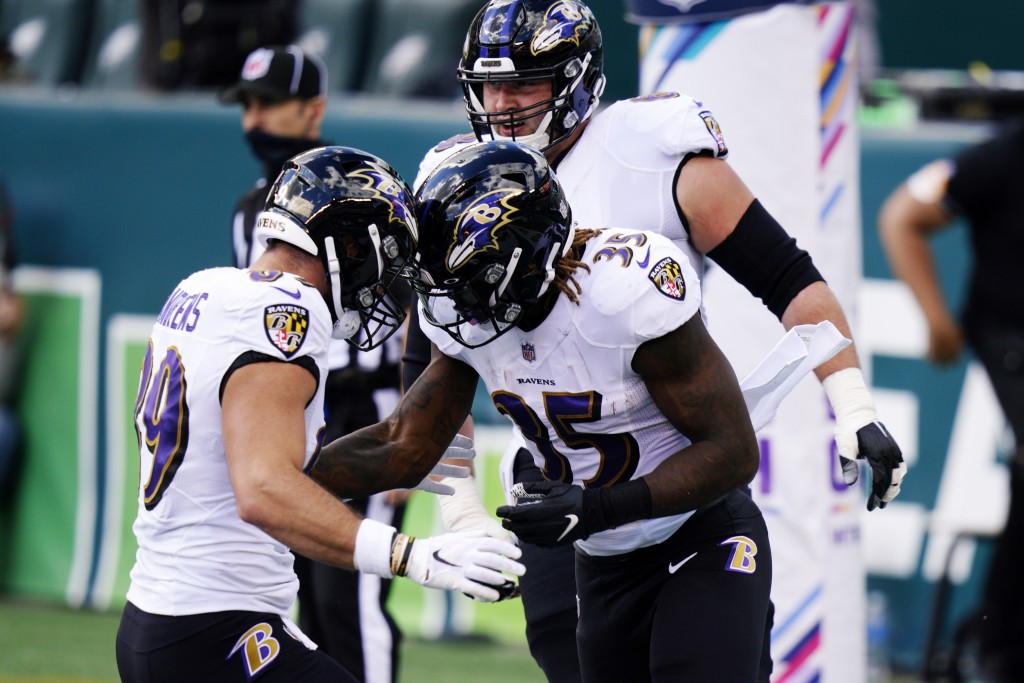 PHILADELPHIA (AP) — Lamar Jackson threw for a touchdown and ran for a score and the Baltimore Ravens held on for a 30-28 victory over the depleted Philadelphia Eagles on Sunday.

The Eagles (1-4-1) came in missing seven offensive starters, including four offensive linemen, and then lost two more when running back Miles Sanders left in the third quarter and tight end Zach Ertz exited in the fourth.

Still, the Ravens (5-1) needed to prevent a 2-point conversion with 1:55 remaining to secure the win. Carson Wentz was stopped by L.J. Fort and Matthew Judon trying to run it in.

The Eagles wouldn’t have needed the conversion after Wentz sneaked in from the 1 if coach Doug Pederson kicked the extra point when they scored early in the third quarter to cut Baltimore’s deficit to 17-6.

Wentz tossed two TD passes, was sacked six times and managed to finish the game along with center Jason Kelce as Philadelphia’s only healthy starters.

Jackson, the reigning NFL MVP, was efficient, passing for 186 yards. He ran for a 37-yard TD and had 108 yards on the ground.

The Eagles cut it to 30-22 when Wentz avoided pressure and heaved an 18-yard TD pass to Travis Fulgham into triple coverage on fourth-and-9. He connected with J.J. Arcega-Whiteside on the 2-point conversion.

Philadelphia’s defense forced a punt and got the ball with a chance to tie. A 49-yard pass interference penalty on Marcus Peters against Fulgham put the ball at the Ravens 22. Wentz scored a few plays later, but couldn’t get in the end zone to tie it on the conversion.

Down 17-0, the Eagles scored on their second play of the second half when Miles Sanders ran 74 yards, fumbled and Arcega-Whiteside recovered it in the end zone. Jalen Hurts was stopped on a 2-point conversion.

Jackson answered with a 37-yard TD run up the middle on the next possession, extending Baltimore’s lead to 24-6.

Wentz tossed a 3-yard TD pass to Jason Croom and connected with Greg Ward on the 2-point conversion to cut it to 24-14 less than two minutes into the fourth quarter.

On the game’s opening drive, the Eagles missed an opportunity when John Hightower dropped a perfect deep pass that hit his hands in stride on third-and-23.

The Eagles ended up going three-and-out on their first three possessions, gaining just 2 yards. Wentz ran for 5 yards on first down on the fourth drive, tried to knock over defenders and got stripped at the Eagles 28.

Hurts ran for 20 yards to give Philadelphia a first down for the first time on the offense’s seventh possession. The drive stalled at the Ravens 20 when Wentz was stopped on a fourth-and-1 sneak. Sanders dropped a pass in the end zone two plays earlier.

Jake Elliott missed a 51-yard field goal wide right at the end of the first half.

The Ravens have forced a turnover in 19 straight games, the longest active streak in the NFL and second-longest in franchise history. Baltimore has 33 takeaways during the 19-game stretch.

Baltimore has scored at least 20 points in 29 straight regular-season games since Jackson became the starter in Week 11 of the 2018 season. It’s the second-longest such streak in NFL history behind Denver, which did it 30 consecutive games from 2012-14.

Ravens: Host Pittsburgh on Nov. 1 after taking a rescheduled bye on Oct. 25.