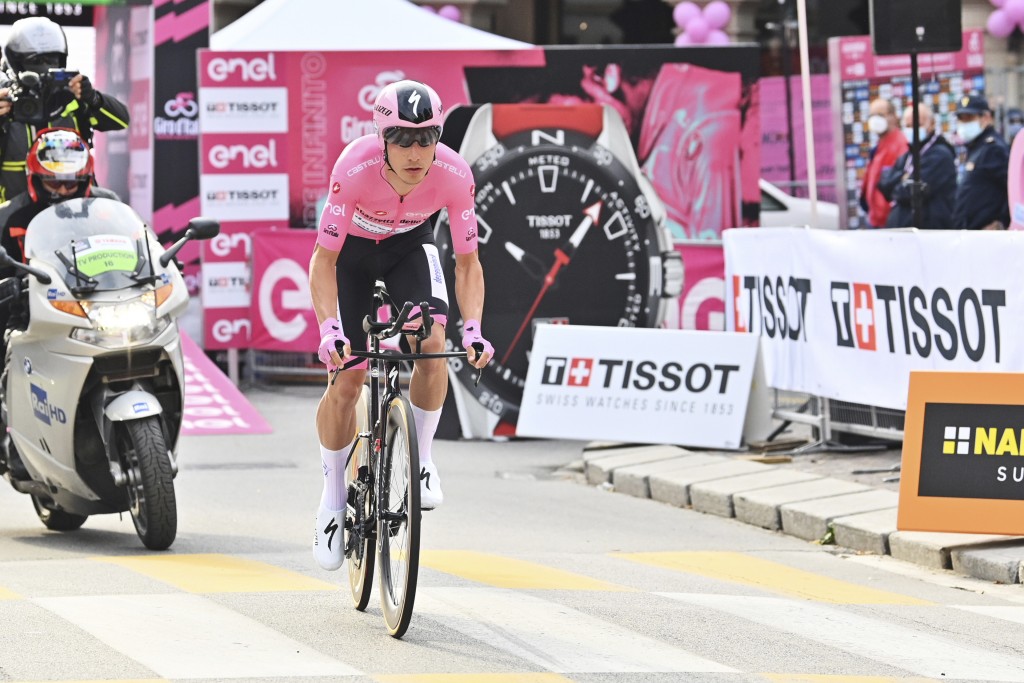 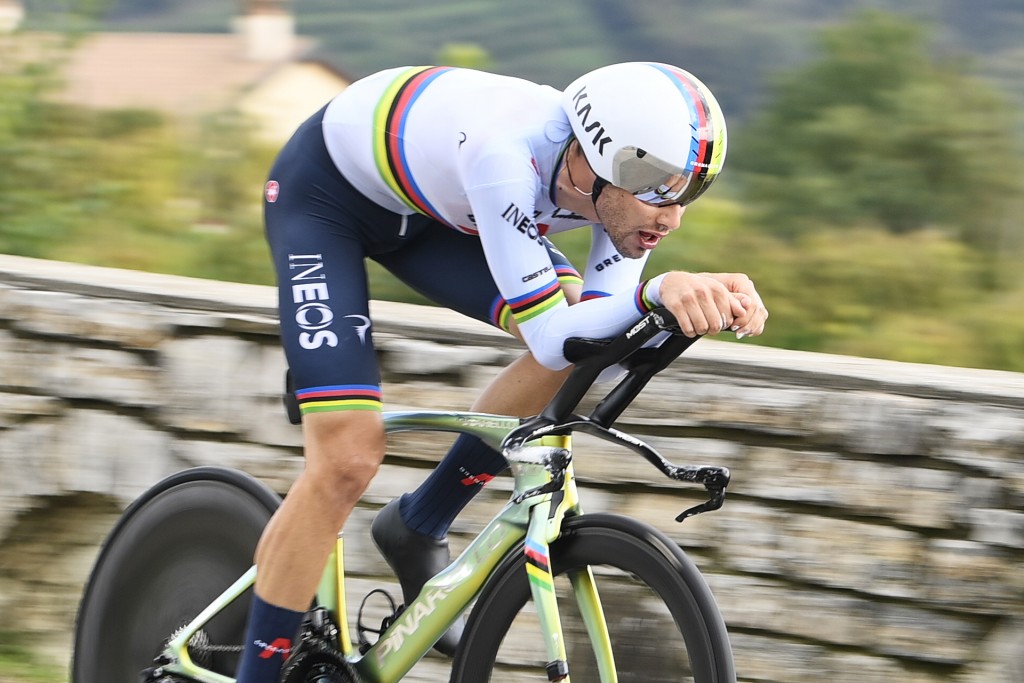 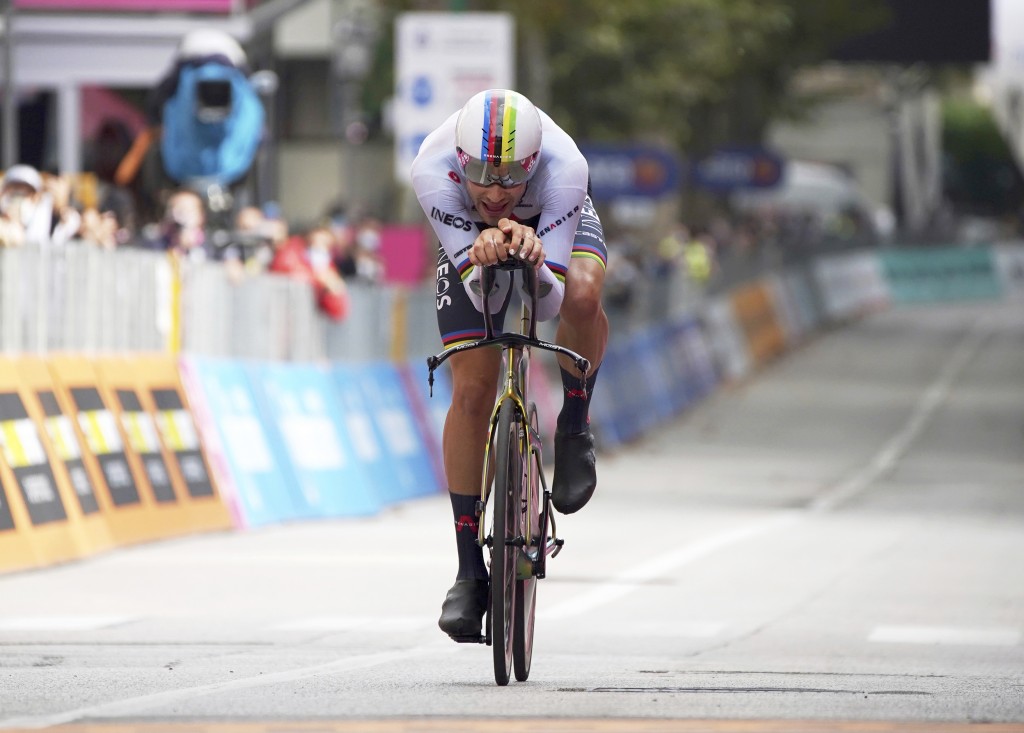 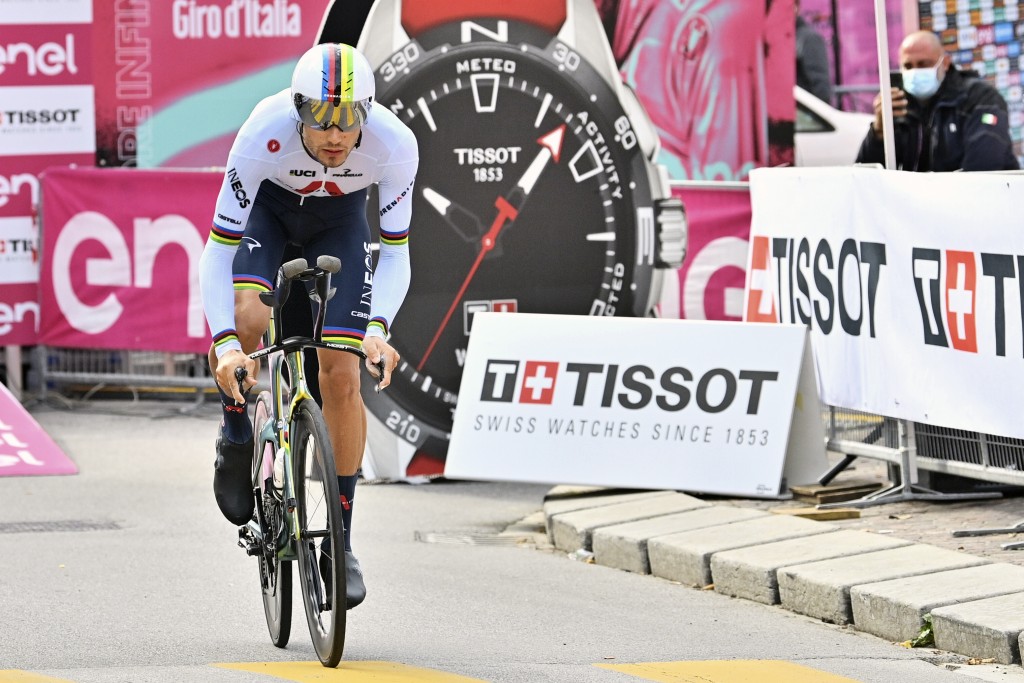 The 22-year-old Almeida is riding the first Grand Tour of his career and has held the lead since a strong effort up Mount Etna in Stage 3.

Only one more week of racing remains before the race ends in Milan next weekend with another individual time trial -- although the final week is filled with grueling climbs through northern Italy and Almeida himself has acknowledged that he has no idea how his body will react to a third consecutive week of racing.

Ganna rode at an average speed of 48 kph (30 mph) along the 34.1-kilometer (21-mile) route through Prosecco vineyards from Conegliano to Valdobbiadene.

The course included a brief but very steep climb shortly after the start, the Muro di Ca’ del Poggio. A 1.1-kilometer “wall,” the climb featured an average gradient of 12.3% with one section at 19%.

Fans -- most of them wearing masks -- crowded both sides of the road along the climb.

Almeida -- the last rider on the course -- finished sixth, 1:31 behind Ganna. The Deceuninck-Quick Step rider now leads Wilco Kelderman by 56 seconds in the overall standings.

Pello Bilbao remained third overall, 2:11 behind, while McNulty moved up from 11th to fourth and trails by 2:23.

Of the top five in the standings, only McNulty finished ahead of Almeida in the time trial.

Ganna also won the race-opening time trial in Palermo and then took Stage 5 with a solo victory.

Before the stage began, race organizers announced that 512 coronavirus saliva tests performed on riders and team staff members all came back negative. The next round of tests will be carried out on the second rest day Monday.

Two full teams, Mitchelton-Scott and Jumbo-Visma, withdrew from the race Tuesday following a series of positive results from the first rest day. Overall contenders Simon Yates and Steven Kruijswijk were among those who tested positive and were withdrawn from the race, as well as Australian standout Michael Matthews.

As for the racing, another big test looms for Stage 15 on Sunday in a mountainous 185-kilometer (115-mile) leg from Codroipo to Piancavallo that concludes with a first-category climb.

The Giro was rescheduled from its usual May slot because of the coronavirus pandemic.