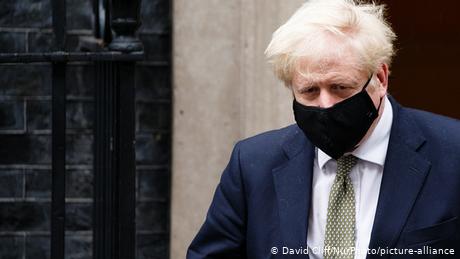 The best way to react to Boris Johnson is to let him stew in his own juice. At the two-day EU summit that ended Friday, French President Emmanuel Macron demonstrated the most elegant way of dealing with Johnson's bluster, his ultimatums and his threats when he said that it was not the job of the 27 leaders remaining in the EU to make the UK prime minister happy.

Boris Johnson has been complaining that the EU has not compromised sufficiently during negotiations on a post-Brexit trade deal and is refusing to give the British what they want. As a result, he said the country would possibly have to prepare for a hard Brexit, a no-deal departure from the EU that would bring the transition period to an abrupt end at the end of the year.

Read more: Brexit too much to stomach for German sausage chain

Angela Merkel also gave her own cool, understated response to the most recent act of political theater being performed in London. She said the EU was ready to continue negotiations. The meeting in Brussels ended with the leaders giving the EU's chief negotiator, Michel Barnier, a mandate to get back to work.

By Monday it will become clear whether Barnier will actually find anyone willing to engage in further talks in London, or whether the UK government really intends to pull the plug.

That is possible, but not necessarily probable. Johnson's behavior reeks of playacting, a swaggering display to win over a home crowd. But there he can only impress those people already determined to believe their own propaganda. But that, unfortunately, lies at the heart of populism. It is a show for those Britons who are completely devoid of irony and blessed with very short memories.

During the election campaign just last year, Johnson kept on boasting that the trade deal with the EU was "oven-ready — like a dish you would put in the microwave. He has also said that the chances of leaving the EU without a deal were less than a "million to one." Taking on more serious tones during a visit to Dublin, Boris Johnson declared that a no-deal Brexit would be "a failure of statecraft." But not even his supporters, surely, still take him for a statesman.

What is happening on the other side of the Channel is a sorry sight, indeed. The country is governed by a politician whose political program consists of vacuous slogans. Boris Johnson very recently insisted that the UK could "prosper mightily" even in the event of a no-deal Brexit.

That is the same prime minister whose indecisiveness and U-turns have led to the UK having the highest coronavirus death toll in Europe. This is the same leader who failed to better equip the hospitals during the summer, or to improve the country's failing test-and-trace system — and one who has thus helped push the economy into a historic recession.

Admittedly, Johnson is not the only politician in Europe going through a bad crisis. But he is the only one who is planning to burden his citizens with another, worse crisis to add to the economic one caused by the coronavirus pandemic — the crisis of a hard Brexit.

British business leaders have been appealing to the prime minister on an almost daily basis to desist from this act of madness. But Johnson has obviously become a champion of chaos theory. He is willing to risk the destruction of his country, if it means that he can portray himself as the strong man, a diehard Brexiteer or as the number one populist.

Read more: Opinion: Is the UK turning into a rogue state?

Perhaps all the theatrics in London are just part of a negotiation drama that requires Act Three to be full of commotion and shooting so that necessary and reasonable compromises can be agreed in the final moments before the curtain falls. But the British prime minister is unpredictable. It could all go horribly wrong. And Johnson's remarks that the EU had refused to negotiate seriously are just embarrassingly provocative.

The EU would be wise to avoid stooping to this level. It cannot give the UK the same access to markets as EU member states. Of course, things won't be as good as they were before. And legal restrictions will also inevitably be part and parcel of the deal — just as with all other trade agreements.

There are only two options left: Boris Johnson makes another U-turn and signs a deal in two weeks' time. Or he adopts a hard course and accepts the consequences — from rising food prices to endless lines of trucks queuing at the ferry port in Dover. Then the Europeans will just have to accept that they have to let go, to accept that they are unable to make the UK government happy — at least not at all costs.