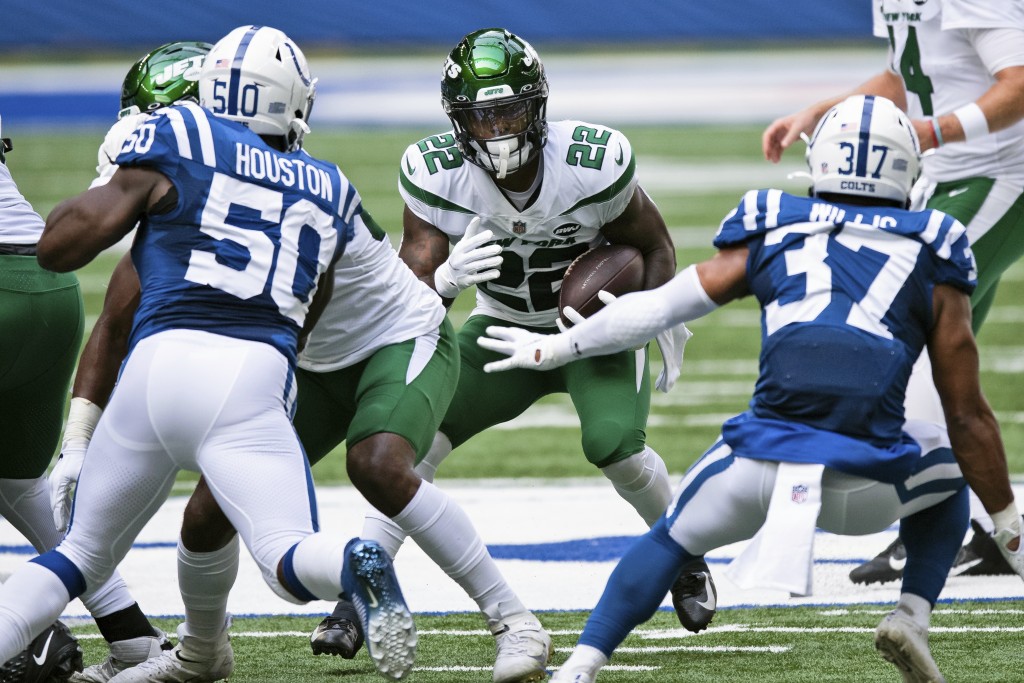 NEW YORK (AP) — La'Mical Perine was drafted in April to be the New York Jets' running back of the future.

Well, that might be right now. And a bit sooner than many probably expected.

“I’m excited,” Perine said this week. “I’m not going to sit here and lie like I’m not excited. I don't want to get too excited. ... I just want to keep my composure and be able to go out there and focus and play hard.”

The Jets' jammed-up backfield got a little less crowded Tuesday night when Le'Veon Bell was released after a disappointing stint that lasted just 19 months. So, New York now has Perine, a fourth-round pick out of Florida; 37-year-old Frank Gore; and Ty Johnson on the active roster, with Josh Adams also on the practice squad.

But, the carries might start to shift more toward Perine when the 0-5 Jets take on the AFC East-rival Dolphins in Miami on Sunday.

"But getting Perine really involved is going to be critical for us.”

Perine hasn't been much of a factor yet. He saw no snaps on offense against Arizona last Sunday, and has just 15 carries for 56 yards and two catches for minus-1 yard through five games.

Gase also acknowledged as recently as Monday — a day before the move with Bell — that the Jets didn't “want to put too much on his plate too fast and kind of really stunt his growth at all.” Whether they truly believe Perine is suddenly ready now or it's just by necessity, the Jets are handing off a big chance to the 22-year-old running back.

“I’m here for a reason,” Perine said. “I always tell myself that.”

When the Jets drafted him, Gase and general manager Joe Douglas raved about Perine's speed and versatility out of the backfield. He was an exciting prospect whose 2,485 yards rushing rank eighth in Gators history. Perine also had 22 TD runs, and caught 72 passes for 674 yards and eight scores.

“I think he’s a guy that can play on all three downs,” offensive coordinator Dowell Loggains said. “It’s going to be the first time that he’s had a different role, but he has good hands, he has good speed and he can help us in the pass game and the run game.”

Perine had some impressive days during training camp, but sprained his left ankle during the team's scrimmage at MetLife Stadium on Aug. 30. He was inactive for the regular-season opener, and then saw limited action during the next four games as Bell, Gore, Adams and the since-released Kalen Ballage handled the backfield duties.

“Once we got him back, then we started creating some stuff for him,” the coach said. “We didn’t always get to it, but I feel like he’s in a good spot. I feel like we know how to use him. And his skill set, there’s a lot of things he can do. There’s an explosiveness there where we’ve seen him take it to the house from 80 yards and that speed is real.”

With the Jets' offense ranking last or nearly last in the NFL in several categories, Perine might be able to provide a spark in what has been a dim start to the season.

“He doesn’t say a whole bunch,” Gase said. “He’s fairly quiet. He’s in Frank’s hip pocket all the time, has been really since the beginning. I think he’s just he’s looking at it as he loves the opportunity.”

Perine said he used the last few months to learn from Bell, who was one of his favorite players growing up, and Gore, who has bonded with the youngster over them both not being high draft picks. Gore was a third-rounder in 2005 — when Perine was 7 — and worked his way to becoming the third-leading rusher in NFL history.

“I told him how I felt when I got drafted and I told him that’s how he should look at it,” Gore said. “I always say the guys who went in the first round, they’re going to get the first opportunity, a better opportunity than you. But once you get your opportunity, you have to take advantage of it.”

That's exactly what Perine, the 11th running back taken in April, intends to do. Maybe starting Sunday in Miami.

“Just keep on working like I’ve been doing,” he said. “That’s what got me here. That’s what got me to the Jets. Just keep grinding, keep studying the plays and the playbook and just doing everything to give me the best opportunity to perform on Sunday.”