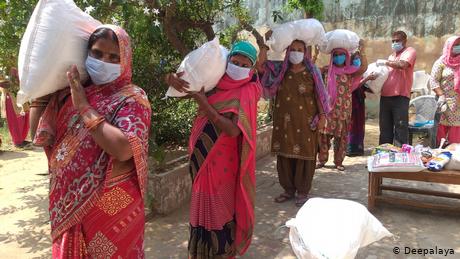 "The food stress existed long before the start of the pandemic. It has now become worse. Many people have lost their jobs, and those with low incomes complain about food insecurity," Dipa Sinha of the Right to Food Program told DW.

India ranked 102 out of 117 countries in the 2019 Global Hunger Index – below Pakistan and Nepal in South Asia – with the hunger level in the country categorized as "serious." The ranking was based on three major indicators – stunted growth among children, child mortality rate, and the proportion of undernourished people in a country.

Prime Minister Narendra Modi's government imposed a lockdown in March to contain the coronavirus spread. The pandemic has so far killed over 112,000 people and infected over 7 million in India.

According to activists that are tracking coronavirus-related fatalities, over 300 people have lost their lives because of starvation, exhaustion, and accidents. The suicide rate is also on the rise in the country.

The initial lockdown forced millions of migrant workers to leave cities and return to their villages. Many of these laborers have returned to cities only to face an uncertain economic situation. There are limited employment opportunities during the pandemic, which has pushed millions of people across the country into extreme poverty.

A recent COVID-19 Livelihoods Survey conducted by the Azim Premji University revealed that hundreds of thousands of families in India have been forced to reduce their food consumption during the pandemic.

"Food is scare in many states, with millions of people unable to make ends meet," Jean Dreze, a development economist, told DW.

Read more: Coronavirus: Why hand-washing is a luxury for most Indians

The government has launched a One Nation One Ration Card (ONOR) scheme across the country to deal with the hunger problem, but activists say the government's efforts have failed to improve the situation.

Experts say the hunger crisis is not due to the shortage of food production; surplus food items have been lying in the stores of the Food Corporation of India.

"Stocked food items must now be used to provide relief to millions of Indians," Himanshu Himanshu, an associate professor at New Delhi's Jawaharlal Nehru University, told DW, adding that by they will not only help reduce the food surplus but also boost India's economy by increasing the disposal income of households that are struggling due to the pandemic.

But coronavirus restrictions have disrupted the transportation system across India. According to an Oxfam report, entitled "The Hunger Virus," traders are unable to reach rural communities during the peak of the harvest season, which has affected the food supply chain and the incomes of at least 100 million people.

"Women, and women-headed households, are more likely to go hungry despite the crucial role they play as food producers and workers," it added.

According to the Right to Food Program's Sinha, the government needs to step up its efforts to overcome the food shortage crisis. "What India needs is a universal Public Distribution System (PDS) of food to ensure that nobody goes hungry during the pandemic," he said.