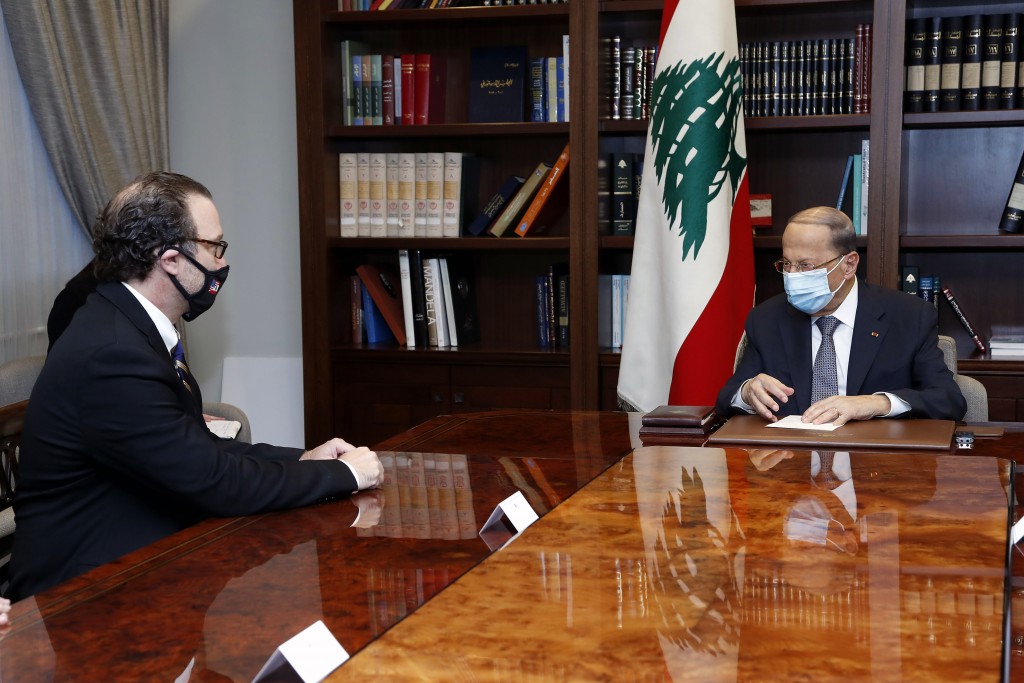 BEIRUT (AP) — Lebanon's President Michel Aoun told a visiting U.S. official Friday that his country “heavily relies” on Washington’s mediation regarding a disputed maritime border with Israel, and hopes the United States can help the sides overcome difficulties they may face.

Aoun’s comments were released by his office following his meeting with U.S. Assistant Secretary of State for Near Eastern Affairs David Schenker, the top American diplomat for the Middle East. The statement by Aoun’s office quoted Schenker as saying that he hopes the negotiations will be completed as soon as possible and reach positive results.

On Wednesday, Schenker attended the opening session of U.S.-mediated talks between Lebanon and Israel at a U.N. compound in the border area known as Ras Naqoura.

Israel and Lebanon have no diplomatic relations and are technically in a state of war. They each claim about 860 square kilometers (330 square miles) of the Mediterranean Sea as being within their own exclusive economic zones.

Israel has already developed a natural gas industry elsewhere in its economic waters, and Lebanon hopes oil and gas discoveries in its territorial waters will help it overcome the worst economic and financial crisis in its modern history.

Lebanon’s economic crisis is the result of decades of corruption and mismanagement, but it has been dramatically worsened by the coronavirus pandemic as well as a massive explosion in Beirut on Aug. 4, which killed and wounded many and caused damage worth billions of dollars.

Lebanese Prime Minister Hassan Diab’s government resigned just days after the blast, and more than two months later Lebanon is still without a Cabinet because of political bickering between rival groups.

Aoun told Schenker that work was ongoing for the formation of “a clean government which focuses on achieving necessary reforms.”

The international community has said it will not help Lebanon get out of its economic crisis before it implements major reforms, on top of fighting corruption.