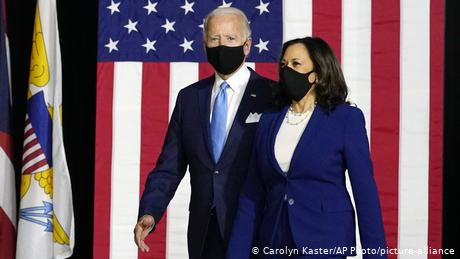 Kamala Harris made history this year when she was picked as the US Democratic Party's vice-presidential nominee. She became the first Black woman and the first Asian-American on a major party ticket. But her nomination also sparked a frenzy on the other side of the globe.

Many across India were thrilled by the prospect of an Indian-origin woman occupying the second-highest political office in the US. This was seen days after the announcement was made in mid-August when banners and placards of Harris popped up across the southern city of Chennai, the hometown of Harris' mother, Shyamala Gopalan.

Indians from all walks of life, including politicians and billionaire businessmen, shared the excitement of the Indian-American community.

Besides stoking national pride, Harris' nomination also sparked speculation in the Indian media over what it could mean for US-India relations, which have significantly improved over the past couple of decades.

But some experts warn against setting high expectations.

"While the Indian-American community may see a point to celebrate, I would not say [a Harris victory] would mean concessions to the India-US relationship," said Navtej Sarna, who served as India's ambassador to the US.

Sarna told DW, regardless of who wins in November, "the strategic logic of the India-US relationship is very strong."

During the Cold War years, India had forged strong defense ties with the Soviet Union despite New Delhi's "non-alignment" strategy. This often came at the expense of its relationship with Washington.

But ties between New Delhi and Washington have significantly advanced since the 1990s, with the most notable milestone being the 2005 US-India civil nuclear deal.

Under Donald Trump's presidency, the strategic partnership between India and the US has deepened even as America's relations with its traditional allies have come under strain.

Trump and Prime Minister Narendra Modi have also put their strong personal relationship on public display, by even holding two joint rallies, one in the US and another in India.

The two countries came close to signing a trade agreement earlier this year, but negotiations have since stalled, partly due to the coronavirus pandemic.

These developments are likely to continue post-election, albeit with nuanced changes in case there is a new administration.

"The first imperative of a new administration would be to revisit questions around multilateralism, and America's engagement with its allies. That would be a priority," said Rudra Chaudhuri, director of Carnegie India, adding that there would be an expectation to reach out to India as part of that effort.

"As far as the economy, business and defense are concerned, a new administration will likely continue efforts to strengthen cooperation in these areas, and even double down," he told DW.

One of the things that has characterized Trump's presidency was his administration's willingness to overlook human rights issues, and to work closely with authoritarian regimes.

Trump has often sidestepped questions on India's crackdown in Kashmir and, unlike his predecessor, ignored the issue of declining religious freedom in the South Asian country.

While the US president was attending gala events on his visit to India in February, religious violence broke out in the national capital, leaving over 50 people dead.

Trump's silence on the violence in Delhi was slammed back home as a "failure of leadership" by his Democratic rivals.

On the other hand, in a recent policy paper, Joe Biden has expressed disappointment with the Indian government over its new citizenship law and called for the restoration of the rights of all Kashmiris.

While Kamala Harris has not taken a definitive stand on either of those issues, during the presidential campaign she has established herself as a defender of human rights.

G. Balachandran, Kamala Harris' uncle and a New-Delhi based academic, is confident that she would not let her Indian heritage keep her from taking a tough stand against human rights abuses in the country.

"Kamala won't withhold what she feels is not right with certain human rights issues in India, just because her mother was Indian," he told DW.

Balachandran added that despite concerns voiced over the human rights issues, most US lawmakers still have a reasonable amount of faith in the Indian judiciary.

In the last four years of the Trump presidency, India-US ties haven't been entirely smooth sailing. Trade has been one of the major sticking points between the two countries.

The US president has repeatedly criticized India over its high tariffs. During his term, Trump announced multiple measures to counter what he considers an unfair trade relationship.

In June 2019, he ended India's preferential trade status, a scheme which allowed some Indian goods to enter the US duty-free.

But analysts in India expect an early resolution and even a limited trade deal after the election.

This optimism stems from the belief that countries, in general, will take a more cooperative approach during and after the pandemic.

"The world has changed, and the way we collaborate with partners will also change," said Dilip Chenoy, secretary-general of the Federation of Indian Chambers of Commerce and Industry (FICCI).

"The strategic interests of the US and India will lead to a new paradigm irrespective of the administration," Chenoy told DW. "The intensity of working together and making specific agreements will accelerate after the election."

Immigration has been another contentious issue with Trump.

Chintamani Mahapatra, an expert on India-US relations, believes a new administration could reverse some of the new restrictions that have been imposed over the past four years.

"A Biden administration will have to modify the immigration policy of the Trump administration to deal with the economic requirements of the post-pandemic era," Mahapatra, a professor of American Studies at New Delhi's Jawaharlal Nehru University, told DW.

Experts argue that this would accrue benefits not only to H-1B visa holders, more than 70% of whom are Indians, but also to US corporations, as it allows them to remain competitive in the global market.

"Once again, the whole discourse has been impacted by COVID-19," Chenoy said, adding that we might see numbers in some immigration categories go up. "But to be able to judge that at this point is very difficult," he said.