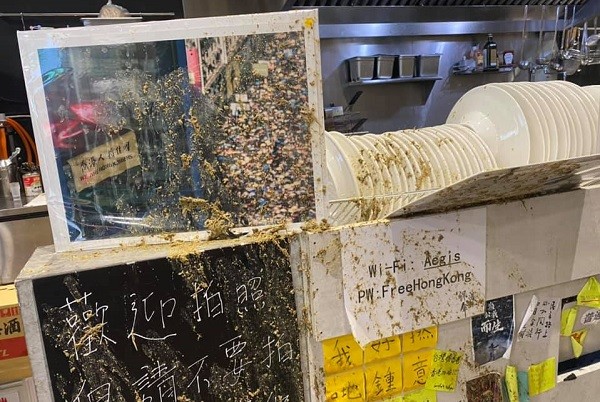 TAIPEI (Taiwan News) — A Taipei restaurant founded to provide employment to Hongkongers was defaced Friday afternoon (Oct. 16) by a masked person armed with a bucket of excrement.

At around 12 p.m., a masked individual entered the Hong Kong protest-themed restaurant Aegis (保護傘) and made a beeline for the kitchen. Staff told Apple Daily that before they could react, the intruder emptied the bucket's contents, splattering the interior and on-duty manager with what seemed to be chicken feces.

Witnesses said they believe the individual was most likely a man, according to the report. The restaurant stated that its losses were considerable and the cutlery would have to be discarded.

The eatery has filed a report with district police, and it announced on Facebook it would close for the rest of the day and Saturday (Oct. 17). As of Friday evening, the staff were fully engaged in the clean-up and unable to give an interview.

The incident was the latest in a series of attacks on Hongkongers in the city.

In April, three men with alleged pro-Beijing sympathies ambushed Hong Kong bookseller Lam Wing-kee (林榮基) with paint just days before the opening of his bookstore. The shop was modeled after one he ran in Hong Kong that sold books critical of the Chinese Communist Party (CCP).

In October of last year, Hong Kong singer and activist Denise Ho (何韻詩) was similarly doused with paint by the chairman of the pro-unification Chinese Unity Promotion Party as she spoke to the press at an anti-CCP rally.