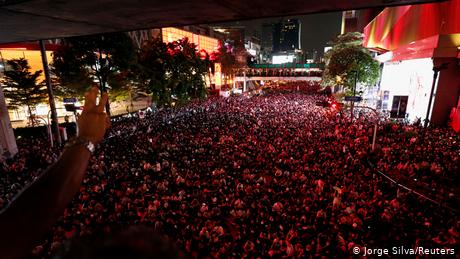 Thousands of protesters took to the streets in Thailand on Thursday in a defiance of a crackdown on pro-democracy demonstrations.

Authorities had announced a decree banning protests, but as many as 10,000 demonstrators gathered in the capital, Bangkok.

The protesters cheered and chanted, dispersing peacefully long after a 6 p.m. curfew had expired.

"I'm not afraid. Emergency or not. I have no freedom," said 26-year-old illustrator Thanatpohn Dejkunchorn, who left work early to attend the protest with friends. "I want freedom to exist in this country. I want it to be free from this vicious cycle."

They called for jailed rights activists to be released; police have been rounding up leading opposition figures taking part in the demonstrations. As many as 40 of them have been arrested over the past week.

The government announced the emergency measures on Thursday morning, which gave riot police the power to disperse hundreds of protesters who camped overnight outside the prime minister's office.

Since July, the youth-led protest movement has been pushing for an overhaul of the government, a new constitution and an end to harassment of government critics.

Their initial demands focused on calling for the resignation of Prime Minister Prayuth Chan-ocha, a former army chief who seized power in a 2014 coup.

He was returned as premier in controversial elections last year. Activists say he manipulated the vote to ensure the military stayed in control — a charge he denies.

But now the protest movement has expanded its aims to seek limits on the powers of the king.

The calls for royal reforms are particularly sensitive in Thailand. Criticism of the monarchy is punishable by long prison sentences.

The latest demonstrations are the first to take place while King Maha Vajiralongkorn is in Thailand.

The Thai monarch spends most of his time abroad, with a significant part of it in Germany.

Officials at the Royal Palace have declined all comment on the protesters or their demands.

"The measures were necessary to ensure peace and order," government spokesman Anucha Burapachaisri said in a statement.