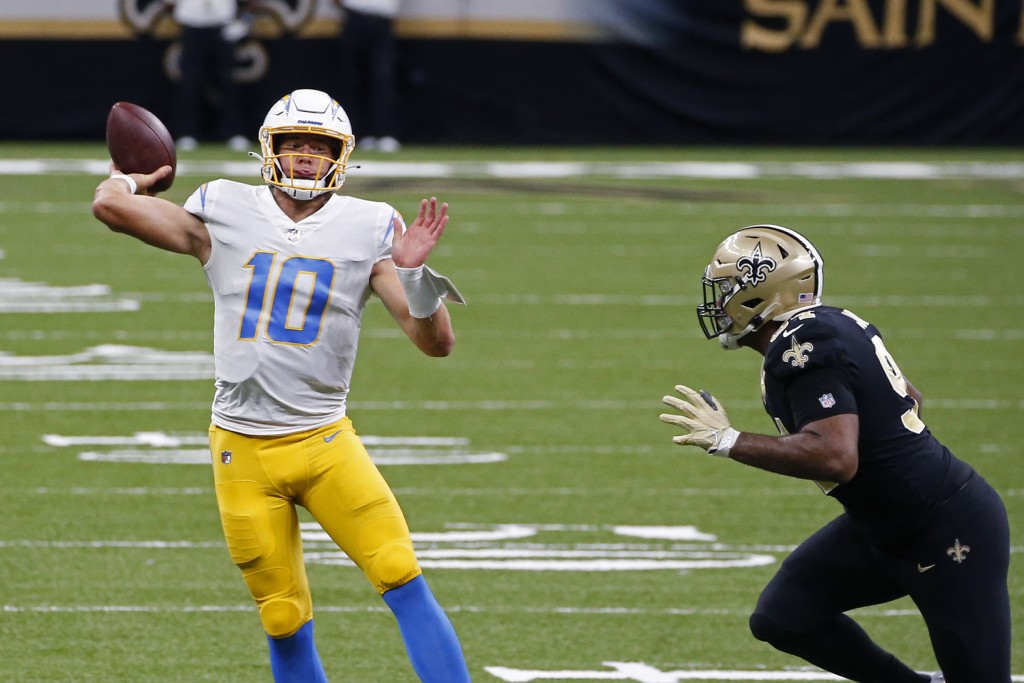 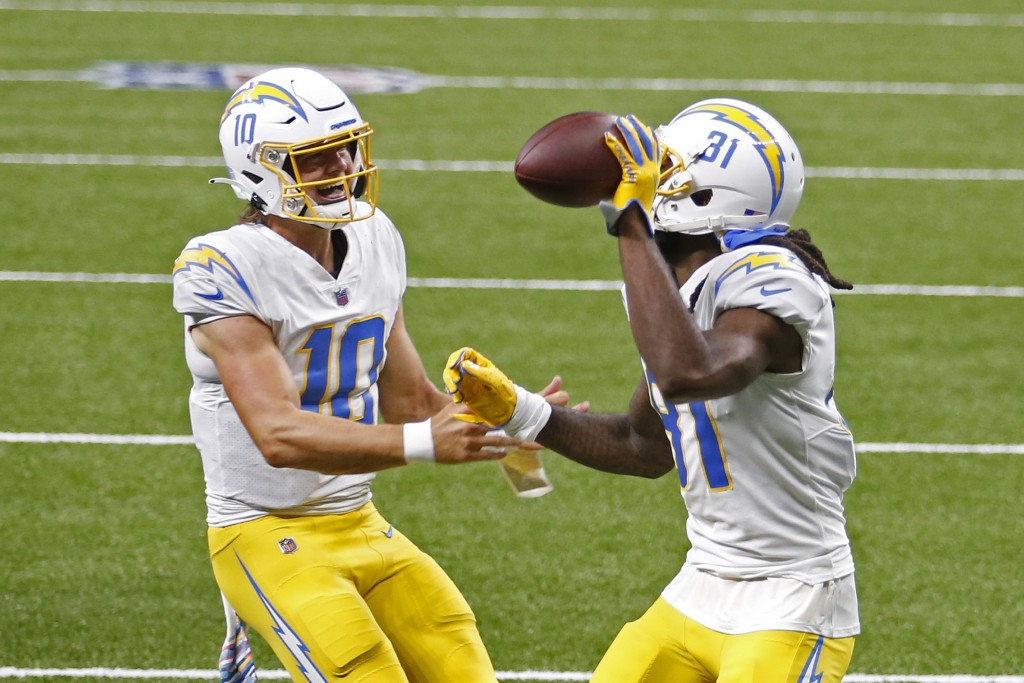 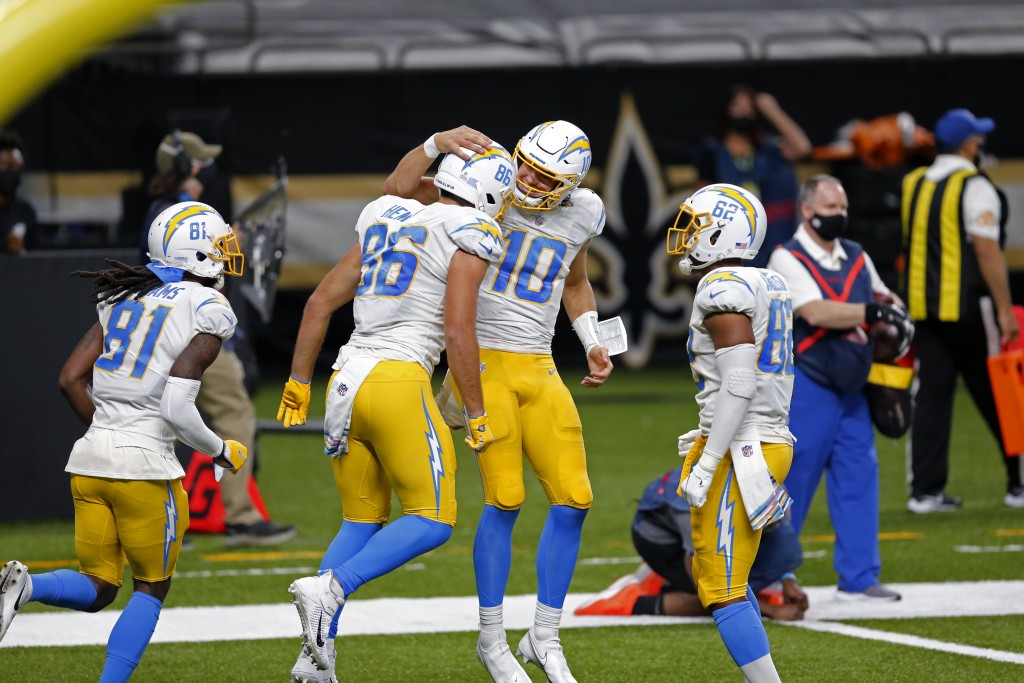 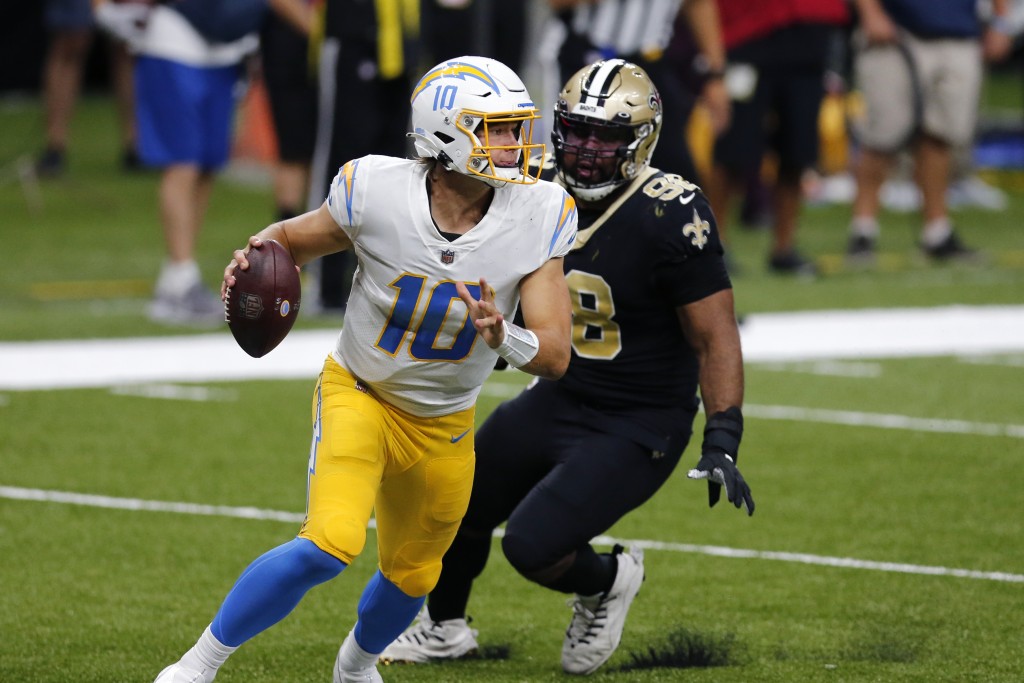 COSTA MESA, Calif. (AP) — Justin Herbert has accomplished plenty during his first four NFL starts. But he still hasn't done the one thing that ultimately defines quarterbacks — lead his team to victory.

The Los Angeles Chargers rookie has a 68.8% completion rate and 107.1 passer rating, which are the highest since the merger for a rookie QB with a minimum of 100 attempts.

Statistically, he has held his own with former MVPs Patrick Mahomes, Tom Brady and Drew Brees on the opposite sideline in three games, only to see them lead comebacks from double-digit deficits.

With Los Angeles' bye moved to this week, Herbert — the Chargers' first rookie starting QB in 22 years — is hoping to rest up while reviewing past games.

“It's a good time for almost all of our guys to get their bodies back,” he said.

Coach Anthony Lynn was hoping Tyrod Taylor could serve as the bridge quarterback while Herbert developed, but Herbert quickly asserted himself when he got the chance to start. Taylor was sidelined when a botched injection caused him to suffer a punctured lung before the Sept. 20 game against Kansas City.

Lynn said last week that Herbert would remain the starter when Taylor returned. Taylor has resumed practicing but remains inactive. Lynn said he has noticed more confidence from Herbert now that he knows the job is his.

“He’s not looking over his shoulder. I think he is more vocal and he’s the quarterback he has to be,” Lynn said. “In time, that leadership and all that will come, but I like I like what he’s doing right now.”

Herbert is no stranger to making a quick impact, even if his team struggles. As a freshman at Oregon in 2016, he tied the school's single-game record for touchdown passes (six) and then set the Ducks mark for total offense (512) in his third. Oregon, though, was 2-5 in games Herbert started.

So far with the Chargers, he has become the first player in 64 years to rush and pass for a touchdown in the first half of his first start and is the first rookie to pass for four TD's in a Monday night game. Los Angeles, though, has lost four straight and is off to its second 1-4 start in Lynn's four seasons.

Turnovers played a major role in the first three losses. Herbert had an interception late in the third quarter against Kansas City that the Chiefs converted into a tying touchdown before they won 23-20 in overtime.

Herbert had a fumble and interception during the first half against Carolina that led to 10 points in a 21-16 loss. Against Tampa Bay, a botched handoff late in the first half allowed the Bucs to score a TD before halftime and gave them momentum that resulted in a 38-31 victory.

Herbert has dealt with numerous lineup changes due to injuries. Right tackle Bryan Bulaga has missed the past two weeks due to back issues and right guard Trai Turner has played in only one game because of a groin injury. Running back Austin Ekeler, who led the AFC in scrimmage yards through the first three weeks, suffered a hamstring strain Oct. 4 at Tampa Bay and is on injured reserve.

Wide receivers Keenan Allen and Mike Williams have also missed time. Allen played only one quarter against New Orleans before experiencing back spasms and Williams was out for the Tampa Bay game.

“He's been solid and very aggressive. The moment is not too big for him,” Fox Sports analyst Michael Vick said of Herbert. “What I really like is when I see a rookie who is not afraid to play like a fourth- or fifth-year player. If you turn on the TV, you wouldn't know that Justin is a rookie.”

Herbert has shown poise when facing blitzing defenses. He is 22 of 32 for 353 yards with four touchdowns and a 144.9 rating against the blitz. The only rookie to have a better rating over his first four starts since 2007 was Washington's Robert Griffin III in 2012 (155.8).

“I think footwork has been huge, along with being able to pick up on the five- and seven-step drops along with play-action stuff,” Herbert said. “I’m just trying to have fun. Just go out there, play and relax.”

The rescheduled bye week comes at a good time for the Chargers, who are reeling with injuries on both sides of the ball. The defense was down to third string on the defensive line during overtime against the Saints along with being down three starters in the secondary and two at linebacker.

And for a team that didn't have a player opt out due to the coronavirus and hasn't had someone test positive during the season, the Chargers had their schedule disrupted the most.

Five of their next six weeks were rescheduled by the NFL with the bye moving to this week from mid-November. Even with the switches, Los Angeles will have a favorable stretch with four of its next five opponents under .500, beginning on Oct. 25 against Jacksonville.

“We just know that there's going to be change. Just the way it is,” Lynn said.