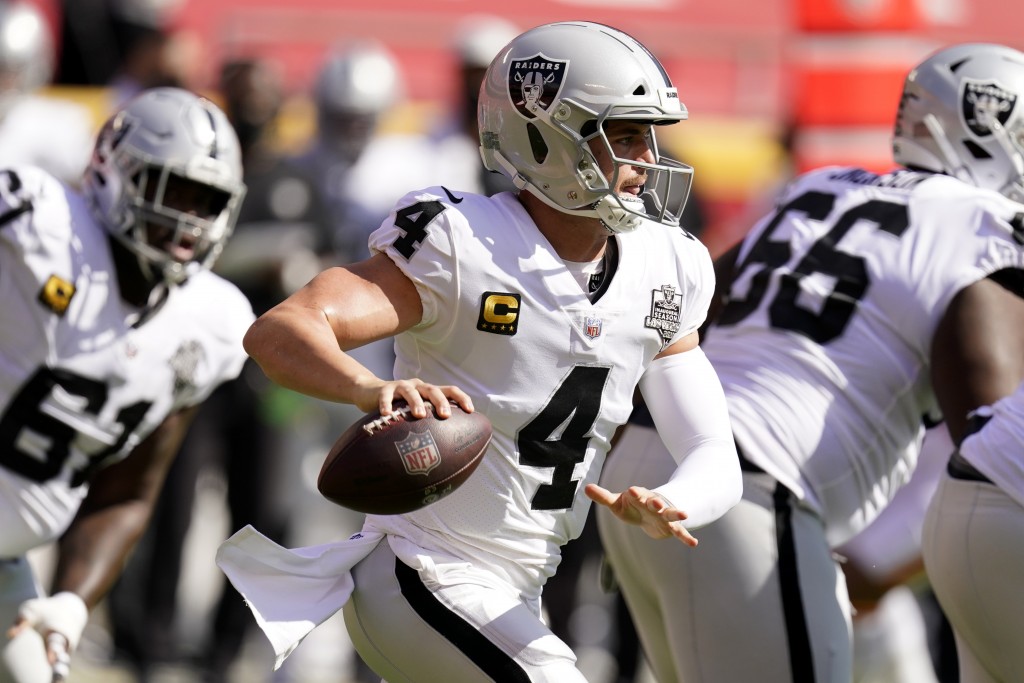 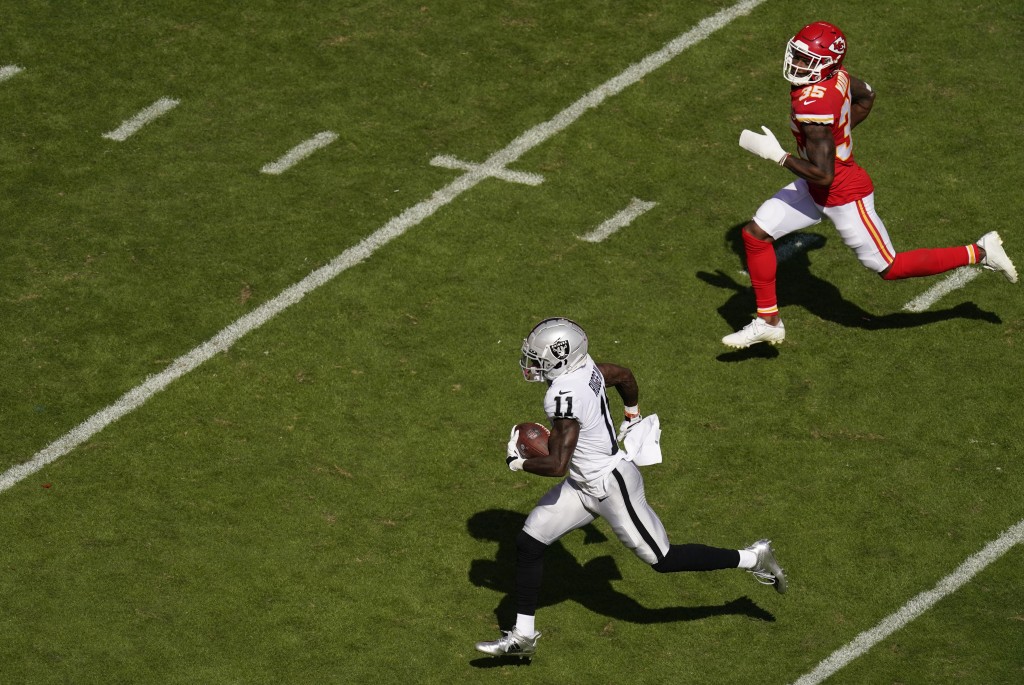 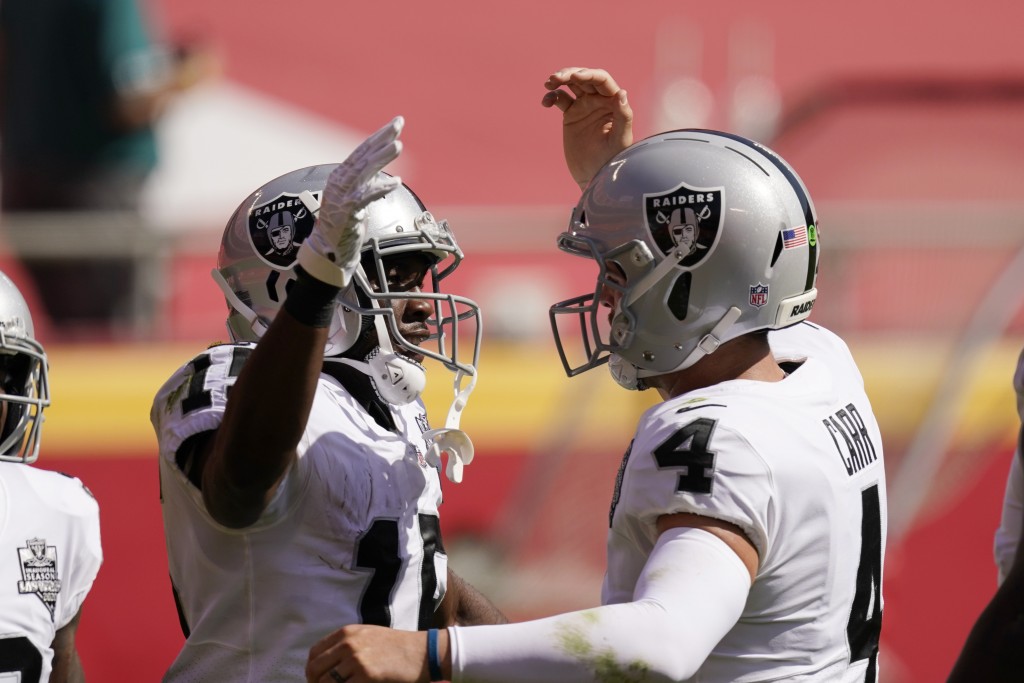 Derek Carr dropped back and unleashed a deep strike that Nelson Agholor caught for a touchdown. Two drives later, Carr did it again when Henry Ruggs III got behind the Kansas City defense and brought in another pass for a touchdown.

The quarterback who has been criticized for too often settling for checkdowns is finally showing the aggressiveness the Raiders hoped he would after they drafted the speedy Ruggs.

The performance Carr delivered against the defending champion Chiefs might have even made the difficult-to-please late owner Al Davis smile if he could have seen it.

It was also a sign that the Raiders (3-2) might have an offense that can keep up with the more dynamic teams in the league as they head into their bye week seventh in the NFL in scoring at 30.2 points per game.

It’s only fitting the “vertical game” is a big part of the turnaround considering that Davis once called that his No. 1 philosophy when it came to building a team.

“We were going to stretch the field vertically,” he once told NFL Films. “When we came out of the huddle, we weren’t looking for first downs, we didn’t want to move the chains, we wanted touchdowns. We wanted the big play, the quick strike.”

While Carr has shown flashes of this during his career, he never was willing to go deep consistently — to the frustration of Raiders fans who remember the glory days when the Mad Bomber Daryle Lamonica and Ken Stabler were connecting on deep passes to speedsters Warren Wells and Cliff Branch.

His average depth of throw was the lowest in the NFL from 2018-19 as the Raiders ranked near the bottom in the league in scoring thanks in part to a lack of big plays.

That has begun to change thanks to the addition of Ruggs, who was drafted 12th overall after running the 40-yard dash in an impressive 4.27 seconds at the combine.

Coach Jon Gruden didn’t wait long to show off his speedy new toy when he called for a deep shot on the second play of the season. Carr was unable to connect with Ruggs on that one in Carolina but did hit the rookie for a 45-yard pass that set up the team’s first TD of the season.

“We did not bring him in here to run hitch routes,” Gruden said.

Ruggs got hurt later in the first half of that game. He and Carr were unable to connect on many more deep passes the first two weeks. Ruggs then missed two losses to New England and Buffalo before making an impressive return against the Chiefs.

He caught a 46-yard pass to set up a field goal and a 72-yarder that went for a touchdown as the Raiders showed they have the same kind of dynamic threat that Kansas City has tormented them with in recent years with Tyreek Hill.

Ruggs has just six catches this season but they have gone for 177 yards; he is the only player in the league with three receptions of at least 40 yards.

But his impact runs far deeper than just on the plays when he gets the ball. Defenses are forced to respect his speed, which opens up underneath routes for tight end Darren Waller and slot receiver Hunter Renfrow, as well as running lanes for Josh Jacobs.

The Raiders gained 2.2 more yards per pass when Ruggs is on the field than when he isn’t, according to SportsInfo Solutions.

“When you’re really healthy, the full offense is open. We can do everything that we want to do,” Carr said. “Many times we’ve had injuries and stuff where teams will sit at 10 yards and make us try to get a running back open on stuff. I know people get frustrated with it, but we try and do our best in those moments."

After looking like one of the top young quarterbacks in the league in 2016, Carr has been unable to find that form again. The Raiders were one of three teams that scored fewer than 20 points per game in each of the last three seasons as Carr too often played conservatively and got little help from his receivers on a depleted roster.

Gruden traded away Amari Cooper. Antonio Brown was cut before playing a game after he spent months sabotaging the franchise. No one else emerged as a deep threat.

That led Carr to keep throwing short instead of taking chances. But the Raiders are making a concerted effort to go deep early to test the defense and open things for later, with Carr ranking 11th in average depth of throw in the first half.

His average throw went 9.2 yards downfield last week against the Chiefs, which was nearly 2 yards more than he had in any of the first four games, according to NetGen stats. He connected on 4 of his 6 deep throws for 219 yards and two TDs and matched a career-best with three completions that went at least 35 yards downfield.

That has helped Carr rank third in the NFL with a 115.9 rating through five weeks, with 11 TD passes and one interception.

“I just think he is a really good player honestly,” Gruden said. “I have been saying it. We are getting better around him."