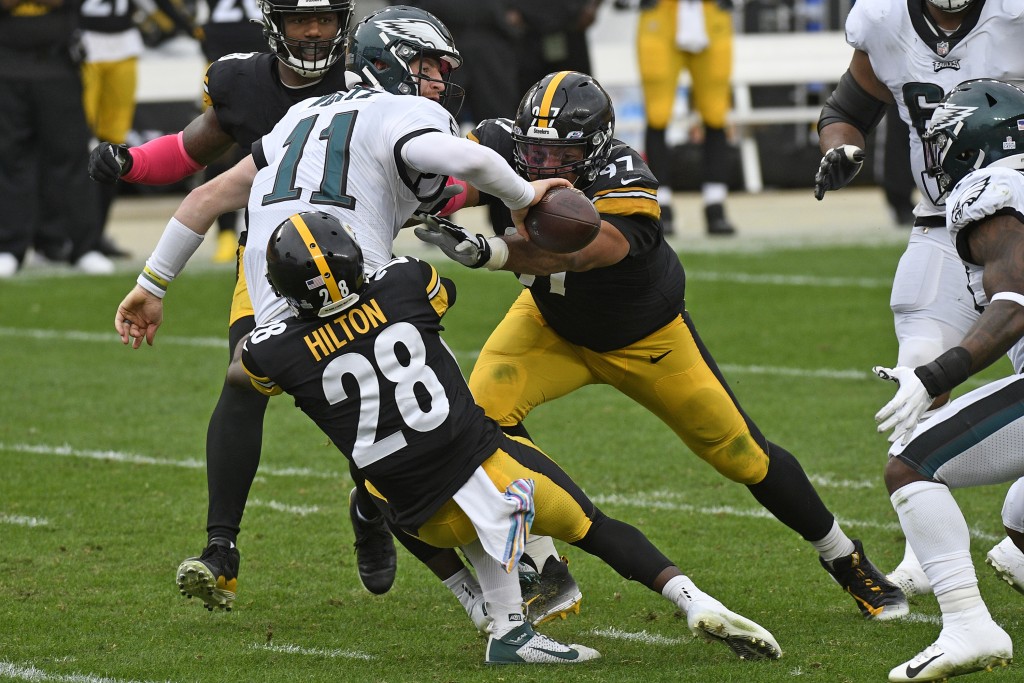 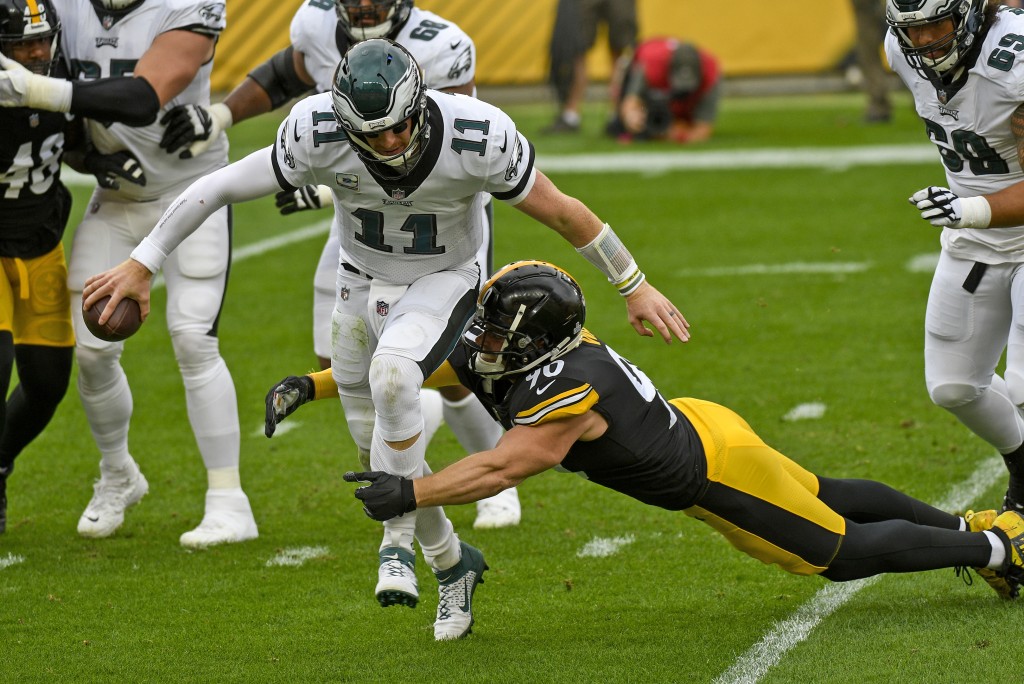 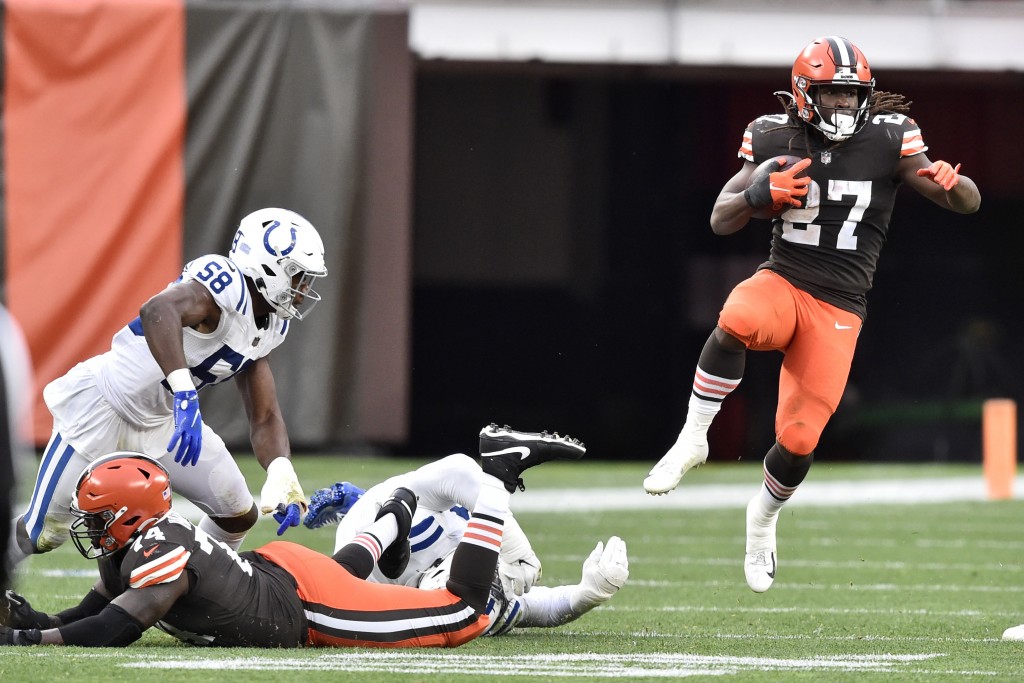 PITTSBURGH (AP) — Mike Tomlin has seen this before. The dynamic playmakers. The physical offensive line. The commitment to the run that simultaneously protects leads and wears down opponents.

The longtime Pittsburgh Steelers coach got an up-close look back in 2006 when he was the defensive coordinator in Minnesota and current Browns coach Kevin Stefanski was an assistant to then-Vikings coach Brad Childress.

The Vikings finished 6-10 that season, but Chester Taylor piled up a career-high 1,216 yards. Adrian Peterson arrived in the draft the following April, and as Stefanski quietly rose through the organization's coaching ranks, Minnesota's ability to run the ball rarely wavered.

It's much the same in Cleveland, where Stefanski has the Browns rolling — yes, really — heading into Sunday's visit to Heinz Field. Cleveland (4-1) has done it behind running backs Nick Chubb and Kareem Hunt, with the occasional pitch to wide receiver Odell Beckham Jr. thrown in for good measure.

So while the Steelers (4-0) have put together the league's second-ranked run defense during their best start since 1979 — a stretch in which they shut down New York Giants star Saquon Barkley and Houston's David Johnson among others — Tomlin is well aware the challenge will be considerably tougher when the Browns make their annual 2-hour trip to Pittsburgh with the NFL's top rushing offense in tow.

“They have quality players. They have quality schematics,” Tomlin said. “Kevin Stefanski has been around solid run games all of his career. He spent a lot of time up in Minnesota during the Adrian Peterson years and even after. The Minnesota Vikings have always been a group that is capable of running the ball. There is a commitment there.”

And in Pittsburgh, there's a commitment to stopping it. Only Tampa Bay is allowing fewer rushing yards per game and per attempt than the Steelers, who have been stout against the run while also maintaining one of the league's best pass rushes.

On the surface, the concepts would seem at odds. Yet Pittsburgh has managed to drop running backs and quarterbacks with equal aplomb. The Steelers are tied for the NFL lead in sacks (20) and have recorded at least one sack in 61 straight games, the fourth-longest streak in NFL history.

“Sometimes when you look at these pass-rushing teams, they tend to get upfield and expose themselves in the run game that expose vertical holes,” Pittsburgh defensive tackle Cam Heyward said. “We have a great group of guys that know how to get off the blocks.”

The Browns, meanwhile, have a group of guys that know how to deliver them. Cleveland is tops in the league in yards per rushing attempt no matter who is in the backfield while also doing a solid job of protecting Mayfield. Though the former Heisman Trophy winner is dealing with a rib issue that's limited him in practice this week, he's only been sacked seven times.

And while Chubb will miss his second straight game with a sprained right knee, Hunt carried it 20 times in last week's win over Indianapolis, his highest single-game total in two years.

“The strength of their pack is in the pack,” Tomlin said. “They’ve got quality depth throughout all positional groups.”

So do the Steelers, though the defense looked vulnerable at times against Philadelphia, particularly on third down. The Eagles — missing their top two wide receivers — converted 10 straight third downs to nearly rally from a 17-point deficit, three of them coming on 3rd-and-10 or more.

“Sometimes the offense is going to win on that but not like they’ve been doing," Butler said. “We gave up way too many in terms of percentages, getting the ball and getting to the quarterback a little bit. We didn’t. We blitzed a little bit but not a lot. ... If we do a little better of a job of coaching in terms of a disguise and stuff like that, I think it would help our guys out a little bit.”

NOTES: Pro Bowl G David DeCastro missed a second straight practice on Thursday with an abdominal injury. Rookie Kevin Dotson will fill in if DeCastro can't go. C Maurkice Pouncey (foot) was a full participant after sitting out Wednesday. ... WR Diontae Johnson (back) was limited. ... All other players who were held out Wednesday for various reasons were also full participants.