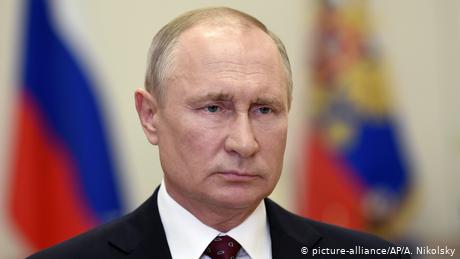 The European Union implemented sanctions on Thursday against six individuals and one organization over the poisoning of Russian opposition leader Alexei Navalny and violations of the UN arms embargo in Libya, the EU announced in a statement.

Envoys from the 27 member states to Brussels agreed on the proposed measures on Monday. France and Germany had both pushed for the response.

Russia vows to respond in kind

"The EU with this step has harmed relations with our country," Kremlin spokesman Dmitry Peskov told reporters, describing the EU's actions as a "consciously unfriendly step" and promising retaliation.

Foreign Minister Sergei Lavrov responded to the sanctions by threatening that Russia would take a similar course of action.

"The Germans are not planning to provide any facts, despite all international and legal obligations. We respond in kind. This is diplomatic practice," he said in an interview on Wednesday.

Many of those targeted by the new measures include members of Russian President Vladmir Putin's inner circle.

One of the individuals who saw sanctions imposed against them was Federal Security Service Director Alexander Bortnikov. The list also included Deputy Chief of Staff in the Presidential Office Sergei Kiriyenko, two deputy defense ministers, and the State Scientific Research Institute for Organic Chemistry and Technology.

The sanctions came into effect immediately. The EU's response proved much quicker than following the poisoning of the former double agent Sergei Skripal and his daughter in the UK in 2018.

Alexei Navalny, fierce critic of Putin, was poisoned on a domestic flight in Siberia on August 20. He was taken to Berlin for treatment where it was determined he had been poisoned with the nerve agent Novichok.

Included on the list was Yevgeniy Prigozhin, known as "Putin's chef" due to his ownership of a company which has done catering for the Kremlin. The EU claimed Prigozhin had "close links, including financially, to the private military company Wagner Group."

The EU said Prigozhin had carried out "multiple and repeated breaches" of the UN arms embargo in Libya. Russia has backed military strongman Khalifa Haftar against the internationally-recognized Libyan government.

"In this way, Prigozhin is engaged in and providing support for Wagner Group's activities in Libya, which threaten the country's peace, stability and security," the EU said. Prigozhin denied the claims and expressed his disappointment in the new sanctions.

"Of course, I am very upset over these sanctions, since I will have to curtail my many business projects in the European Union," Prigozhin said.

"And probably now I will meet less with friends in the European Parliament, many of whom are very decent people who, like me, are supporters of conservative values and fully support me," he added.

The UK joined the EU in implementing sanctions over the Novichok poisoning and interference in Libya.

"The UK will apply sanctions announced by the EU against six individuals and an entity involved in the poisoning and attempted murder of Mr Navalny under the EU's chemical weapons sanctions regime," the foreign ministry said in a statement.