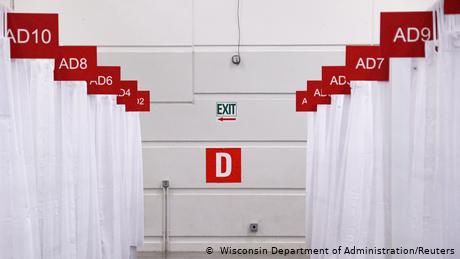 Until recently, the greatest concern of health authorities was to keep the reproduction number, or R-value, for the coronavirus below the critical threshold of 1.

On Tuesday, Germany’s public health agency, the Robert Koch Institute (RKI), said the country’s seven-day R-value was at 1.2. But fewer people are focusing on this indicator than in previous weeks and months.

Lately, many decision-makers and ordinary people seem to be paying more attention to the cumulative number of coronavirus infections and illnesses over a certain time period. This so-called incidence is an indicator of the risk that people will contract the SARS-CoV-2 virus within a certain time frame.

Germany’s seven-day incidence rate shows the number of new coronavirus infections — according to positive PCT and antigen tests — within the past week per 100,000 inhabitants.

If too many individuals become infected, Germany’s regions are urged to impose respective security measures. These may include making masks mandatory everywhere, introducing curfews, banning the sale of alcohol, limiting the number of people allowed to gather in private and at public events, restricting travel and refusing to let tourists from high-risk regions stay in the area's hotels.

What is a sensible threshold?

Most regions and federal states in Germany have determined that 50 new coronavirus infections per 100,000 inhabitants signal a serious danger. The southern state of Bavaria has introduced an early warning system: If 35 or more cases are reported within a certain part of Bavaria, regional public health agencies must inform the state's Health Ministry about the cause of the spike and which countermeasures are being taken.

The latest coronavirus figures in Germany can be viewed on the RKI's website.

The 50-case threshold, which is arbitrary but not completely without foundation, was set in May to define a critical infection rate.

"This is when public health departments become so strained that they can no longer trace every infection to find out who became infected before," Frank Ulrich Montgomery, who heads the World Medical Association (WMA), told public broadcaster Deutschlandfunk. Once this threshold is exceeded, action must be taken, he said. This, he said, is not being alarmist but "a sensible thing to do from a public health perspective."

The RKI also says this 50-case threshold is key. On its website, the agency states that "the absolute number of new infections must be low enough to allow for effective contact tracing to happen and to keep the strain on intensive care units (ICU) manageable."

However, Stefan Willich, who heads the Institute for Social Medicine, Epidemiology and Health Economics at Berlin’s Charite hospital, says the 50-person threshold is out of date. Speaking to public broadcaster RBB Inforadio, Willich said a "sensible reference" was needed to make statistical sense of the coronavirus pandemic. He said the 50-person mark per week per 100,000 inhabitants "seemed like a precise indicator" five months ago, but that in reality, it was little more than a rough indication.

Willich said many more people are now undergoing coronavirus tests than in spring, meaning that the sheer number of tests will increase the likeliness of higher recorded infection rates. Consequently, he said, "we are lacking a proper frame of reference."

Willich recommends basing our assessment of the extent of the pandemic on representative samples. "I think we will come to a different definition over the coming weeks on the basis of new samples and surveys."

The epidemiologist says he is certain that safety measures such as masks, social distancing and contact tracing will have to remain in place for quite a while longer.

"These measures are the pillars of our long-term strategy," says Willich, adding that if we practice them, the pandemic will be manageable. He also says high-risk individuals in retirement and nursing homes, as well as hospitals, must be placed under special protection.

Andreas Gassen, who heads the German National Association of Statutory Health Insurance Physicians, is critical of the 50-person threshold, too. He told the German daily Neue Osnabrücker Zeitung we should stop focusing on this indicator, as it sparks "alarmism." He said that

"Even 10,000 infections per day would not be dramatic, provided only one out of 1,000 people fall gravely ill — which is what we are seeing now," he said.

Gassen's comments came in response to warnings by Robert Koch Institute director Lothar Wieler, who recently said Germany could lose control of the outbreak. Gassen pointed out that in spring this year, Germany recorded some 4,000 new infections and up to 150 deaths per day.

Read more: COVID-19, cold, or flu symptoms: Should I see a doctor?

"That is over, and now we are seeing a single-digit death toll," Gassen said. He said that if this ratio remained stable, Germany could cope even with five-figure infection rates. Gassen does not, therefore, expect the country’s health care system will collapse in autumn and winter.

Frank Ulrich Montgomery of the WMA has disagreed. "It takes between four and six weeks before someone dies from a coronavirus illness," he said. This means, he argued, that recently detected infections only provided a snapshot of the situation a week before. A growing number of cases ending in death were to be expected in ICUs only in four to five weeks' time. "That is why I think it is too early to make such a statement," he said.

Gassen, meanwhile, recommends analyzing which age brackets are becoming infected. "I think we can allow for a sense of normality to return, provided we communicate sensibly." He says that if infections spike, quick action could be taken once more.

Therefore he recommends raising the 50-person threshold per 100,000 inhabitants, which is currently used to classify German regions and cities as coronavirus hotspots. Gassen says this threshold was defined during a time when some 400,000 coronavirus tests were being carried out per week, which produced many positive results. Now, however, testing has been ramped up to three times this number and many results are coming back negative, he says.

Gassen says a new threshold should take into consideration the significant rate of negative test results we are seeing today. He says based on the current situation, a rate of 84 infections per 100,000 would be a suitable indicator. But he is of the opinion that the number is unsuitable anyway as a rigid and sole indicator when it comes to imposing radical public health measures.

Germany also applies the 50-person threshold to determine whether foreign regions classify as coronavirus hotspots. The decision is made based on an analysis by the Health Ministry, Foreign Ministry, and Interior Ministry.

In a first step, the ministries assess which foreign regions or countries recorded 50 or more coronavirus infections per 100,000 inhabitants within the last seven days. Then, in a second step, German authorities check whether regions with lower infection rates could also pose a danger. The updated German list of designated international risk areas can be viewed here (in German).

The European Centre for Disease Prevention and Control, for its part, displays a 14-day-incidence figure on its website. But the agency warns against comparing coronavirus infection rates across different EU states, as this data is generated using a variety of different methodologies. Some countries are mass-testing citizens, while others are not, the agency says. This, of course, has an impact on recorded coronavirus cases.

In an effort to create more transparency, the EU has introduced a traffic light system to highlight high-risk zones in the bloc. Regions with a lack of data are marked grey.

The warning system is based on the rate of new infections per 100,000 inhabitants in the past 14 days, and the percentage of positive tests.

You can find further information about the EU new traffic-light system here.