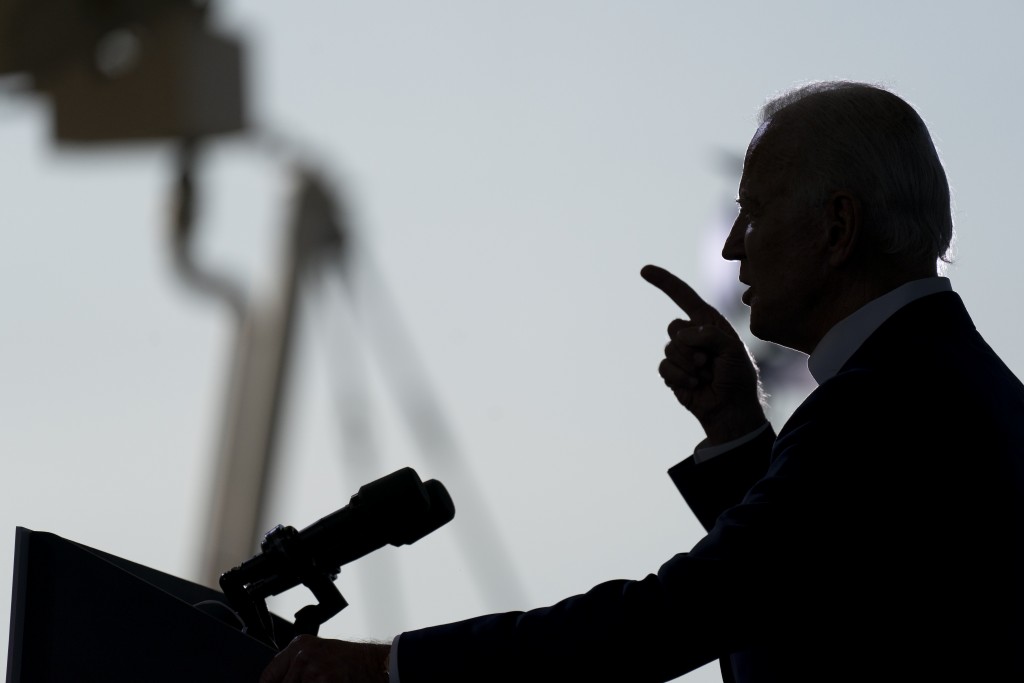 WASHINGTON (AP) — Looking to undermine rival Joe Biden 20 days before the election, President Donald Trump’s campaign has seized on a tabloid story offering bizarre twists to a familiar line of attack: Biden’s relationship with Ukraine. But the story in the New York Post raises more questions than answers, including about the authenticity of an email at the center of the story.

The origins of the story also trace back to Trump lawyer Rudy Giuliani, who has repeatedly pushed unfounded claims about Biden and his son, Hunter Biden. Even if the emails in the Post are legitimate, they don’t validate Trump and Giuliani's claims that Biden's actions were influenced by his son's business dealings in Ukraine.

A look at the development:

HOW DID BIDEN'S SON BECOME A CAMPAIGN ISSUE?

Hunter Biden joined the board of the Ukrainian gas company Burisma in 2014, around the time his father, then U.S. vice president, was helping conduct the Obama administration's foreign policy with Ukraine.

Senate Republicans said in a recent report that the appointment may have posed a conflict of interest, but they did not present evidence that the hiring influenced U.S. policies.

Trump and his supporters, meanwhile, have advanced a widely discredited theory that Biden pushed for the firing of Ukraine's top prosecutor to protect his son and Burisma from investigation. Biden did indeed press for the prosecutor's firing, but that's because he was reflecting the official position of not only the Obama administration but many Western countries and because the prosecutor was perceived as soft on corruption.

The main email highlighted by the Post is a May 2015 message that it said was sent to Hunter Biden by Vadym Pozharskyi, an adviser to Burisma's board. In it, he thanks the younger Biden “for inviting me to DC and giving an opportunity to meet your father and spent (sic) some time together. It’s realty (sic) an honor and pleasure."

The wording makes it unclear if he actually met Joe Biden. The Biden campaign said in a statement it had reviewed Biden’s schedules from the time and that no meeting as described by the newspaper took place.

It's a tangled saga. The Post says it received on Sunday a hard drive containing the messages from Giuliani, who has pushed the unfounded idea that Ukraine was trying to interfere with the 2016 election and that the younger Biden may have enriched himself by selling his access to his father.

The Post says the emails were part of a trove of data recovered from a laptop that was dropped off at a computer repair shop in Delaware in April 2019. It says the customer, whom the owner could not definitively identify as Hunter Biden, never paid for the service or retrieved it, and that the owner made a copy of the hard drive that he provided to Giuliani's lawyer.

Asked via text by an AP reporter how long he had the hard drive, Giuliani replied, “You’re interested in the wrong thing. This time the truth will not be defeated by process. I’ve got a lot more to go."

ARE THE NEW EMAILS AUTHENTIC?

The actual origins of the emails are unclear. And disinformation experts say there are multiple red flags that raise doubts about their authenticity, including verifying that the laptop actually belongs to Hunter Biden, said Nina Jankowicz, a fellow at the nonpartisan Wilson Center in Washington.

The Biden campaign didn't address that issue on Wednesday and Hunter Biden's lawyer did not return an email seeking comment from the AP.

Another potential alarm is the involvement of another Trump associate, Steve Bannon, who the Post says first alerted it to the emails and who along with Giuliani has been active in promoting an anti-Biden narrative on Ukraine.

“We should view it as a Trump campaign product,” Jankowicz said.

Thomas Rid, a disinformation expert at Johns Hopkins University's School of Advanced International Studies, said it was not clear to him yet whether the emails were hacked or forged but said they “could be either or both.”

IF AUTHENTIC, ARE THESE EMAILS DAMAGING TO BIDEN?

The suggestion that Joe Biden might have met with a Burisma representative is consequential, because he has repeatedly insisted that he never discussed his son's business with him.

But the emails provide no details on whether Pozharskyi and Biden actually met and, if so, what they discussed.

If Biden did meet with Pozharskyi, he was not the only U.S. official who may have done so. Pozharskyi was part of a Burisma delegation that lobbied congressional officials in 2014 in an attempt to show that the firm was not a corruption risk.

HOW DID SOCIAL MEDIA COMPANIES RESPOND TO THE STORY?

Companies like Twitter and Facebook, already under pressure to police their platforms ahead of the election, quickly flagged the article and moved to restrict its accessibility online — an action decried by Trump and his supporters, including congressional Republicans.

Facebook spokesman Andy Stone announced on Twitter that the company was working to reduce the distribution of the article on its platform.

On Wednesday afternoon, Twitter began banning its users from sharing links to the article in tweets and direct messages because it violated the company’s policy that prohibits hacked content.

With less than three weeks until Election Day and polls showing him trailing Biden, Trump appears to be returning to the subject of his opponent's family to energize his base.

But in an election dominated by concerns about the coronavirus pandemic, it’s less certain Trump’s strategy will appeal to the voters he needs to win back, including moderate Republicans and suburban women.

Trump's called for a full accounting of Biden's conversations with Hunter and with Pozharskyi. Trump said in an interview with Newsmax that the Post had got Biden “cold” with “serious” allegations.

Biden's campaign, meanwhile, pointed to the recent Republican-led Senate investigation that found no evidence of wrongdoing on Biden's part with regard to Ukraine. It also pointedly noted the involvement of Giuliani, saying his “discredited conspiracy theories and alliance with figures connected to Russian intelligence have been widely reported.”