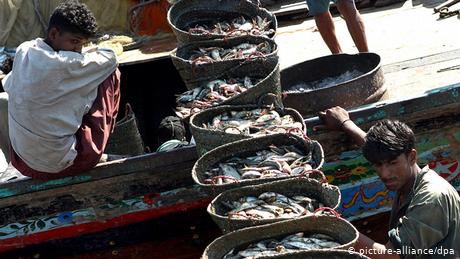 Several fishermen's organizations in Pakistan told DW that the government was planning to grant deep sea fishing rights to Chinese companies as several Chinese fishing trawlers arrived in the southern city of Karachi a month ago.

"Some 12 Chinese trawlers have anchored at a coastal area in Karachi. If authorities do not intend to grant fishing rights to Chinese companies, then with whose permission these trawlers were allowed to dock?" Muhammad Ali Shah, chairman of the Pakistan Fisherfolk Forum, told DW.

"We have taken the matter to the court, which told the government to take all stakeholders into confidence about the issue," Shah said, adding that if Chinese companies get permission for deep sea fishing in Pakistan, the livelihoods of over 2 million fishermen will be affected.

"We will continue to resist these measures," Shah said.

Fishermen's associations in the country's western Balochistan province are also concerned about China's alleged plans to take over the fishing industry. Beijing has invested heavily in their province under the China-Pakistan Economic Corridor (CPEC), a multibillion-dollar infrastructure project.

Khudad Wajo, president of the Gwadar Fishermen Alliance, says that China is preparing to capture Pakistani waters after "snatching" their lands.

"The government does not care about us. It just wants to appease Beijing," Wajo told DW, adding that fishermen's organizations have planned demonstrations against China's increasing involvement in Pakistan's fishing sector.

Pakistan's Sindh and Balochistan provinces have a coastal belt of around 1,050 kilometers (652 miles) along the Arabian Sea. The government generated $410 million (€349 million) in the fiscal year of 2019-20 from the fishing sector.

The Pakistani government in July allowed a Chinese mining company to extend its work on a copper-gold mining project in the insurgency-marred Balochistan province. According to local media, work restarted on the Saindak copper-gold project – a collaboration between Pakistan and China. The mine was initially leased for a 10-year period to Metallurgical Corporation of China Limited, registered locally under the name of Saindak Metals Limited (SML).

Last year, Pakistan's federal government under Prime Minister Imran Khan announced the establishment of the National Coastal Development Authority (NCDA) for the Gwadar port. The decision was severely criticized by opposition parties and activists, who said that the establishment of the institution was unjustified in the presence of a regional coastal office, which carried out the same functions.

Activists believe the decision was taken to appease China, which is pumping over $62 billion into the cash-starved Islamic republic under the CPEC program, part of Beijing's Belt and Road Initiative (BRI). Under CPEC, Beijing has invested huge sums of money into infrastructure development, energy and other projects.

China announced the CPEC project in 2015, as Beijing looked to expand its influence in Pakistan and across Central and South Asia in order to counter US and Indian influence. The CPEC initiative would link Pakistan's southern Gwadar port (626 kilometers, 389 miles west of Karachi) in Balochistan on the Arabian Sea to China's western Xinjiang region. It also includes plans to create road, rail and oil pipeline links to improve connectivity between China and the Middle East.

The government has so far not responded to the fishermen associations' allegation about Chinese trawlers. DW contacted the office of Asif Riaz, federal secretary at the Ministry of Marine Affairs, but he refused to comment, neither confirming nor denying that authorities have granted Chinese companies deep sea fishing rights.

However, a Balochistan government official told DW on condition of anonymity that China's alleged involvement in the fishing sector is creating resentment among the fishermen. "The government did not categorically deny that it plans to give fishing licenses to Chinese trawlers. I think that is why there is so much speculation about it," he said.

But the Fisherfolk Forum's Shah claims the permit has already been given to Chinese trawlers. "The government first advertises the tender, then it issues licenses, and only after that trawlers arrive at the port. Chinese boats have been anchored for over a month. If the licenses were not issued to them, why are they docked at a Karachi port?" he said.

Some lawmakers have expressed concern over the situation. Mir Amer Ali Khan Magsi, the chairman of the parliament's standing committee on marine affairs, told DW that he was surprised at the news of Chinese fishing trawlers arriving in Karachi. "We have been told by the ministry that the government does not intend to give permission to any trawler to operate in deep sea because it is very destructive [for environment]. But who allowed these trawlers to dock at Karachi? We have asked government officials to clarify it," Magsi told DW.

Hafiz Abdul Berr, the chairman of Fishermen's Cooperative Society, alleges that the government has silently approved the fishing permits for Chinese companies. "They did it once in the past, but we challenged it in the court of law," Berr told DW.

The government, however, says that the country needs Chinese investment to bolster its economy. "Chinese companies are investing in Pakistan and are also paying taxes, which will help our economy. If local fishermen have the capacity for deep sea fishing, we'll consider them as well. If they are not capable then they should not oppose government's policies," Muhammad Iqbal Khan, a ruling Pakistan Tehreek-e-Insaf lawmaker, told DW.

Environmentalists say that deep sea fishing should not be allowed in any case. Abdul Rahim, a Gwadar-based environmental activist, believes any such plan will damage the marine ecosystem. "It will also cause depletion of fish, shrimp and other marine life. It would be destructive for the environment."