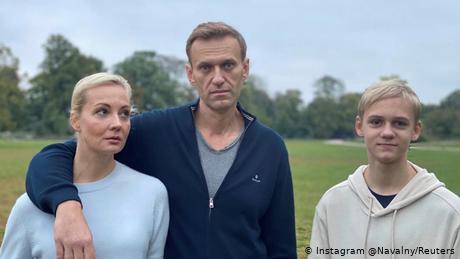 The European Union on Wednesday agreed to sanction six Russians and one organization over the poisoning of Russian opposition leader Alexei Navalny, according to unnamed officials who spoke to DPA and AFP news agencies.

EU ambassadors reportedly agreed to level asset freezes and travel bans during a meeting in Brussels, with exact details to be decided in the coming days.

Navalny, an outspoken critic of Russian President Vladimir Putin, was poisoned with a Novichok nerve agent in Siberia in August. He was evacuated to Berlin where he is now recovering.

Putin's administration has denied being behind the attack.

"We probably simply have to temporarily stop talking to those people in the West who are responsible for foreign policy and don't understand the need for mutually respectful dialogue," Lavrov said at a foreign policy conference on Tuesday.

On Wednesday, he threatened to respond in kind to any sanctions.

Germany and France proposed measures against Russia last week, saying that in addition to sanctions against "individuals ... who by virtue of their official function are considered responsible for this crime and the breach of international law," action should also be taken against a body "that is involved in the Novichok program."

The EU measures are expected to come into force on Thursday. According to sources cited by news agencies, the targeted individuals include officials from Russia's security apparatus, while the implicated organization is the State Research Institute of Organic Chemistry and Technology.

The EU previously sanctioned Russian intelligence officials in the wake of the 2018 Novichok poisoning of ex-Russian double agent Sergei Skripal and his daughter in the UK.