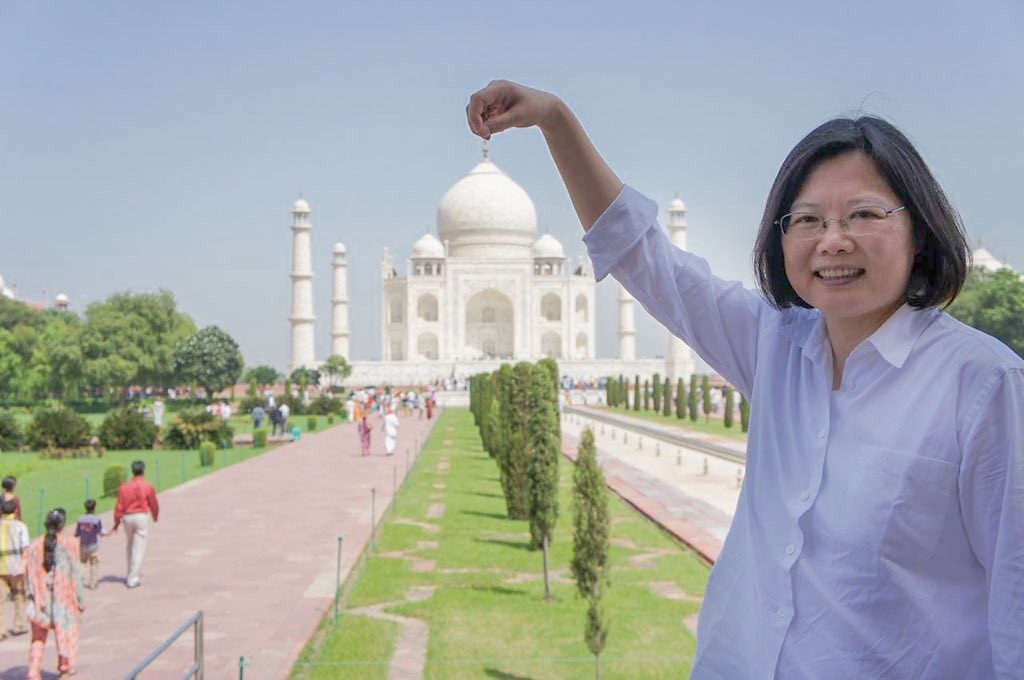 TAIPEI (Taiwan News) — President Tsai Ing-wen (蔡英文) took to Twitter Tuesday (Oct. 14) to greet Indian netizens who have shown support for Taiwan amid rising tensions in the Taiwan Strait and intense stand-offs at the Indian-Chinese border.

“#Namaste to our friends from #India!” Tsai tweeted. She expressed her appreciation for the increase in Indian followers on her Twitter, which is one of the most followed accounts among Taiwanese politicians.

Tsai stated, “Your warm regards remind me of fond memories from time spent in your incredible country, your architectural marvels, vibrant culture & kind people are truly unforgettable.” In addition to her message, she shared photos of herself taken at the Taj Mahal, including one showing her pinching the top of the world-renown marble mausoleum with her fingers—a typical pose tourists make when visiting the heritage site.

The post quickly garnered genial reactions from Indian netizens. Some tweeted Tsai back with messages of appreciation and expressed support for Taiwan, while others posted images depicting the Taiwanese and Indian flag together to show solidarity. Tsai’s friendly gesture follows a recent surge of interest from both India’s media and netizens in developments in the strait.

Tsai's tweet appeared to have also referenced an incident in which a row of National Day flyers depicting the Taiwanese flag was posted on the street outside the Chinese embassy in New Delhi. The stunt was a protest in response to Chinese interference in Indian media’s coverage of Taiwan.

India's relations with China have worsened as border clashes between Indian and Chinese troops in the Ladakh region have increased. With no resolution in sight, Indian netizens seem to have found themselves an informal ally in Taiwan which has long faced military coercion from China's People’s Liberation Army (PLA).

Whether the Indian media's newfound fondness for Taiwan and President Tsai comes from sufficient awareness and knowledge of cross-strait relations remains to be seen. Nevertheless, it has provided the Taiwanese government an opportunity to attract greater attention from people in neighboring countries to counter China’s increasing threats and to promote Taiwan as a nation that values democracy.