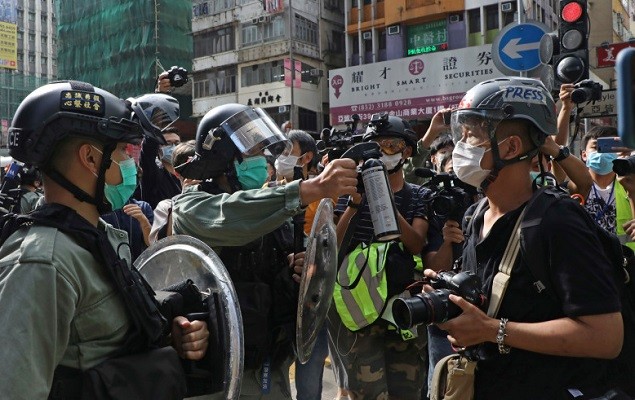 The UNHRC was established in 2006 as a subsidiary organ of the General Assembly (GA) focused on the promotion of "universal respect for the protection of all human rights and fundamental freedoms for all." It was conceived to take up and make recommendations on the rights issues of the day, "including gross and systematic violations."

China has drawn broad international criticism over its repressive policies in Tibet, assault on the freedoms guaranteed to Hong Kong under the city's Basic Law, and the virtual police state in Xinjiang, where it has interned over a million Muslim Uighurs in concentration camps.

The UN elects 47 of its 193 member states for three-year terms in staggered elections. At stake at the UN headquarters on Tuesday were 15 seats to represent five regions from 2021-2023.

China, Nepal, Uzbekistan, and Pakistan filled the four vacant spots for the Asia-Pacific with 139, 150, 164, and 169 votes, respectively. Saudi Arabia, still plagued by its involvement in the Yemeni Civil War and the 2018 murder of a Washington Post journalist, received only 90.

Cuba and Russia ran to represent their respective regions uncontested.

China's Permanent Mission to the UN voiced its "heartfelt gratitude" to fellow member-states for their support" and touted the success of human rights — with "Chinese characteristics."

However, support for China's fourth-place finish was down more than 22 percent from the 180 votes it received in 2016. Human Rights Watch Executive Director Kenneth Roth took this as a sign of waning influence in the organization, tweeting that "The fear [of China] is melting."

The bad news: governments just elected China to the UN Human Rights Council despite its severe repression in Xinjiang, Tibet, and Hong Kong.

The good news: the number of governments voting for it declined from 180 last time to 139 now. The fear is melting. pic.twitter.com/TwufIahrf7

In a statement worded to support human rights with Chinese characteristics, China's delegation said, "There is no universally applicable model, and human rights can advance only in the context of national conditions and people’s needs."

GA resolution 60/251, which led to the establishment of the UNHCR, calls human rights "universal, indivisible, interrelated, interdependent and mutually reinforcing. It also states that "all States, regardless of their political, economic and cultural systems, have the duty to promote and protect all human rights and fundamental freedoms."

American Secretary of State Mike Pompeo took the UNHRC to task in a press release, writing that the election of countries with "abhorrent human rights records" such as China, Russia, and Cuba justifies the Trump administration's withdrawal. The U.S. exited the UN organ in 2018 citing its inclusion of human rights violators and anti-Israel bias.

China's return to the body drew similar criticism on the other side of the Atlantic. During a Constitution Committee meeting in the House of Lords on Tuesday, MP David Alton lamented: "It seems rather like the burglar and the watchdog becoming one and the same thing when China has such a leading role in an organization of that kind."

She pointed to a letter jointly written to the Chinese government by seven UN special rapporteurs concerned about Hong Kong's national security law's "chilling effect on civic space." She also cited a letter by 321 NGOs calling for an investigation into human rights abuses by China as well as a declaration by 39 UN member states pressing the authoritarian nation to allow international observers access to Xinjiang.

Ou remarked that it is UNHRC members' duty to "fully respect and protect the freedoms of speech, religion, and assembly, starting with their own domestic human rights."

Chinese state-run tabloid the Global Times said China has been unfairly targeted by Western politicians, media, and NGOs, whom it accused of "hyping its policies in Xinjiang and Tibet regions." It cited an expert from a CCP-affiliated think tank as stating that Western critics had exploited the election to pressure China by "sensationliz[ing] things."