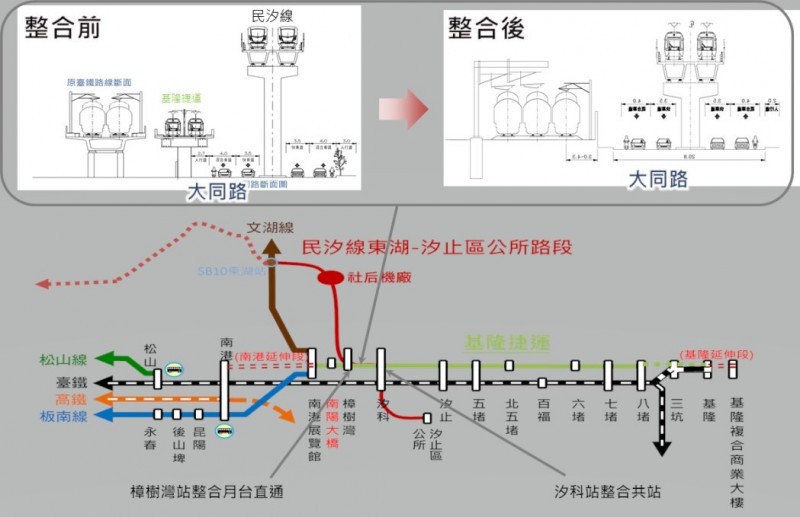 TAIPEI (Taiwan News) — Three Taiwanese mayors and the transportation minister on Tuesday (Oct. 13) announced that they will be upgrading the Taipei-Keelung LRT line and push for the extension of the Taiwan High Speed Rail (THSR) to Yilan, among other major changes to expand the transportation network in Greater Taipei.

The four leaders announced during a press conference that they had reached the following five preliminary agreements:

1. Upgrade of Keelung LRT to LRRT

The planned light rail system for Keelung will be upgraded to a light rail rapid transit (LRRT) system to enable it to carry a higher passenger volume and that it will be enabled with automatic train operation (ATO). The more robust LRRT system will be able to carry 10,000 to 15,000 passenger trips per hour, a far cry from the 5,000 targeted with the original light rail trains.

2. Terminal in Taipei will be underground at Nangang

The terminus of the Taipei-Keelung LRRT at the Nangang Exhibition Hall MRT Station will be underground in order to facilitate the transfer of passengers to THSR and Taiwan Railways Administration (TRA) trains at the Nangang Railway Station.

3. Minsheng-Xizhi Line to be integrated with Keelung MRT

As the future Minsheng-Xizhi and Keelung LRRT lines are parallel to Datong Road from Zhangshuwan to Xike, the two lines will share the same tracks in that section to streamline construction and facilitate the transfer of passengers.

The new light rail line will run from Nangang to TRA's Badu Station, in Keelung's Nuannuan District. As for additional stops in Keelung after Badu, different options are being evaluated and planning and discussions will continue.

5. Extension of THSR to Yilan

The leaders also agreed to extend THSR from Nangang to Yilan in order to reduce congestion on National Freeway Five and crowding on the TRA trains. They emphasized that the new route would avoid the watershed of the Feitsui Reservoir.