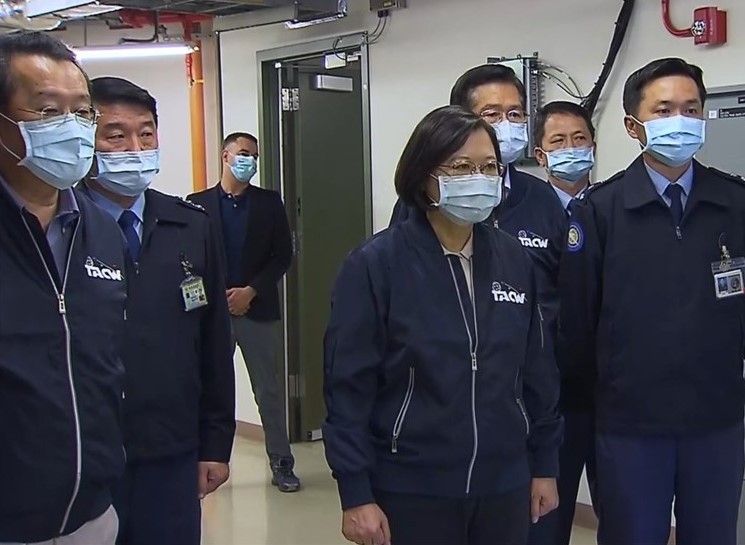 TAIPEI (Taiwan News) — The Taiwan Air Force Command issued a press release Tuesday (Oct. 13) stating that a foreign national spotted in a photo taken during President Tsai Ing-wen’s (蔡英文) recent trip to the Leshan radar station was an American technical advisor assisting in the maintenance of the sophisticated radar system.

President Tsai on Tuesday paid a visit to the radar station as part of her administration’s efforts to boost morale in all branches of the military. In one of the photos of her trip, a foreign man was spotted in the background, prompting suspicions that the unknown person was an American military advisor.

The Air Force stated Tuesday evening that the advisor was dispatched by the U.S. in accordance with a previous arms sale agreement to assist with radar system operations, ensure proper equipment maintenance, and advise on consolidating Taiwan’s air defense, CNA reported. The Air Force also called on the public to refrain from speculation.

The Leshan radar station is located in Hsinchu's Wufeng Township and houses a Cold War-era Precision Acquisition Vehicle Entry Phased Array Warning System (PAVE PAWS) early warning radar. The radar was purchased from the U.S. in 2000 and commissioned in 2013.

The addition of the PAVE PAWS has significantly improved the nation’s early warning capabilities, as it can detect and monitor threats 5,000 kilometers away. National security staff pointed out that this range nearly encompasses an area spanning northeast to southeast Asia.

As China ramps up military activity around Taiwan, the Leshan radar station is able to quickly provide Air Force personnel with intelligence to facilitate rapid responses to incoming threats.